This Is Your Market On Deflation

This Is Your Market On Deflation

“Let me end my talk by abusing slightly my status as an official representative of the Federal Reserve. I would like to say to Milton and Anna: Regarding the Great Depression. You’re right, we did it. We’re very sorry. But thanks to you, we won’t do it again.”  Ben Bernanke on the occasion of Milton Friedman’s 90th birthday

Bernanke was referring to deflation in that quote and I hate to be the bearer of bad news, Mr. Bernanke, but not only have you allowed it to happen, you’ve allowed it to happen three times on your watch. I know that seems hard to believe and I’m sure you would deny it, but the fact is that the recent fall in the stock market, commodity prices and bond yields in conjunction with the rise in the US Dollar – regardless of the cause – is evidence of exactly what you promised Milton you wouldn’t allow.

Inflation and deflation are not the change in the Consumer Price index or any other measure of consumption price changes the Fed chooses to follow. These indices are nothing more than an alternative, non market, means of measuring the purchasing power of the US Dollar. To put it more simply, they are attempts at measuring the value of the US Dollar. If that’s what they are – and I think most economists would agree with that definition – one has to wonder why these alternative measures were chosen to guide monetary policy rather than the real market indicators that already exist. I’ll leave that to readers’ imaginations for now. Furthermore, if the market based indicators diverge with the government manufactured version, which one should we believe? Mr. Bernanke obviously chooses to believe the government, non market version. Long time readers will not be surprised at my demurral.

Here’s the proof of Bernanke’s failure to understand inflation and deflation: 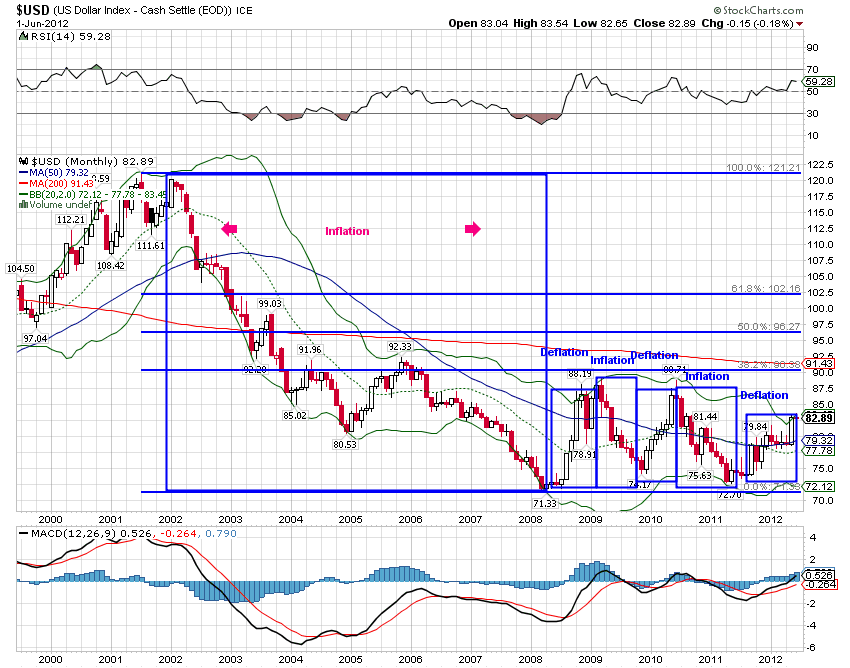 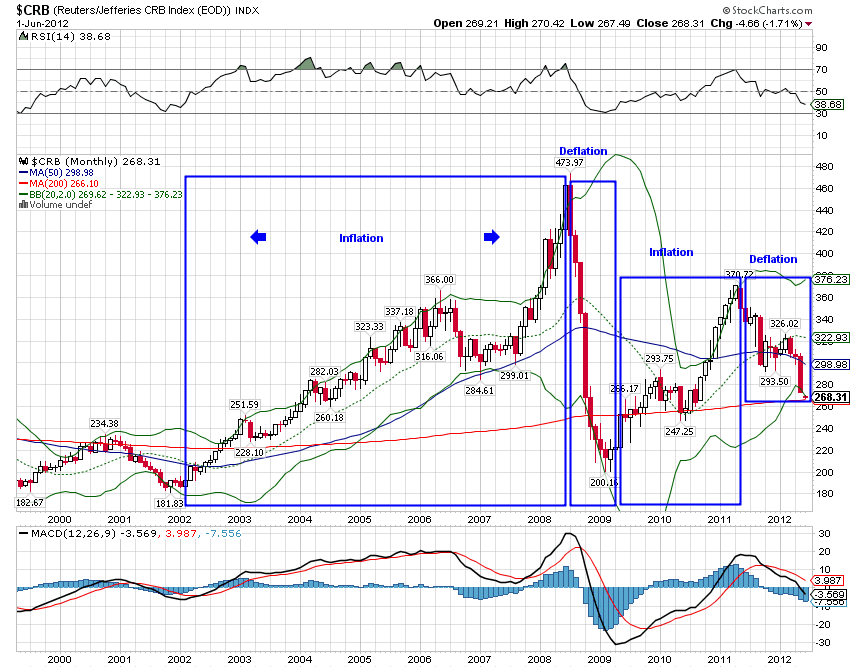 If that’s not enough, here’s another one: 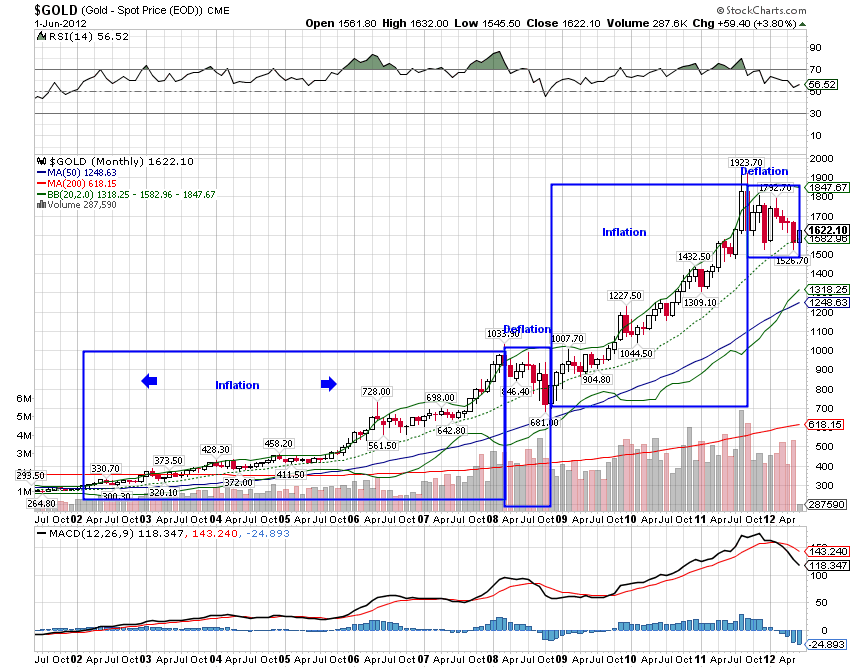 And one last one: 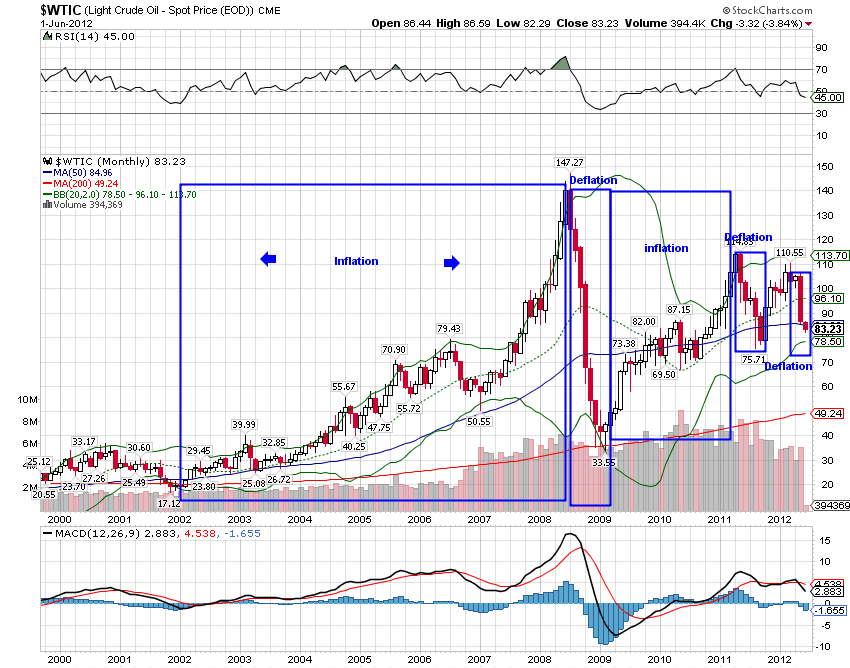 None of these measures, by themselves, is perfect. Crude oil, for instance, is subject to supply/demand shocks that could affect the price even if the value of the dollar hasn’t changed. But taken together, these real market prices give us a good indication of the value of the dollar. I’m sure there are others that might also be useful for judging the effects of monetary policy.

If this was all the information you had, you might say, well you know those inflationary periods were sure better than the deflationary ones. Give us some more of that. Unfortunately, it is the inflationary period from 2002 to 2008 that is the source of most of our troubles today. And to go back even further, it is the long period of a volatile dollar value that got us in this mess and it spans more than just the Bernanke era. One can’t help but notice as well that crashes followed each period of extreme dollar movement (1987 stock crash, S&L crisis, dot com crash and of course the most recent real estate bubble and crash): 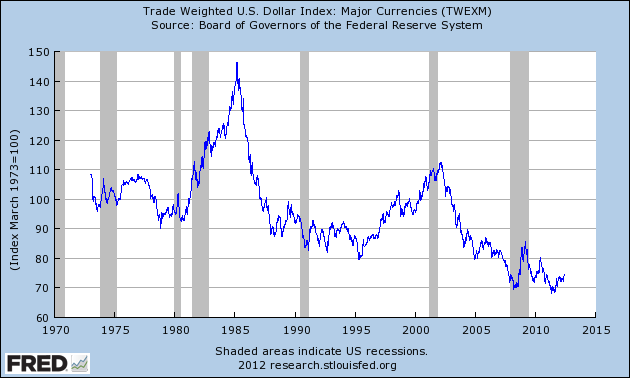 The same can be said about my short list of market indicators. The value of the dollar relative to other currencies is obviously affected by not only what happens in the US but what happens in other countries where we have no control over economic policy. The fact is that there is no way to accurately measure the value of the dollar or any other currency. However, with the last several decades of bubbles, collapses and reflations, it should be obvious to everyone that using a price index based solely on consumption goods is not sufficient to conduct proper monetary policy. Asset prices – stocks, gold, commodities, real estate, etc. – provide important signals about the value of the dollar that when ignored produce the volatility we’ve seen over the last several decades. The goal of monetary policy should be to stabilize the value of the dollar, taking into consideration all measures.

One thing I think we can say with confidence is that the inflation that immediately preceded our current difficulties was so large that it can be taken at face value. The devaluation of the dollar relative to the currencies of our trading partners, gold, real estate and the general commodity indices is too large to ignore no matter what happened to the CPI. And as happens with all inflationary episodes, the end of the inflation ushers in a period of distress as prices adjust downward (or try to in the most recent case). For historical perspective, one could review several post war periods in US history. It is not coincidence in my opinion that this most recent inflation occurred during a war. Governments have often resorted to inflation to pay for war in order to obscure its true cost.

The US abandoned the gold standard for the War of 1812 and the Civil War. We stayed on the gold standard during WWI but most of the world did not and the new Federal Reserve did inflate by purchasing bonds (there are reasons they were able to do this while staying on the gold standard but they aren’t relevant to this discussion; suffice it to say that WWI was an inflationary event.) In each case, after the war, the US returned to a gold standard at the pre-war price and the result was deflation and depression. It should be noted as well that the deflationary episodes ran their course in a relatively short period of time and the economy recovered at the pre-war price level. It should also be noted that the government in each case basically did nothing to alleviate the pain of the deflation. The cure for the deflationary depression period was reduced government spending, reduced taxes and time. No “stimulus” spending was required.

Ben Bernanke’s serial inflations and deflations are an attempt to avoid the depression associated with sustained deflationary episodes. Periods of quantitative easing reduce the value of the dollar and the periods with no QE see the dollar rise. Asset prices are more sensitive to the changes in monetary policy and until monetary policy is stabilized they will remain volatile, rising during the inflationary periods and falling during the deflations. When one adds in the effects from the Chinese slowdown and the European debt crisis the resulting environment is so confusing that many investors have just withdrawn to the sidelines. This contributes to the market volatility by reducing the depth of markets.

The question policy makers must answer is how do we get out of this mess? One increasingly popular idea on both sides of the political aisle is nominal GDP or nominal income targeting. This monetary regime ignores inflation and concentrates instead on producing a constant rate of nominal growth. There is some intellectual support for such a regime. George Selgin has pointed out that von Mises ideal monetary system could be equated with nominal GDP targeting (Cato journal). While that might provide some intellectual cover for modern supporters, particularly of the conservative variety, it does not reduce the difficulty of implementing such a system or the immediate consequences which I judge to be inflationary. While the Fed might be able to generate a 5% rate of growth in nominal GDP, the effect on real growth is unpredictable at best. The US economy is growing right now at roughly 2% real growth and 2% inflation for a nominal growth rate of 4%. Raising that growth rate to 5% could easily – and I think at best – produce 2% real growth and 3% inflation. Or it could produce 1% real growth and 4% inflation which I think is actually more likely. Another thing to consider is that no one knows what an ideal NGDP growth target would be. Should it be 5% or 6% or 4%? The Fed could theoretically hit just about any target but would it be the right one?

The key to real growth does not lie with monetary policy but rather fiscal and regulatory policies. If the Fed shifted to NGDP targeting and nothing changed on the fiscal side of the equation the likely result is more inflation. If the Fed’s recent limited episodes of QE have caused the dollar to fall, imagine what an open ended commitment to monetary expansion in pursuit of 5% nominal growth would do. There is one benefit of shifting to such a monetary regime that shouldn’t be ignored though – the political. If the Fed can convince everyone that they only have control over nominal values of the economy it places enormous pressure on politicians to get the real side of the equation correct. If NGDP targeting produced 5% inflation and 0% real growth, the Fed could rightly say that the blame lies in other policies.

Another positive aspect of NGDP targeting is that, if done correctly, it would make monetary policy predictable but that doesn’t solve the problem of determining the correct target. I think over the long term, an NGDP targeting system would probably produce a stable dollar but it would take many years of trial and error to produce it. While I believe a gold standard is the best monetary system available, it too suffers from the problem of determining a proper target value. If the target is set too low, we’ll have deflation until we reach equilibrium. If the target is set too high, we’ll have inflation until we reach equilibrium. In either case though, we will reach equilibrium in a relatively short period of time. NGDP targeting would just be another amorphous target subject to the same debates as the current inflation targeting system. And it would, of course, be subject to the same political pressures.

As I’ve said many times in these weekly missives, our economic problems are not difficult to solve except in the political sense. We need to stabilize the value of the dollar (using a better definition, preferably gold), cut government spending, cut taxes (while shifting them more to consumption preferably) and simplify our regulatory structure. In concept that isn’t hard. In execution, it is a political Gordian Knot and cutting it gores a lot of oxen. In the end we will be forced to do the right thing as Europe is finding out now. We can either get on with it or wait for the market to force our hand. In the meantime, we should avoid popular, simple minded monetary nostrums that may just add to our current problems. Economic policy – monetary and fiscal – must be coordinated.

Until we finally address our fiscal problems, expect Bernanke to continue his repeated attempts to stave off the inevitable. The effect of repeated QE will eventually be stagflation. The only upside to that outcome is that we know how to solve it having done it once before in recent history. While we’re waiting for that outcome, expect markets to continue their volatility. “Risk assets” will rise during the inflationary episodes and fall during the deflationary ones. That is the secular bear market and it isn’t over yet.

For information on Alhambra Investment Partners’ money management services and global portfolio approach to capital preservation, Joe Calhoun can be reached at: jyc3@4kb.d43.myftpupload.com or 786-249-3773.