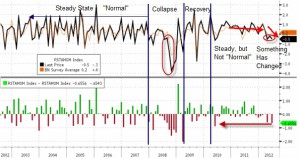 There is clearly downside risk brewing in the real economy. As much as central banks would like stock prices to be considered equivalent economic indicators, the real economy is a much harder nut to crack.

The economic accounts show, nearly uniformly, the same pattern and tendencies. The recovery, such that it was, ended in the middle of 2010. Since that time, dependent on the piece of economic data being analyzed, the second derivative trend has been lower, treading water at best. This all adds up to an economy that is operating under severe constraints, an economy that does not look anything like the previous pre-crisis era. And that confounds policymakers and economists.

Retail sales, for example, shows rather clearly the different phases of the economy as it progressed through collapse and recovery. On the other side of recovery is this sputtering “steady state”. While not showing the deceleration that other economic accounts have, such as business investment, the healthy “amplitude” has been replaced by what is being called a “muddle”. Unfortunately, it very much appears as if the muddle that has at least existed since mid-2010 has again changed. Retail sales appear to be joining business investment in the second derivative change downward.

The explanation is quite simple. Another economic account, one in which I would place a much more emphasis, has been signaling warning for more than a year. Real income growth has been trending lower since 2010 as well, but real income on a per capita basis has been shrinking since the April 2011 (some call this negative growth, I just call it contracting). The recession-recovery period passed without a serious correction toward a positive trend in employment, meaning the recovery was in trouble from the very start.

To maintain the post-recovery muddle required a serious correction in the personal savings rate – from a high of around 6% in mid-2010 all the way down to 3.2% earlier in 2012. Without that decline in the savings rate personal spending and consumption would have likely contracted long before 2012. The savings rate has backed up toward 4%, and it appears retail sales are following that.

As much as Europe steals the headlines, the American economy is, quite on its own, perhaps breaking out of its muddle phase. More and more data and trends confirm that possibility. That would not be a good development. 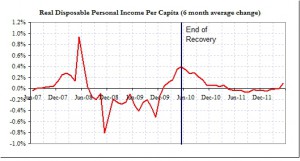