Market perceptions of risks to the global economy and general liquidity have diverged among various markets – credit markets in certain regions indicate heightened risk awareness and perceived probabilities, while equities, the US market in particular, looks increasingly like it has under central bank interventions from the recent past. Negative yield curves in particular European sovereigns (Swiss, German, Holland, etc) are indications of extreme currency risk. The Swiss curve, in particular, is often negative out to 6 years, demonstrating that elements within the financial system are willing to take on a penalty yield in order to diminish potential currency shifts.

In the US stock market, on the other hand, complacency has returned to levels seen during the last two episodes of massive central bank manipulations. There was the run-up after Chairman Bernanke’s August 2010 Jackson Hole speech that telegraphed Fed policy for the next ten months, coming during a summer of economic deceleration and market uncertainties. In December 2011, the ECB announced a major expansion of its balance sheet, combined with an unprecedented 3-year term of central bank liquidity, concurrent with the Federal Reserve’s cut in the dollar swap arrangements to OIS + 50bp (from OIS + 100bp). These moves came after an extended period of economic deceleration and market uncertainties.

In August 2012, we find ourselves in similar circumstances: economic deceleration and market uncertainties. The degree and scope of economic malaise is much more pronounced this time, however. Despite the known unknowns, and the potential for unknown unknowns (Iran, drought), US equities curiously find themselves in the same pattern as the markets of the previous central bank episodes. 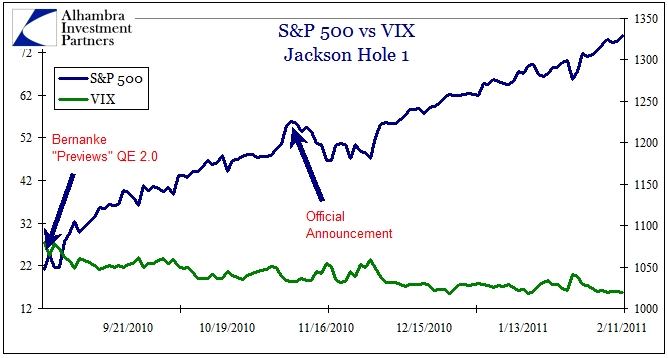 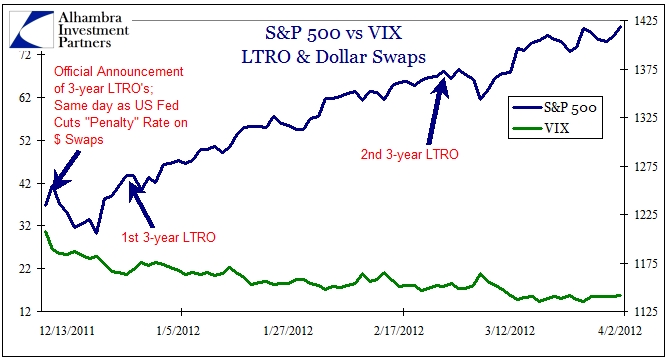 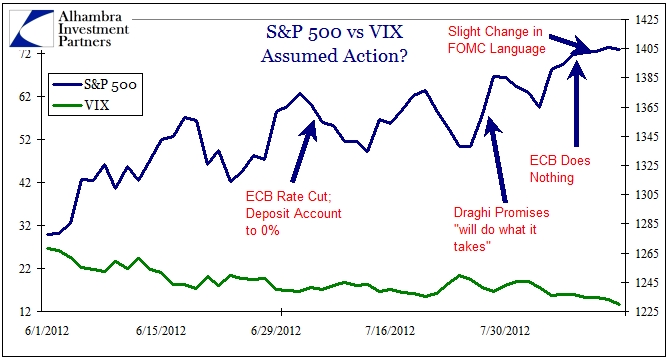 The QE 2 & LTRO episodes were preceded by actual announcements of further central bank intentions. There was little doubt as to what was about to unfold at these central banks, or more specifically with their balance sheet expansions. Market risks were seen as high when the announcements were made, diminishing over time as the operational pace of central bank programs began and ran their course.

This market, however, has seen no such announcement or any similar degree of certainty as to whether there will be one. In other words, the equity cart is squarely before the intervention horse. The level of perceived risk (volatility) right now is on par, actually even below, the end stages of the previous two episodes. Stocks right now are acting as if central banks have already finished interventions.

Stocks are now front-running potential interventions, unwilling, it seems, to wait for some degree of confirmation. Perhaps perceptions of risks are not as closely aligned with real conditions as central bankers would like markets to believe? The divergence with bonds is even more pronounced when analyzed from this perspective and suggests that stocks care far more about whether some central bank is expanding its reach into the marketplace. Whether it actually works or not is apparently irrelevant, making stocks a mockery of circular logic and self-fulfilling prophecies. Maybe this time will actually be different and a real bull market awaits the next balance sheet program and extreme volatility is over, but that might require a sub-zero VIX at this point.