In the context of the now-permanent establishment of QE, there was little note of the downward revisions to the Fed’s economic “forecast” for both 2012 and 2013. The revisions were minor in the, of course, downward direction, but we just need to give them time to be fully downgraded.

Last December, the FOMC said the following with regard to economic progress:

“…the staff continued to project that the pace of economic activity would pick up gradually in 2012 and 2013, supported by accommodative monetary policy, further increases in credit availability, and improvements in consumer and business sentiment. Over the forecast period, the gains in real GDP were anticipated to be sufficient to reduce the slack in product and labor markets only slowly, and the unemployment rate was expected to remain elevated at the end of 2013.”

Back in the middle of 2010, the economists at the CBO looked forward to 2012 and 2013, “project[ing] that real GDP will increase by an average of 4.4 percent per year, which would close the output gap completely by the end of 2014.” We are not going to get anywhere near that growth in 2012, but the CBO’s economists are undaunted. In their August 2012, update, they forecast,

“The pace of economic expansion will average 4.3 percent from 2014 through 2017 although the economy will continue to operate below its potential level until 2018.”

They don’t seem to want to give up those longings for 4% real growth, though at least they acknowledge, now, that their calculation of the output gap is an unrealistic goal anytime soon. The recovery is coming, you see, it’s just always next year.

On January 8, 2011, Federal Reserve Vice Chairman Janet Yellen highlighted her expectations, due entirely to mathematical simulations of economic parameters, that by mid-2012 the Federal Reserve would begin exit policies from the then two episodes of QE. In her simulations, the Fed would run off about $80 billion per month, fully normalizing the bloated balance sheet in time for the economy to reach full potential in 2017 (only a year off the CBO prediction).

Now, not even two years hence, the Fed balance sheet is again moving in the upward direction toward continued monetary debasement, not downward toward anything remotely like an “exit”.

Lest anyone get the idea that bad economics is provincial, the Europeans have been offering the same bad patterning as economists here stateside. For their part, economists at the Bundesbank in Germany just downgraded their expectations for economic growth in that country last week. As recently as June of this year, Bundesbank economics simulations forecast 1.6% growth for 2013. Revisions now simulate all the way down to near zero, at 0.4% for the full year. Current year 2012 GDP growth has been revised down all the way to 0.7% (with a full contraction in Q4).

The ECB, never to be outdone by Buba, has had its own Fed-like pattern of repeatedly expecting normal cyclical recovery patterns. 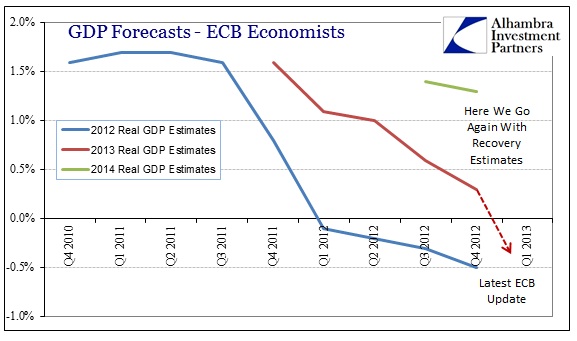 Despite the dead-weight of Spanish, Portuguese and Greek economies, the ECB was still seeing 1.7% growth in the Eurozone for 2012 as late as September 2011. The operative economic theory, incorporated into the math and simulations, was that the “core” of Europe would robustly pick up the periphery, with strength in Germany and France filling in the slack of the PIIGS, until the whole system recovered nicely in the cyclical glow of pattern confirmation. It wasn’t until early this year that those estimates were revised into contraction as the shock of the converse narrative began to set in – that the periphery would not bootstrap with the strong core, instead it would sink the entire continent.

Even still, despite confirmation and admissions of re-recession, ECB economists continued to expect “normal” cyclical growth only pushed out one year. Now, with the declining German and French fortunes, those 2013 expectations have swallowed into recession with them.

The problem here is actually two problems. First, the entire suite of policy regimes in the developed world are designed around exceedingly and unendingly bad simulations that lack even a twang of competent forecasting. The implementation of QE 3 and now QE 4 has to be, on more than one level outside of Janet Yellen’s failed expectations, explicit admissions of not only forecasting failure, but full failure in concept, design and implementation. The math part of this equation is simple to digest – because economists believe monetary policy actually works, they expect it to work, and thus incorporate that expectation into the simulations they use to justify themselves. That is nothing more than the same circular logic that bedeviled the ill-conceived “stimulus” bill (ARRA). Every new monetary program leads to these 4% growth expectations, only pushed further and further into the future.

It never occurs to economists as to why these delays keep appearing, and forecasts are constantly revised in only one direction.

The second, more immediate problem is a related symptom of that circular mathematics. Every economic data point begins in trend-cycle analysis where each series really only measures variations around an assumed baseline or benchmark. If those benchmarks and baselines are crafted using the same flawed theory as the predictions above (and they are) then over time the data becomes riddled with similar downward revisions (which it has). In other words, even the economic data we see now is victim of this cyclical and upward bias to the point that the current period of lackluster data is likely even more disappointing. But that will only become apparent upon benchmark revisions (which markets, in particular these shorter-term trading markets, ignore).

Recessions catch economists unaware because they are not “tail risks”. The recession in Europe is not a random error term or low probability “trajectory”, it is common sense. The same holds true for the US. Recession is not a tail risk, it is the logical pathway for any economic system that actively engages in monetary repression (expelled into the system as contracting personal income, in this current case). As long as economists continue to believe in these tail risks, they will continue to be beguiled by “unexpected” weakness and “headwinds” that lead to data revisions and forecast errors in only one direction.

It seems the only true independent variables in econometrics are time and gullibility.