Earlier in the week I outlined the relationship between gold and collateralized liquidity in the banking system. In a second post, I put together the pieces of what may currently be driving growing illiquidity, with particularly emphasis on Europe. This post intends on adding detail and evidence to this cumulative analysis.

First, we need to step back a moment and review the global financial system as it relates to the flow of “money”. Central banks have the ability to create “money” (or the modern facsimile of ledgers or accounts of digital currency) but their beneficence ends there. The actual plumbing of the financial system is a bit more complex, and therefore susceptible to additional factors.

Prior to August 2007, banks essentially funded themselves through their own balance sheet expansion. Any additional funds could be lent and borrowed in wholesale markets. These money markets were unsecured means of “liquidity” flow, where banks simply moved digital currency from one account to another and back again at a stated interest rate. In eurodollars, the interest rate is LIBOR (of whichever tenor or maturity); in domestic money it is the Fed funds market. Central banks only “fine tune” in these markets through the injection or removal (called open market operations) of these privately created reserves,.

Open market operations involve the purchase and sale of securities (mostly government debt) from “primary dealers”. The central bank expects the reasonable flow of funds from the primary dealers into the wider banking system through these unsecured wholesale markets.

The panic of 2008, however, has changed this pattern of global monetary flow. The unsecured markets no longer function at anything close to the pre-crisis period. In fact, marginally, there is little to any flow at all.

This is not a vibrant wholesale money market; it is a zombie relic. Without an unsecured method of flowing funds, the interbank system has fallen back onto the secured funding markets: repo.

Unlike unsecured lending, repos require a matching of demand for secured lending and supply of usable collateral. This introduces a myriad of complications in assessing broad liquidity conditions. In other words, there may exist a supply of ready “cash” to be flowed into the wider system, but without sufficient collateral it cannot flow anywhere. Right now, primary dealers (and their mega bank counterparts in Europe) have a lot of reserves on balance with the central bank but without enough usable and acceptable collateral held by second and third tier banks those reserves remain idle.

According to DTCC, repo volumes in US Treasuries have ticked up recently, but we have seen a large concurrent decline in agency and MBS collateral. 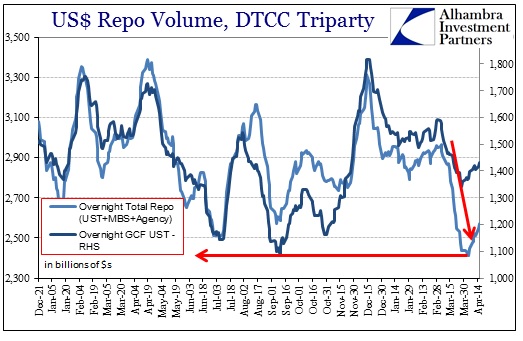 That result can also be seen in data from the Primary Dealers themselves, collected by the Federal Reserve Bank of New York. 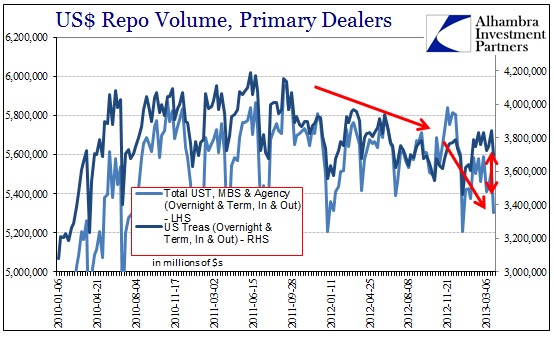 US Treasury volume has increased marginally since the middle of last year while agency and MBS volumes have come down significantly. 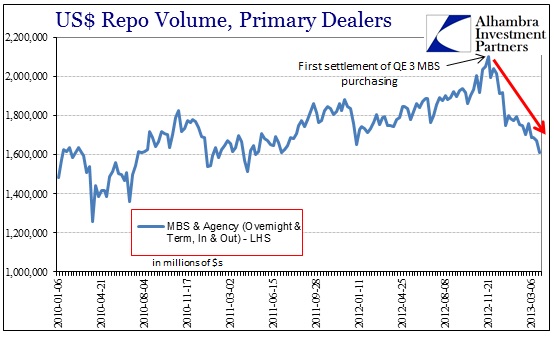 The timing of the decline is not simple happenstance. Though the Fed announced QE 3 and the purchase of MBS in September 2012, the first actual settlement did not happen until November 14. Since that point, the total amount of MBS falling out of the repo pool has grown considerably.

The decline in MBS/agency repo is also demonstrated in SIFMA data for overnight general collateral repo. 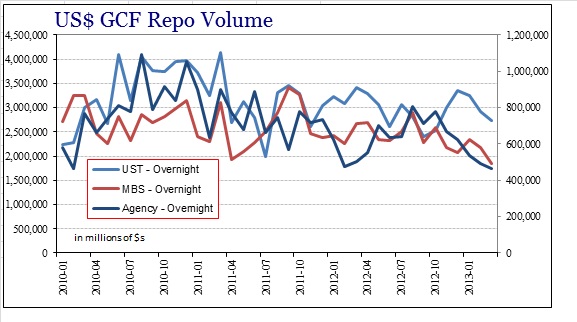 Repo trading in overnight US Treasuries has rebounding in past six months, but only to absorb some of the overall decline in the other markets. 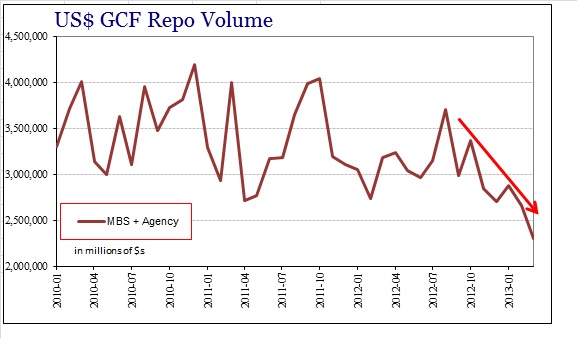 As a result, repo volumes in total have declined at a marginally slower pace than the MBS/agency markets, but have declined nonetheless. 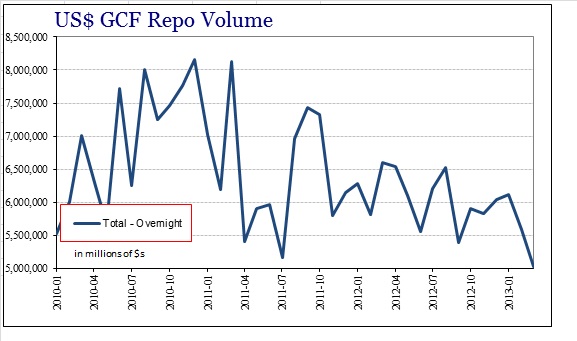 Without repo volume running through MBS/agency repos, the takeup in the US Treasury repo market means a greater potential for shortages there. Unlike the MBS and agency repo markets, US Treasury repos have a 3% fail penalty. That means a repo fail would only occur under conditions of growing or extreme stress. 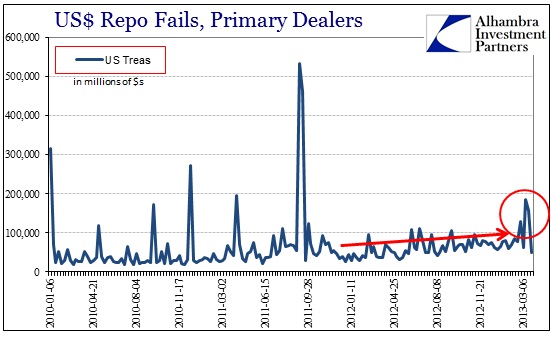 The spike in fails in the middle of the chart above corresponds with the dollar shortage in September 2011. While the current rise in fails is to a far lower degree, the fact that it has been somewhat sustained (rather than a short, sharp rise) is indicative of persistent collateral tightness in the US Treasury repo market.

But repo funding for the US $ is only a partial picture. Given the events in Europe, we also need some kind of analysis of liquidity conditions there. Unfortunately, European repos are mostly OTC, meaning there is very little information about the quantity or levels of European collateralized funding. At best we have the semi-annual ICMA survey which collects data on the European repo markets.

The latest survey, for December 2012, indicated a marked decline in repo activity:

“ICMA’s ERC data shows the total value of outstanding European repo contracts, under which banks pledge securities as collateral in return from funding from money market managers and other investors, stood at €5.611 trillion on 12 December 2012; indicating a 9.5% reduction in business since December 2011 when the figure was €6.2trn.”

The primary culprit for the loss of repo volume was the LTRO’s. The ICMA indicated a lower demand for funding as banks drew from the central bank, but it should also be noted that the LTRO’s removed collateral from the system in much the same method as QE. According to a Financial Times interview, Richard Comotto of ICMA noted declining liquidity seen in the report.

The latest “significant” fall in the volume of repo transactions pointed to a “stagnant” market, reflecting “a general decline in liquidity even as confidence in the wider market was improving”, Mr Comotto added.

In another clue to declining European repo, Markit in February noted a dramatic decline in income from repo lending on government bonds. Low or zero interest rates have cut down on the spread banks can earn from lending out collateral in their inventory. If spreads get cut down too low, “good” banks will pull back their inventory and leave the repo markets far too tight.

If we put all these pieces together, along with the events of the past few months, we begin to see how funding in secured markets could be far more stressed than any outward signs indicate. These funding markets are more than opaque, they are often esoteric and counterintuitive, not easily discerned by traditional means of assessment and evaluation.

However, if hidden stress were to explode into other financial segments – such as gold as a collateral substitute – we should take note of that occurrence and analyze the overall liquidity picture with the fuller context.

Just a month ago, in response to the European Banking Authority’s discussion paper on defining liquidity assets, Deutsche Bank’s Global Head of Compliance pointed out that gold-based liquidity is just as opaque as current indications of repo stress:

“As most gold transactions are over the counter (OTC), data is extremely difficult to access. This should not, however, stand in the way of the EBA conducting a thorough analysis of the liquidity value of gold. The World Gold Council will undoubtedly have a range of sources that it can make available. We would also highlight the efforts of the Bank for International Settlements (BIS), which has tried to compile derivative volumes globally, notably gold. Their studies (conducted triannually) offer detailed daily total amounts of OTC gold spot and swaps contracts etc.”

What all of this shows, from my first post to Deutsche Bank’s comment, is that funding is often a matter of faith but also interconnected through derivative paper. Banks are reliant now more than even on collateral regimes and paper flow for operational funding. While central banks are conducting PR campaigns about fixed currencies and solid liquidity conditions, the facts in the repo markets, while perhaps short of conclusive, highly suggest otherwise. There is more than enough evidence here to piece together a growing funding problem that has ensnared not only repo volumes and lenders, but also gold investors.

The primary concern is collateral, not currency.