The tendency of mainstream economists toward hostility and outright dismissal of gold is directly related to their view of monetary mechanisms that largely took over in the 1970’s. For the most part, gold acts as a very visible measure investment of disapproval of central bank actions intended to foster or create stability. Inflation is only one symptom of instability, so rising gold prices indicate not just possible consumer inflation but potentially broader symptoms of monetary imbalance.

Thus the recent gold price crash was met largely with glee and gloating among the professional economist cohort as evidence of central bank success in not only initiating “normal” financial conditions but refutation of monetary critics. For this view, gold prices in 2013 represent the same as gold prices in 1980. 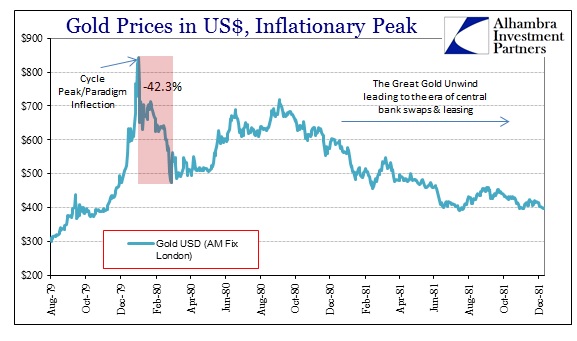 If this view is correct, then we should expect, as economists do, a further crash in gold prices and another Great “Moderation” in the domestic and global economy. However, as I have noted previously, there are numerous other examples of gold price volatility that have failed to result in “moderate” economic conditions and stability in the monetary arena.

Another such occurrence happened starting at the end of 1974 and lasting until the end of August 1976. Over the course of about 20 months, gold prices underwent a nearly 50% correction. 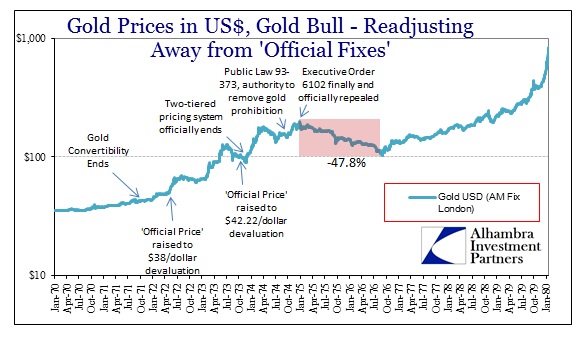 Gold prices had been rising in a two-tiered system since the London Gold Pool collapsed in 1968. The US government continued to honor the $35 official gold price for central bank reserve conversion, but private gold transactions for foreign holders (gold was still illegal for US citizens under Executive Order 6102 from 1933) would feature a floating price. As I wrote here, the monetary instability of that period ended the gold standard and initiated a swap standard in international finance.

By the time Nixon “closed the gold window” in August 1971, the floating price had moved significantly above the official price. On March 31, 1971, the US enacted the Par Value Modification Act that further devalued the dollar to $38 per ounce of gold. On September 21, 1973, under modifications to the Par Value Act contained in Public Law 93-110, the dollar was devalued again to $42.22 per ounce (effective October 18, 1973), the official price that remains in effect today. The two-tiered pricing system terminated November 13 of that year.

Provisions in Public Law 93-373 which was enacted on August 14, 1974, authorized the President to repeal the prohibition of private holding of gold, finally reversing 6102. The repeal became effective December 31, 1974.

Surprisingly, gold prices hit their peak $197.50 (London AM fix) on December 30, 1974, and quickly reversed. While the release of gold prohibition should have been positive for gold prices with the opening of new potential demand, there were additional factors.

As part of the de-emphasis of gold in the official policy, US Treasury Secretary William Simon announced Treasury’s intentions to auction at least 2 million ounces in 1975. The first auction on January 6, 1975, had offered 2 million ounces, but only received demand for 754,000. Not only was there additional supply coming into the market, expected demand had not materialized, keeping gold prices under pressure. 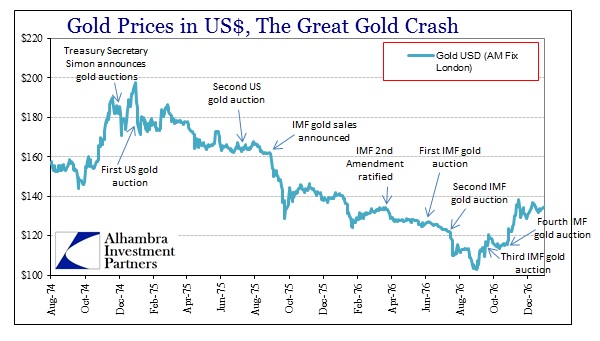 A second auction was conducted June 30, 1975, at a far lower 500,000 ounces. However, at a meeting of the IMF in Venice on August 24, 1975, international policy provided for IMF auctions of that organization’s accumulated gold stocks. The IMF in the mid-1970’s had limited funds for a growing need to bail out troubled countries (rather than a monetary utopia, the swap standard had led to saturated debt and inflation), including pressing problems in the United Kingdom.

Since there would not be enough funding at the IMF to address a potential UK balance of trade/currency crisis and growing emerging market debt issues, it was decided to harmonize global monetary goals among policymakers. In essence, they could kill two birds with one stone – raise currency for a bailout fund for “low income” problem borrowers while further de-emphasizing gold at the same time. The IMF intended to sell one third of its 50 million ounces, but signatory countries had to agree to ratification of the IMF 2nd Amendment (supported further by a February 1, 1976, G-10 agreement) which called for a two year prohibition of official purchases of gold and, more importantly, a permanent cessation of using gold in the international monetary system (including full abolition of the official price of gold).

Gold prices sold heavily after the Venice-IMF gold auctions were announced on August 30, 1975, continuing through the second IMF gold auction on July 14, 1976. Prices finally hit bottom on August 31, 1976, at $103.05. Not only were gold auctions and official actions weighing heavily on gold, inflation had fallen off after the 1974 recession and global stock prices rallied – monetarists were increasingly confident they could operate a global monetary standard without gold.

By 1976, several changes began to reverse that progress. The growing sterling crisis due to trade and fiscal imbalances, as well as ridiculous inflation levels, threatened the British currency and added pressure to the volatile free-floating currency regime that was only a few years in existence. Earlier in 1976, the Bank of England was forced to abandon its efforts to prop up the pound. By March 5, 1976, it had finally fallen below $2, settling in around $1.77 through summer.

In early September 1976, just as gold prices bottomed, running out of options, the government of Prime Minister James Callaghan began the process of negotiating an IMF bailout of Britain. The sterling sunk rapidly, all the way to $1.56 by the end of October.

In addition to the pound’s devaluation, the Federal Reserve in April 1976 had shifted its monetary mechanical focus. The Open Market desk manager was instructed to narrow the band for the effective Fed funds rate while widening the band for the inter-meeting money growth target. The net result was upward pressure on the Fed funds effective rate, forcing the Fed to oversupply reserves (again), accelerating money growth. In April 1976, the average Fed funds rate had been 4.82%, but had risen to as much 5.5% that summer despite no change in the discount rate or monetary stance.

In other words, by the middle of 1976 the fundamental conditions driving demand for gold had changed enough to overcome the effects of official gold auctions. Whereas the first two IMF gold auctions in 1976 had driven gold prices notably lower, gold prices after the intensification of the sterling devaluation rose despite the additional IMF auctions conducted at equal amounts (about 780,000 ounces at each).

In fact, from that point forward gold prices went on an incredible run as the US dollar followed the pound into dramatic crisis – nothing short of an almost four-year currency run leading to desperate internal inflation and ultimately debilitating economic dysfunction. The US Treasury renewed auctions of its gold stock in April 1978, but the combined effects of selling with the IMF (it kept selling gold until 1980) did absolutely nothing to derail the dollar’s devaluation (gold’s rise).

What we can learn from the Great Crash of 1975-76 is that exogenous factors (politics, monetary policies, liquidity conditions) can have an outsized influence in gold prices regardless of fundamental conditions. Far more than for any other commodity, the history of gold as money makes it a target for non-investment policies and considerations. Despite this determination and these intentions that run hostile to gold, however, ultimately fundamental monetary properties of the global system will determine the relative “values” of everything from fiat currencies to real money (gold) over the longer term.

Investors of any financial asset really need to be well aware of all these factors, not just investors in gold. If I am correct, contrary to the crowing economists, that one of these exogenous factor (liquidity) is largely behind the recent gold price crash, given the continued and uninterrupted fundamental condition of debasement everywhere, economists likely have jumped to an improper conclusion. That’s exactly what happened in 1975-76 as similar ill-timed monetary hubris pushed the global economic system into even further imbalance leading directly to widespread economic dysfunction and disaster.

It is dangerous to write off the gold bull, and monetary critics, without much better confirmation that the global system can tolerate unprecedented and unending monetary interventions.  In the 1970’s, economists rewrote the global monetary order and chaos resulted.  But at least they had their gold crash for a temporary reprieve.