Clearly the Federal Reserve has taken seriously the consequences of QE and its relation to asset prices in so many markets. That itself represents a leap forward as perhaps the central planners in the Marriner Eccles building in Washington, DC, are beginning to understand that markets are not classroom exercises. In this bizarro world of unintended consequences, stocks actually are selling hard on less QE – if this was due to “normalization”, then why wouldn’t stocks be rising to celebrate the apparent end stages of the emergency?

Gratuitous rhetorical questions aside, the dramatic slide in bond prices actually confirms the over-connected nature of monetary policy. While the end of previous QE episodes were met with bond buying in almost perfect synchronicity, the suggestion of an end to QE 3 or 4 has seen the opposite. 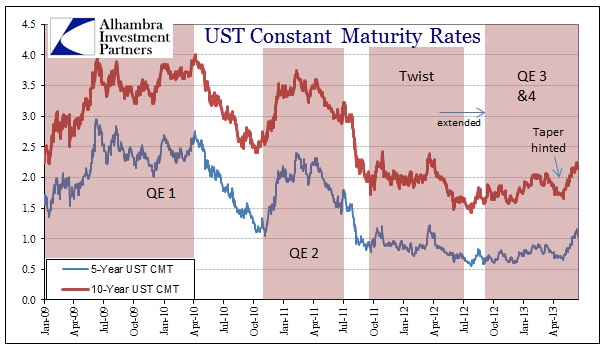 That has been given significance in the context of this renewed dovish optimism that the economy is healing, or has healed, and that emergency measures will not be needed before much longer (the opposite of what stock prices have shown these past two days). This interpretation sees the volatility in bond markets as the expression of bond investors getting used to the idea that inflation, the “good” kind the FOMC has been trying to engineer since 2008, is on its way. The better the economy looks, the higher yields will have to adjust as a robust economy increases the demand for “money”.

But as stocks are telling it, that isn’t quite what the fuller credit markets are saying. In terms of yield, a healthy dose of skepticism is required when trying to divine economic significance from wholly manipulated markets. As I have written in so many previous posts, yields may be reflecting more than economics, reacting to liquidity and collateral concerns first.

To take out some of this uncertainty, we can analyze credit price and yield movements in the context of inflation breakevens, where there is less manipulation due to the more fundamental relation between TIPS investors and pure UST. That is not to say this is a perfectly clean indication, QE purchases TIPS as well, but it is distilled more readily into an economic concept rather than pure monetary finance. 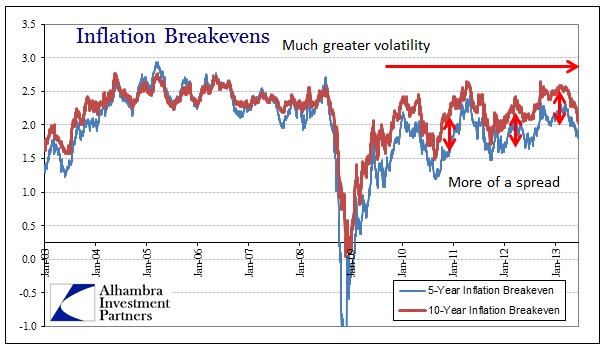 In the context of inflation breakevens, the now-familiar pattern re-emerges quite clearly. 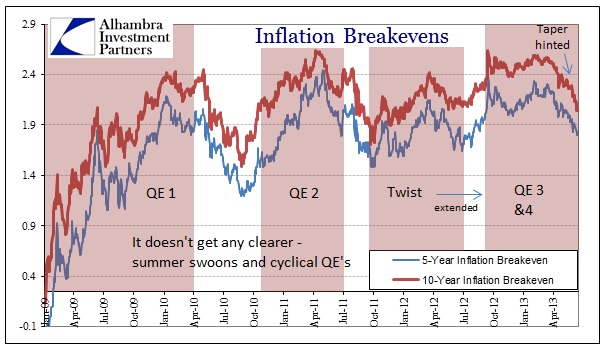 Inflation expectations all along the yield curve had been falling long before the word taper scared the hell out of credit markets. In other words, the summer swoon is once-again appearing in concert with declining economic fortunes (seasonal adjustments and all). This is wholly contradictory to the view that credit markets are preparing for “normalcy” including economy-driven inflation.

While nominal treasuries are being sold, TIPS are being sold just that much harder. In that daylight between the two we see both the larger trend against bonds in general and the same pattern of declining inflation expectations that seem to accompany the perceived and real terminations of the various QE’s.

From all this I would argue that the overall credit market selloff, which is dramatic in high yield corporate as well, is due to volatility and liquidity rather than inflation; in other words taper rather than normalcy. Inside that selloff is diminishing views on organic inflation/recovery, once again, for the fourth time in as many years. If there is a reason the Fed continues on with emergency “liquidity” measures four years into the “recovery”, this is it, taper or not. It’s the old monetary illusion distilled.

Bond investors simply don’t want to get caught with too much artificially supported inventory – after all the dramatic decline in nominal yields last year was certainly banks and speculators buying into expectations of QE. If they miscalculated at all, and it seems taper has caught them offguard in more than one market, you would expect them to lighten up to whatever level the Fed now expects to buy over the life of the latest program. As this adjustment plays out in a volatile pattern, it gets amplified by collateral concerns and margin calls (again, in more than one market). But, as breakevens show, it has little to do with inflation or expectations of a real recovery and everything to do with frontrunning QE and the FOMC; whichever direction the bouncing monetary ball takes at any given time.