Gold sank lower in coincidence with the reappearance of Chinese liquidity issues. Much like the Fed, the PBOC has both denied it would inject liquidity into the interbank markets while at the same time contradicting itself. The latest from PBOC governor Zhou Xiaochuan was centered on the ephemeral concept of “stability”:

“The central bank will make comprehensive use of policy tools and administrative measures to adjust liquidity to ensure overall market stability.”

That was not quite enough to calm interbank markets, where short-term liquidity premiums had grown exceedingly large. The SHIBOR curve itself remains highly stressed, but has come down from the 13.4%+ rates seen only a few weeks back on June 20. The Shanghai stock market (not a real market, but at least some indication) ended a dramatic two-week slide as “investors” in at least some asset classes appeared to be less risk-averse.

There is a direct spillover effect as liquidity in China ties in with both the renminbi/dollar peg and thus the merchandise trade balance. In other words, liquidity issues are due in no small part to the export market for China. 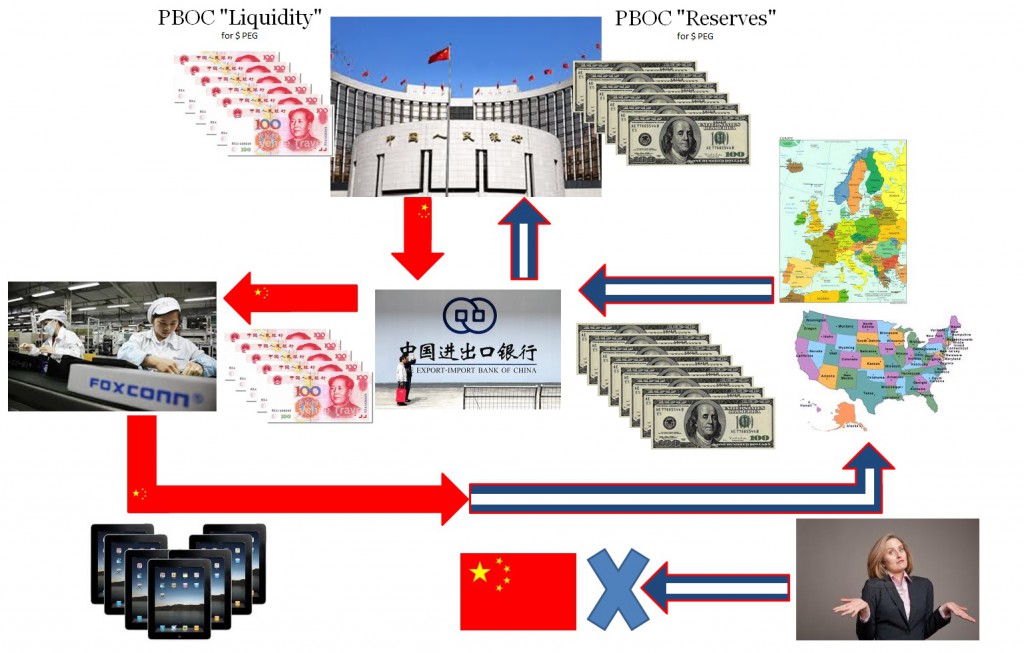 At the center of the trade regime sits the yuan/dollar peg, placing the PBOC in the middle performing a liquidity/reserve transformation. Thus there is a direct relationship between PBOC dollar “reserves” and the liquidity pumped out into the banking system. While this leads to a unilateral trade relationship, that becomes a durable merchandise and current account deficit on the US end, it can also be problematic inside China. For the most part, Chinese businesses exposed to global trade have been neutral to currency positions, allowing the PBOC to perform this marginal dollar function.

That has meant the PBOC has to manage flows from that merchandise deficit as well as financial flows into the country (“hot money”) and match them going out (asset purchases of US securities). But it is merchandise trade that sets the terms and scale of what the PBOC will eventually do inside the Chinese banking system (at the margins).

In a situation where trade has tailed off, the PBOC has to be extremely careful not to push liquidity too far above the reserve position, not only in terms of inflationary potential, but also in consideration of losing control of the dollar peg. The last circumstance Chinese monetary officials want to get involved in is defending the peg through reserve mobilization. 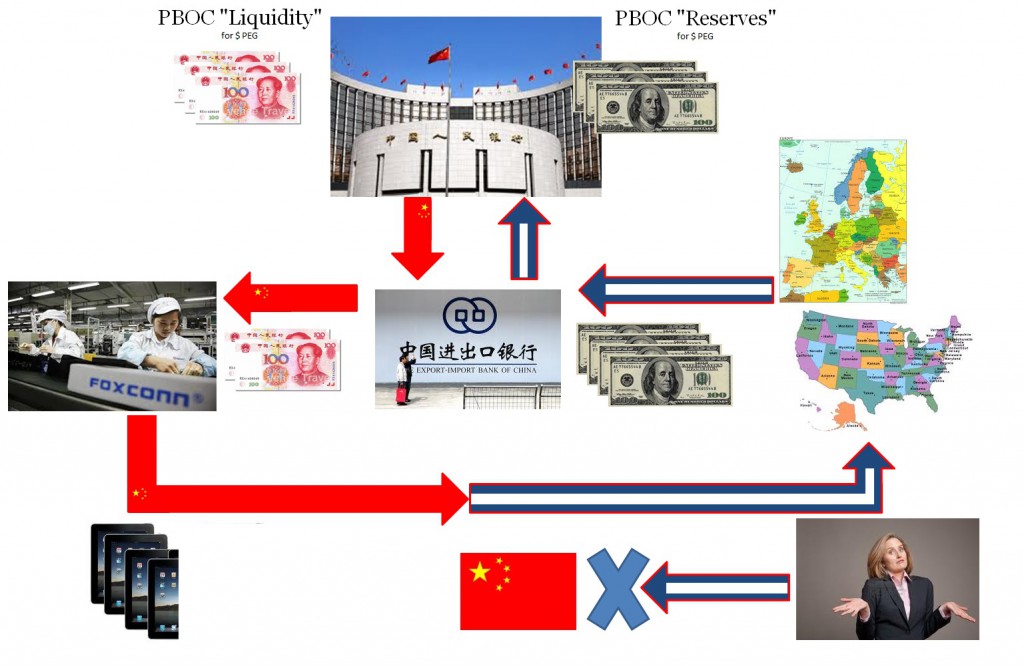 But there are a few complications here that need to be examined. First, the Chinese corporate sector has been, contrary to all assumptions, accumulating a net short US dollar position over the past few years. That points to both fudging in Chinese trade numbers and an economic position that is not at all what was believed. If Chinese corporations have been receiving dollars in the export market but “selling” (paying) more to finance imports (remember global trade is still conducted largely in US dollars), then the current account position in dollar terms is wholly different.

That makes the trade system shown above outdated, and, in fact, there is much speculation that is the case. That would also mean that slowing export trade would imperil the short dollar position even further since there are fewer dollars coming into the Chinese corporate sector. 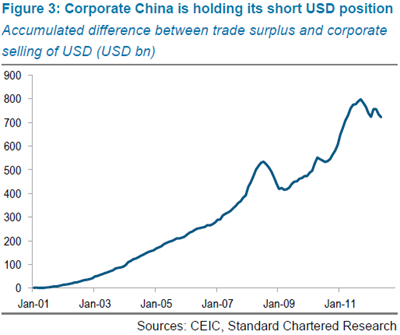 The timing here is also suspicious in that China changed the banking rules back in April 2012 to allow banks (smaller banks at first) to hold short US dollar positions on their books. The ban was previously instituted as a measure against yuan appreciation, but in light of the corporate short position it may just as well have been an attempt to pass the short position over to the banking system where it could be better managed and funded at the PBOC.

That is likely why there have been rumors and stories of various copper-based financing arrangements falling apart. Commodity-based collateral against US dollar loans would be further uneconomical as the dollar short progresses in both size and system (toward banks) as well as the apparent turn in regulation against the practice. But if the commodity-based lending arrangements were more than just speculative positions, instead were related to this dollar short (in other words, commodities acting as collateral to finance the growing dollar short) in the corporate/banking sector it would put tremendous dollar liquidity pressure on Chinese firms.

Absent direct PBOC measures, might these firms/banks appeal to dollar arrangements in other mediums, such as gold? This is a tremendously esoteric and convoluted arrangement and thus analysis, but that is the modern system as it tends to operate in the presence of largely arbitrary regulation across multiple national systems.

Again, as with everything relating to gold as financing collateral, the timing is extremely suspicious. The latest waterfall in gold prices occurred on June 20 – the very day SHIBOR hit 13.4%. Further, China’s SAFE rules regarding commodity financing were announced on May 5 for implementation in June. The high in gold prices after the early April collapse just happened to be the Friday before China’s regulatory announcement. 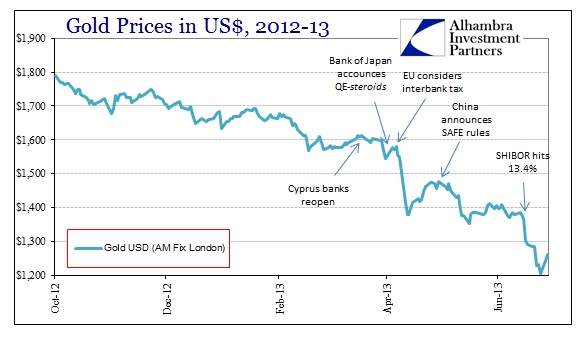 The problem with so many moving parts in the dark recesses of interbank multi-national markets is there are no straightforward interpretations. All the information and evidence we can gather is circumstantial left over from the fingerprints of all these disparate processes, but that does not make it any less compelling. The bottom line is that there has been an elephant in the gold market, making it impossible for gold prices to breathe. There are no shortages of central bank-related candidates that all end up pointing in the same direction – dollar liquidity in a world where Triffin’s paradox has been stood on its ear.

Summing up the China-gold connection:

• Chinese corporates have gone from net sellers of US dollars (to the PBOC to maintain the peg as shown in the first diagrams above) to net short the US dollar as the trade system did not re-emerge in pre-2008 fashion.
• The corporate dollar short contributed to a system of commodity-as-collateral to finance the dollar short.
• Concerns over the dollar peg led Chinese officials to both remove restrictions on the banking system being short US dollars and to crack down on commodity-as-collateral (to combat these post-2009 current account issues).
• Corporates/banks in China have been short liquidity in the weeks since, not just in local currency but likely spilling over into the global dollar markets.
• Possible appeal to gold-as-collateral to maintain dollar liquidity; thus depressing gold prices further.

In the chain of events globally since late last year, it seems as if there have been notable liquidity shocks in close proximity. That shatters the illusion that central banks have successfully suppressed tail risks, such that they exist as such, and have therefore achieved “normalcy”. The Fed can talk taper all it wants, but conditions are not on a solidified path to full recovery at all. Given what we can parse out of these various markets and actions, it seems far more likely that dollar liquidity is the culprit in gold markets than an investor-led flight to expectations for normal conditions and operations.

Again, it’s not inflation risk that drives the appeal of gold, it is central bank risk – as in central banks destroying stability in their currencies and markets.  That risk has clearly not abated, tail or not.