Chairman Bernanke stole the show yesterday, certainly by his accommodative and now contradictory stand. I suppose that is the danger in trying to talk “markets” toward “targets”, much like Greenspan in the late 1990’s. Toward that end, he made at least one prediction that will likely come true (in sharp contrast to the Fed’s history), namely that the unemployment rate understates the weakness in the jobs market.

This was actually my main thesis in analyzing last month’s celebrated jobs report, particularly noting the very stark contrast between the Establishment Survey and the Household Survey (shown again below). 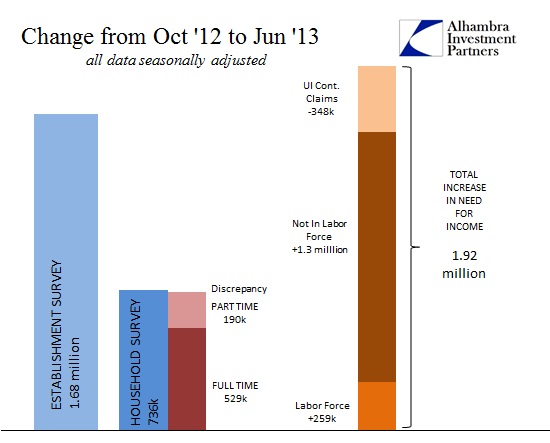 Not only do we have 1.3 million uncounted potential workers, there is a nearly 1 million jobs difference between the two surveys. This view of jobs, like Bernanke’s suggestion, might explain why we are track for three straight quarters of sub-2% GDP growth.

That provides a basis to expect downward revisions, including those GDP estimates, once trend-cycle analysis flips trends (perhaps waiting for the NBER to perform their statistical alchemy), not likely sparing the pickup seen in the Establishment Survey.

For 2007 and 2008, the BLS has significantly revised the Establishment Survey estimates to conform to the now-accepted trend-cycle view. There were far weaker employment conditions toward the end of 2007 that initially appeared consistent with a stable job market. In fact, it was the beginning stages of a severe contraction that simply was not captured due to the wrong trend benchmark. 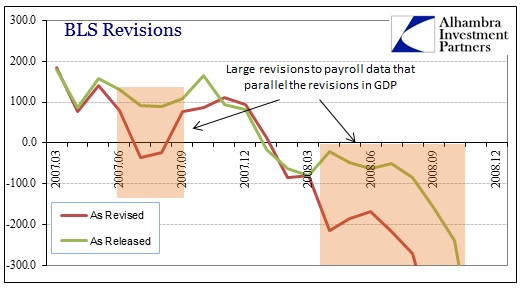 Had these new revisions been in place concurrently, it would have produced a far different picture of what was transpiring in the employment space.

I bring this up because there is another survey for the employment market. The JOLTS report looks at labor from a slightly different perspective, giving us an almost independent check on the other BLS surveys. In the context of this “dispute” between the Establishment and Household surveys, JOLTS therefore may tip the weight of evidence toward one or the other. 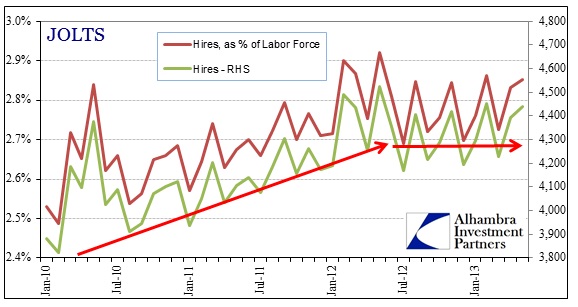 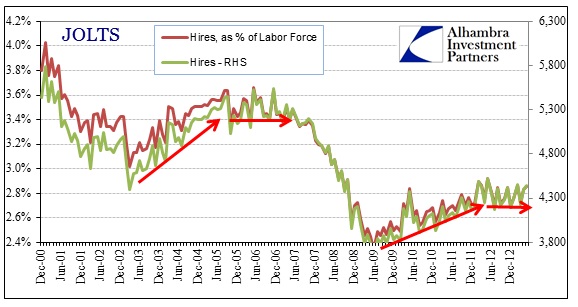 Not only is the structural employment problem evident here, but also the suggestion that downward revisions may be coming in the Establishment Survey. In this view, if the JOLTS Survey is even a decent measure of acceleration in employment activity, it looks as if the hiring activity in JOLTS conforms to the view provided by the Household Survey, not the celebrated Establishment estimates.

Undoubtedly, mainstream economists will object since the Household Survey is far more volatile in its month-to-month measurements; indeed that is the case. But, given trend-cycle analysis and the huge revisions, the Household Survey actually performed much better in the runup to, and first stages of, the Great Recession in relation to current revised estimates. Using the Household Survey instead of the Establishment Survey would have at least provided an inkling of what was about to hit. 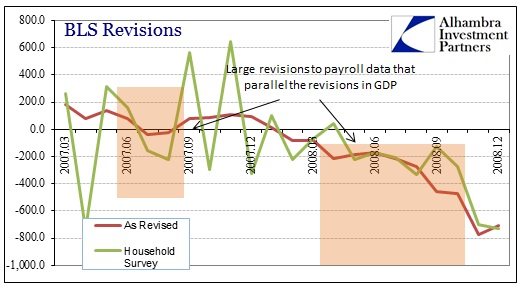 I think, in light of trend-cycle analysis applied to mainstream economic accounts, it is wrong to so easily discount these alternative measures and perspectives. While Bernanke may not have had this exact process in mind when he spoke yesterday, the combination of weakness in the Household Survey and JOLTS hiring activity plus the labor force participation problem coupled to the lack of quality job additions added to the unemployment insurance cliff produces the same result.

As to the potential for tapering, that has always been about the rock and the hard place; the rock being asset bubbles in housing, credit and, yes, stocks vs. the hard place of lackluster, at best, economic performance. Given the problems of real time economic tracking and the dubious record of ferbus and other econometric models in use it would make sense that the FOMC appears to subscribe to each and every possible outcome concurrently. The committee both backs the accommodative approach (employment might be weaker than indicated) and the taper approach (things are getting much better) all at the same time.

Welcome to deeper central planning, where asset prices gleefully celebrate how much weaker the economy might actually be once statistical machinations are laid bare and stripped free of pseudo-precision.