The bond market rout appears to have settled as various Fed speeches have walked back the idea of tapering QE. The damage has been done in many places, however, regardless of whether QE stays at full throttle $85 billion or drops just slightly to $70 or $65 billion a few months hence. The hardest hit seems to have landed in the mortgage refi market.

Mortgage rates have moved relentlessly upward off historic lows, coinciding exactly with the first mention of QE taper. As a direct result, mortgage applications have collapsed.

It’s interesting to note that purchase applications are still above last year’s level, perhaps indicating that prices are more enticing than interest rates. That would certainly conform to the theory that atypical price movements (bubble) are at the heart of this taper nonsense to begin with. In any case, since refis are the vast majority of new mortgages in this structurally deficient system, the collapse there is another instance of the infamous “broken transmission mechanism” of monetary policy; this time self-inflicted in the spirit of 1937. 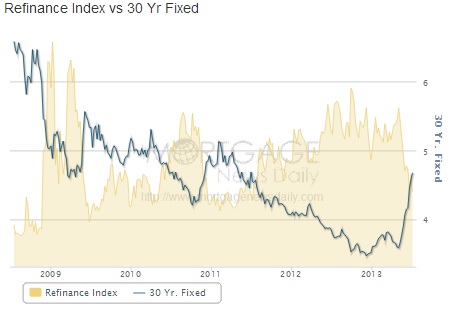 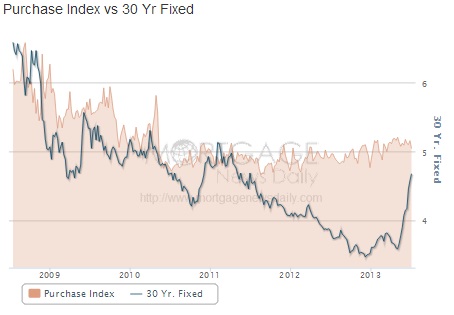 Since mortgages for purchasing real estate have not really followed along with refis, it is very interesting that home construction activity is behaving like refis. As the Purchase Index above shows, mortgage application activity for the purchase of homes and real estate really has never recovered from the housing bust. There is a noticeable upward trend, but nothing that would link to both prices and construction activity up or down. 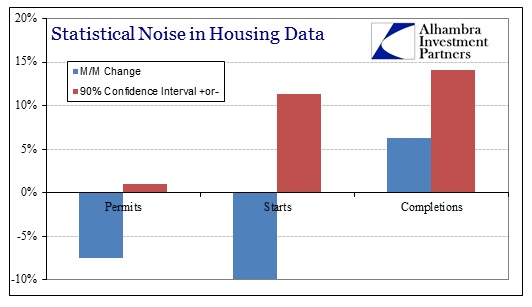 The month of June was a huge setback for home construction, as estimated by the Census Bureau. This comes with the usual caveats about the volatility in the data series, and the difficulty discerning statistical “noise” from any durable or emerging trend or inflection. However, as is usually the case in economic indications (and finance markets for that matter), volatility is usually associated with trend changes and inflections.

We have noted volatility in housing data for some time now, but given the past few months it does appear as if the housing market is at least in a pause, if not somewhat cooling or reversing. 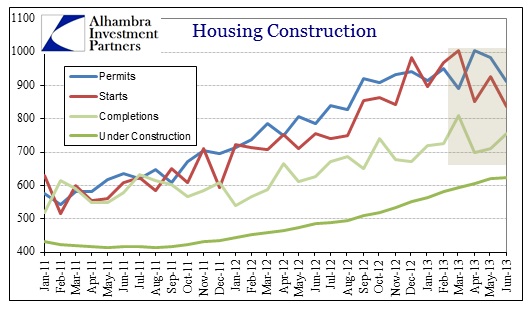 In this case, given the preponderance of “investment” activity in certain re-ignited “hot” markets, prices may be undercutting the profit margins of flipping and REO-to-rent. The rapid decline in multi-family activity is evidence (volatility caveats applied) to that. 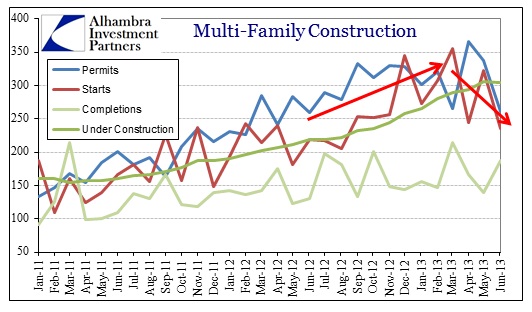 No matter how you analyze the construction activity data, it does appear as if an inflection has been reached; coinciding with QE 3’s activity in the MBS marketplace. 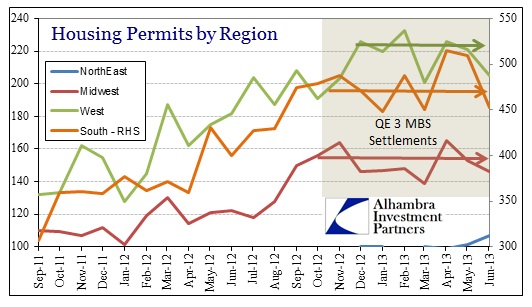 Further, there still exists this huge and growing disconnect between completions and permits/starts. I have yet to see a plausible explanation for this, in particular why it would last so long and grow still larger; leading to greater suspicion about the veracity and quality of the statistical data. 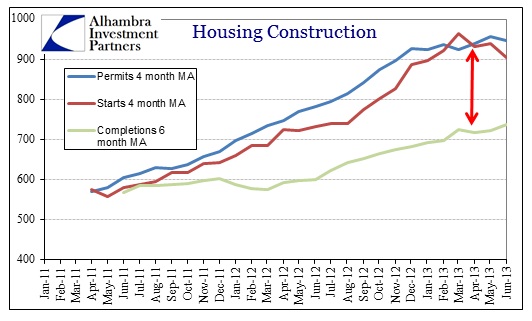 Regardless of the various “scientific” facets of data gathering, what we do have are indications of a changing housing market. In total, refi applications tanking so much will certainly depress QE’s expected monetary efficacy since refinancings are (were?) the primary transmission of monetary policy into the real economy. Next to that, the pricing distortions created by last summer seem to have cooled demand for new construction.

My theory here conforms to everything that is wrong with central planning in the Federal Reserve’s regime. I believe that credit “market” participants, think PIMCO and Bill Gross’ Total Return Fund allocation, bid for MBS and new mortgage financings in anticipation of QE 3. All through 2012, and as early as late 2011, as rumors swirled that Bernanke would be back into balance sheet expansion in something other than UST, these larger credit market whales simply front-ran the Fed (all the while likely lobbying them to do it).

The flood of anticipatory credit moved housing, especially multi-family, into a mini-bubble phase (in comparison to the previous episode). Once QE 3 was actually activated, the flood seems to have paused or stopped growing. There is no clear explanation as to why, but it seems like a combination of bad MBS liquidity (repo collateral and the collateral silo of QE) that formed a financing barrier against the pricing anomaly increasingly affecting “investment” profit expectations.

That brings in the last aspect of QE; namely the inability of monetary policy to foster anything other than this idea of a “muddle”. As I mentioned a few days ago, if current GDP estimations are close, we will have seen five of the past six quarters at 2% or below (in some quarters much below). Without monetary policy opening a clear channel into real economy activity (not stock prices, there does not exist a “wealth effect” without widespread debt accumulation), household incomes cannot support rising rental rates that would mirror real estate prices.

In other words, since QE does not really work, the mini-housing bubble created in anticipation of it was limited by its own effects! I think there is a good circumstantial case to be made for this theory, but the data and the convoluted nature of credit flow in today’s central planning makes hard conclusions difficult. Admittedly, there is ambiguity here that needs further study and time.

On the topic of macro and tapering, if this interpretation is even partially correct then it adds yet more data to the idea that the economy is moving in the “wrong” direction. Given that housing was a good portion of what little GDP growth we have seen since this QE-anticipation cycle began, its potential reversal makes expectations for a robust H2 rebound all the more unrealistic.

Taper is a game of trying to take the edge off “market” distortions, and in so doing only further distorts “markets”.