Everything Has Happened Before, Con’t

Everything Has Happened Before, Con’t

I have plotted a chart of the S&P 500 (taken from the research of Robert Shiller) for a particular period in time. It shows the sometimes tenuous relationship between stock prices and underlying earnings. 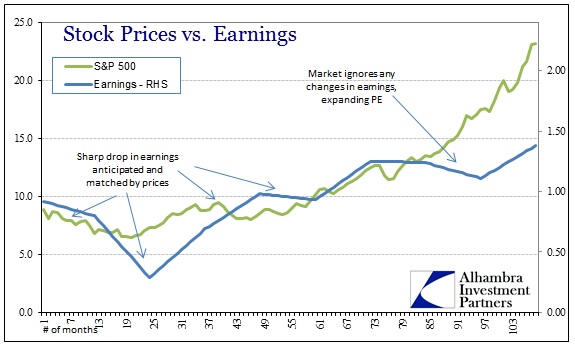 Prices and earnings largely behave as you would expect in the first half of the chart above – prices anticipating changes in the earnings environment (economy) and reacting directly. The third episode of earnings declines (recession), however, is ignored by stock prices altogether. 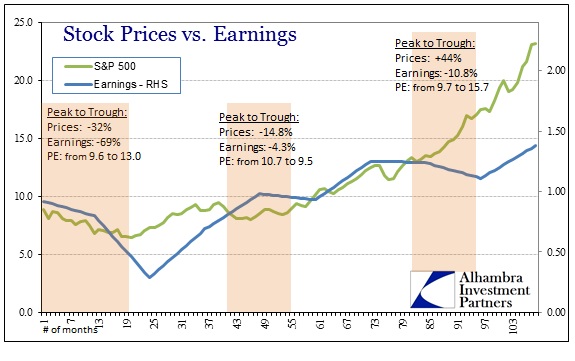 The first recession was obviously much more severe, and thus prices reacted severely, though limited on the downside by “reasonable” valuations at the outset. The middle recession was much more muted in the reaction of prices and even the effect on earnings (very mild recession). The last was another relatively mild recession, but prices wholly diverged.

The time period shown here is the decade of the 1920’s. Using PE’s as a relative measure, there is a clear change in relationship or valuations around 1926. 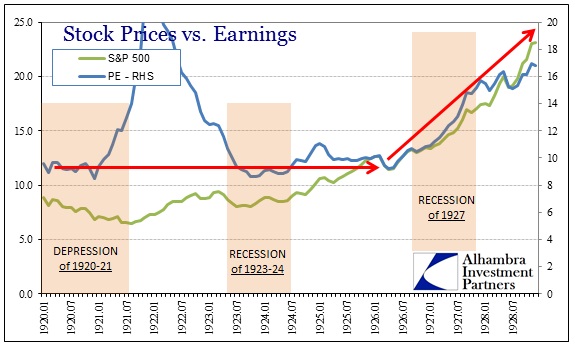 What had been largely stable valuations even through the hefty depression of 1920-21 became a price progression fully divorced from any fundamental anchor. We know full well, to almost every last little detail, what happened shortly thereafter. 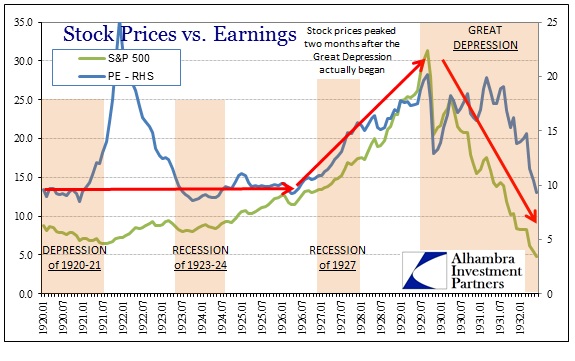 The amount of scholarship and academic interest in the decade of the 1930’s is somewhat understandable given its place in both popular imagination and deeply embedded economic fears of such desperate insecurity. However, there is very little interest and scholarship of the 1920’s, which is entirely curious (unless accounting for ideology) given that it seems far more intellectually healthy to investigate not just symptoms but causes.

In monetary terms, the genesis of this conspicuous lack of devoted interest, the 1920’s were roaring for a great many evolutions in all manner of financial mechanisms and theories. Not the least of which was a brand new “progressive” age of central bank experimentation.

There was no lacking for drama in the 1920’s, featuring currency collapse in not only Weimar Germany but nearly so only a few years later in France, as the incomplete understanding of economic and monetary processes led inevitably to financial and economic conflagration. Conventional thought in the layman’s sense of the age is focused directly on October 1929, and in many ways rightfully so. It was this disconnect between market and fundamentals that made it so captivating, and thus so devastating.

What is left out of that narrative is exactly what is most important, and therefore most relevant in terms of historical context and comparisons. There was no single cause of the stock bubble, but not all contributing factors were uniformly distortive either – some distortions played a larger role in the bubble and then bust. But where modern scholarship devotes all energy to that bust, there was a direct link between all the monetary evolutions of the age and the stock bubble; call money and interbank markets.

There is no doubt that there existed real growth and tremendous real economy innovations in those years, but they alone cannot explain such asset pricing divergence (inflation?), and beyond that there is more than coincidence in the timing. Instead, the Federal Reserve working with the Bank of England (the pound to prewar parity) to “manage” economic affairs through exchange mechanisms led to huge marginal flows of gold (real money), which were, contrary to almost all historical experience, intentionally “sterilized”. By not allowing market mechanisms (the “rules of the game”) to clear imbalances, these monetary mismatches simply grew massive.

A few months ago, I wrote about the effects of call money and the new interbank market, summing up this angle of causation:

“By the mid-1920’s, when federal funds became far more accessible, margin arrangements had risen to 90% of security purchases. Customers needed only 10% ‘equity’ to finance security speculation, and the lending requirements and standards for meeting this 10% threshold were greatly reduced.

“Call money rates throughout the 1920’s exceeded, meaning a durable positive spread, to both the discount rate and the quoted federal funds rate. That meant the Federal Reserve System was directly subsidizing the call money market, and therefore stock margin buying, due to an imprecise and overly ‘stimulative’ discount rate. The undesirability of the discount rate owed to the preference for ‘sterilizing’ gold flows in the ‘gold exchange’ period of the 1920’s – the Fed was no longer allowing gold to initiate price changes to alleviate monetary imbalances. Instead, credit would pile up so that imbalances would be semi-permanent.

Margin buying of stocks and Federal Reserve policy – a match made in history. This is not to say that the scales are equalized or the scope is or will be exactly as before, only that we have seen these exact processes play out time and again. The results, despite being variant in scale, are certainly uniform in manner of unwind.