It’s The Fed’s World, Bonds Are Just Living In It

It’s The Fed’s World, Bonds Are Just Living In It

The JC Penney bond curve finally got the message this week that the company is in serious jeopardy, teetering close to collapse. The stock has been trending lower since February 2012, having lost some 70% from that peak (an amazing feat considering the sheer amount of asset inflation since then). The bond market, usually where trouble is first detected, has been mostly complacent.

The 2037 bond from JC Penney that I noted only a few weeks ago has finally sold below 70. Bond investors in the shorter maturities that had believed the Goldman Sachs loan (and the company’s seemingly favorable refunding schedule) bought the company several years are now significantly underwater. Bonds that were trading near or slightly above par are now down to 90 or below.

In an age where high yield debt fetches only 6%, we finally have some bonds back in double digit yields. The risk/reward is still very much asymmetric at even that yield, as it would take a lot for the company to survive another 24 years; it’s about as close to a leap of faith as there exists.

For the most part, bond defaults have become a bit of a rarity. Moody’s does expect an increase in high yield defaults, ticking up to 3.2% by November from 2.9% currently. By historical standards, that is still incredibly low and only adds to the complacency in the bond market.

So we have to decide whether low defaults are indicative of anything other than rate suppression and the collateral effects of such intervention. By engaging in ZIRP and QE, interest rates in every part of the market have been artificially reduced in order to incentivize (again) risk-taking to the point that the chase for yield extends to risky places it normally would not. That includes junk bonds, as historically low yields denote. That means that there is much more available liquidity in high-risk junk than would otherwise exist, keeping companies afloat where they might fail absent the yield stretching.

That is what the JC Penney bonds seemed to indicate before being jolted back to reality this week. There is more than a bit of self-reinforcing circular logic at work here, in that the chase for yield brings in new money that reduces default levels, and thus the decline in default rates are used to justify the lower yields.

The pricing structure in the JC Penney curve has been very telling in that regard. While the company gained a refunding reprieve, it only extended out to 2015 (the next time the company will have to rollover debt). You would expect, given the funding problems here, that bond prices would reflect a measure of confidence out to 2015 and then tail thereafter, reflecting refunding needs on liquidity risks. But they were complacent out to 2017 (on July 31, bonds due Apr 2017 were trading at 98.12 while bonds due Feb 2018 were trading at 89), reflecting something else.

If we look at the eurodollar futures curve from early May, the massive futures market for wholesale money was expecting a relatively smooth transition out of QE and ZIRP. 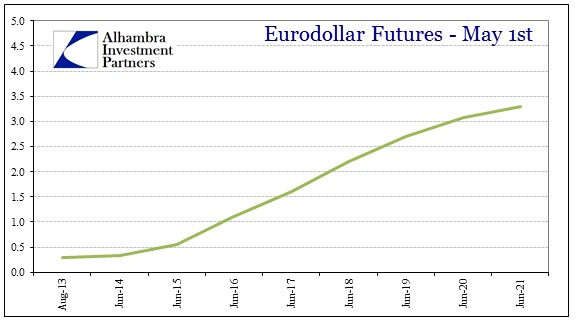 The middle of 2017 is somewhere still in the transition phase between “emergency” monetary measures and “normalcy”, thus still largely within the Fed’s “liquidity” umbrella. By June 2018, we are far closer to “normalcy” than ZIRP.

The taper talk of May completely disturbed the bond and money complex. The bond markets no longer forecast such a smooth transition between liquidity from the Fed (or at least perceptions of liquidity) and a return to naked market forces. 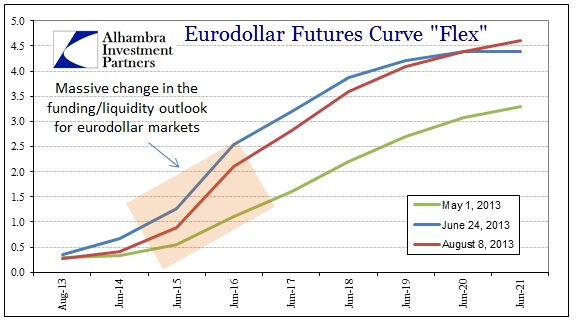 Given fears over Fed policy and that promises of unending liquidity and ZIRP may be undone by non-calendar factors (such as the unreliable unemployment rate and Establishment Survey), the funding markets absorbed huge amounts of volatility. Unlike the selloff in UST, the futures curve here is a funding curve for dollar-based “investment” all over the world – the epicenter of dollar carry.
These funding/liquidity perceptions were transmitted not just inside the dollar credit markets, like US treasuries, but extended wherever dollar carry trading went – including China and emerging markets. I don’t think it is too much of a leap to suggest that Chinese liquidity problems are in part due to this re-adjustment in eurodollars (including collateral needs, as a lot of leveraged trades were hit with collateral and margin calls due to this funding volatility).

Inside the US markets, this liquidity dump shows up under inflation expectations. 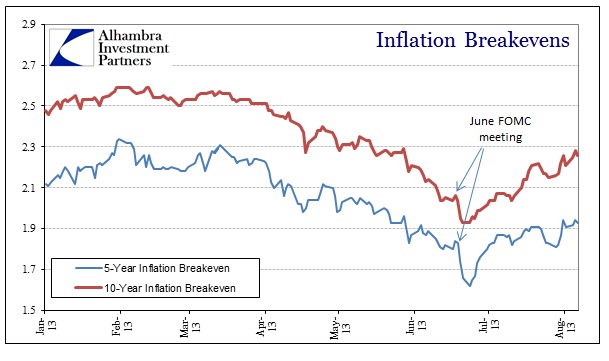 The liquidity markets hit their lowest point on June 24, the week just after the FOMC meeting and Bernanke press conference seemed to confirm tapering was a foregone conclusion, as well as potentially close at hand. Because of the developments in the eurodollar funding markets, I believe that was the reason for the plethora of Fed speeches and statements “assuring” markets that even if taper was coming it would not undo “emergency” measures. It was a message to the funding markets that the Fed was still there and would continue to be there regardless of taper.

The strain of liquidity was such that it extended into default perceptions as well. Circling back to the junk bond market, credit protection was bid exactly coincident to liquidity conditions indicated above, including a spike in protection buying into June 24. 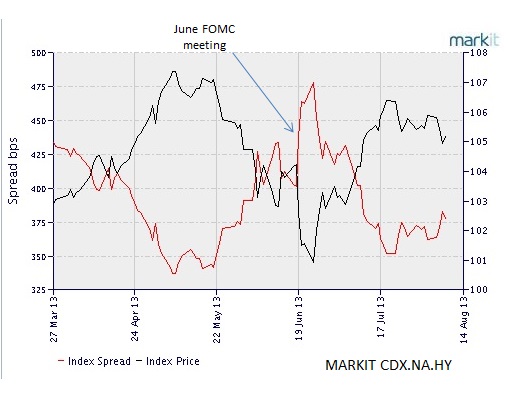 That pretty much confirms what we have seen in JC Penney bond prices, namely that as long as the bond markets are confident the Fed will be intervening there is little default or liquidity risk. Absent the Fed, the market outlook is entirely different, with implications far beyond simple nominal interest rates.

The interpretation here is obvious; that markets are driven by policy not fundamentals. What we see in inflation breakevens, for example, is not inflation expectations at all but policy expectations. Across the board, the world is a much scarier place absent QE and ZIRP. Extending that view further, asset prices look much different as well.

If these titanic shifts are related to not just taper talk, but to the FOMC meetings earlier in the year that expressed less confidence and even some doubts about QE 3&4, it would explain a lot of the liquidity and even collateral problems since March. It appears as if a lot of leverage has been piled onto FOMC dedication, and we have gotten only a flavor of it in the months since.

One last note, perhaps the most important point. The eurodollar curve has come back only slightly from its June 24 blowout, meaning the funding markets have not been talked back much at all. While interest rates have settled somewhat, liquidity remains stressed and volatility has not abated. For the Fed to have been truly successful, it needed markets to build financial strength and investment based on the economy. That would have made unwinding QE less systemic. Instead, what we see is rebuilt risk-taking and leverage based on policy. In that respect, it’s not any different than 2007.