Taper Narrative Completely Destroyed By The Fed’s Own Tools

Taper Narrative Completely Destroyed By The Fed’s Own Tools

Monetary policy is rendered by the FOMC in Washington, but the operational end is conducted by the Open Market Desk at the Federal Reserve Branch in New York (FRBNY). The “desk” won’t conduct policy operations with just any counterparty, however. The Fed “carefully” screens potential banks for several characteristics that make them worthy of doing business. These chosen few are the Primary Dealers; banks that are the lynchpin or keystone of transmitting monetary intentions into the wider dollar market, providing the seamless (it is hoped) flow from federal funds to eurodollars. Global dollar conditions rest on the ability or willingness of the PD’s to add liquidity.

Every month the Fed conducts a survey with the PD’s to determine “market” expectations for economic variables, liquidity factors and how policy might relate to all of them. It’s an information gathering process that supposedly helps determine “appropriate” monetary policy with the least disruption and highest possible degree of orderly function.

The June survey, conducted on June 10 during the height of the bond selloff, destroys the “taper” narrative completely. Policymakers are trying to push the image of a strengthening economy justifying scaling back either QE 3 (MBS) or QE 4 (UST), or both. Part of that has been connecting bond action with inflation expectations – rising yields are indicative of rising inflation expectations, and thus successful policy transformation.

Question 5 of the survey, however, demonstrates conclusively that the PD’s (and therefore, we assume, the funding “markets”) are not buying that explanation in the slightest. 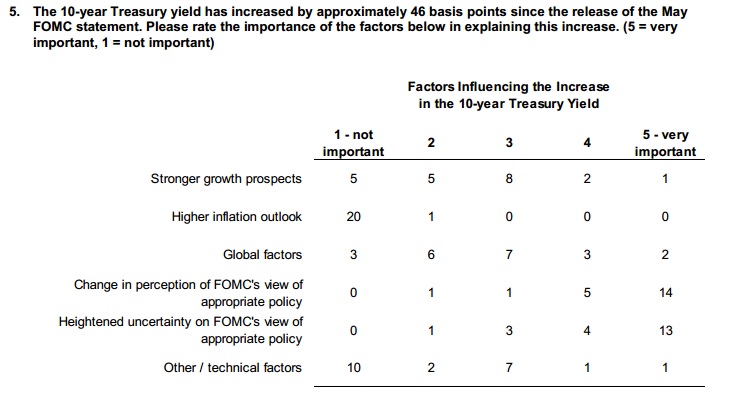 Only three participants see “stronger growth prospects” as “important” or “very important” as it relates to the bond selloff. Nobody thinks higher inflation is at all a factor (a point that cannot be overstated).

On the contrary, nearly every respondent believes the FOMC’s actions are causing the selloff.

Digging further into the inflation stance, question 12 asks for changes in economic outlook, including inflation expectations.

After noting that several dealers have reduced inflation expectations (and none raised them), the next sentence displayed a curious and contradictory anecdote that has been replayed at other times but largely ignored. Several of the banks charged with carrying forth monetary directives have become “concerned with the recent deceleration in inflation.”

Only a few weeks after this survey was conducted, James Bullard (St. Louis Fed) dissented from the June FOMC policy directive, echoing exactly this concern – that the Fed needed to be careful to defend its inflation target from below as well as above.

Lowered inflation outlooks, including growing concerns over the potential for falling into “deflation”, is evidence, in the orthodox textbook, for doing the opposite of taper. Whether these inflation expectations are being derived from the inflection lower in inflation breakevens since March is not clear. I have little doubt the disproportionate selloff in TIPS played at least a part of these interpretations.

In any case, the cumulative evidence here is that policy is creating the selloff and that the cover story being fed by the Fed is not believable inside the marketplace. The PD’s are saying the liquidity market is expecting neither a pickup in the “recovery” nor any attendant inflationary pressures. QE as a policy is designed for exactly that purpose, to stimulate real growth through inflationary expectations. The PD’s are actually arguing for failure on both counts.

Given this data, the FOMC should be positioning for increasing the QE pace. The monetary textbook, from which policy does not ever diverge, preaches exactly that: low inflation + concerns of too low inflation + lagging growth prospects = MORE STIMULUS. Yet, here we have a case where orthodoxy is being ignored, perhaps for the first time in three decades. That is more than a little curious, and speaks to the idea that bubbles more than anything are driving taper talk. Policy is badly misaligned and miscalculated, and the Fed might be belatedly recognizing (finally!) its role in the downside of distorting “markets” in such a heavy-handed manner.

Nowhere is that more true than where inflation expectations, primary dealers and global dollar liquidity all converge – eurodollar funding. The implications of this are being revealed globally, as well as in certain domestic markets.