Repo markets are flashing warnings again, as conventional explanations fall short of full comprehensiveness. We learned today that US treasuries across the curve are once again trading very special in the repo market, meaning negative repo rates for US notes from 2 to 10 years in maturity. Technical factors play a role, as this week’s auctions will change over the on-the-run CUSIPs (with the last auction’s bonds shifting to off-the-run, they will no longer provide enough liquidity to be more broadly accepted as collateral).

As Bloomberg explains, “Many times traders short, or sell securities they’ve borrowed in the repo market, ahead a Treasury sale to profit if prices of the securities fall after the auction.” That is true, as far as it goes, but it does not explain why there is suddenly so much special repo trading in 2013. We have seen negative repo rates, all the way up to and past the 3% fails penalty, in bonds such as the benchmark 10-year. The auction cycle does not explain why 2013 has been so different in the repo “market”, particularly why these specials seem to be persisting.

In fact, there have been quite a few wholesale money anomalies this year, from the gold smashes to eurodollar funding turmoil. Starting from what we know with a high degree of clarity, there have been three separate and significant spikes in repo market fails. A large increase in repo fails can only be due to collateral shortages, so a spike in fails shows any shortage becoming an operational problem. 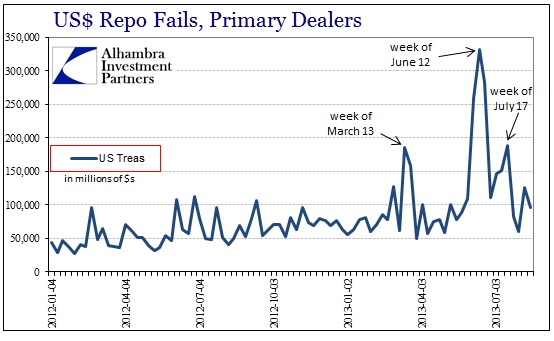 The reason for the treasury shortage according to the conventional narrative is an increase in “shorts”, or those betting on higher rates. While that is correct in a certain sense, I think there is much more nuance here that is necessary to tease out the complete funding picture (with ramifications that flow destructively global, as we see now).

While shorting treasury bonds can be a primary source of specialness in the repo markets, principally on-the-run, we cannot forget about other trades driving collateral demand. I’m talking primarily about derivatives trades, interest rate swaps in particular. In one of the last bastions where mark-to-market is still enforced, swaps are generally collateralized at the onset and then collateral is “called” up and down as the market value of the swap contract floats with “market” conditions. Banks and speculators have to settle positions, factoring in netting, every day.

The behavior of swap spreads, in light of the impact on collateral demand, aligns far too closely to the repo fails above to be mere coincidence. 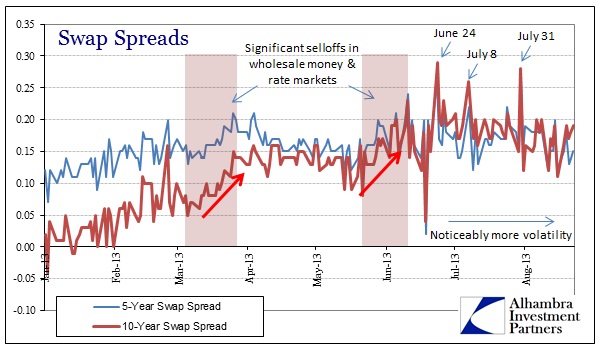 After those instances of broad rate market selloffs, swap volatility has increased (along with the entire funding complex). We have seen abnormal rate behavior since the middle of June, including several large spikes in swap spreads. The first, June 24, coincides with the dramatic shift in the eurodollar curve reaching its local apex and a short-term bottom in the bond market selloff. 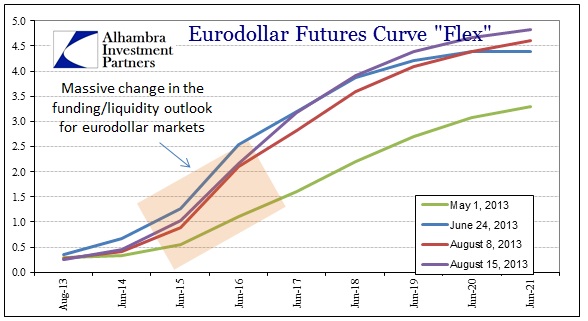 That is not much of a surprise given how these rate and money markets are inextricably linked. The second jump in swap spreads (post mid-June) occurs just days before the third spike in repo fails in mid-July.

There is one more collateral element to add to this line of inquiry: gold. If we line up repo fails against the smashes in gold prices, we see the same “coincidence”. 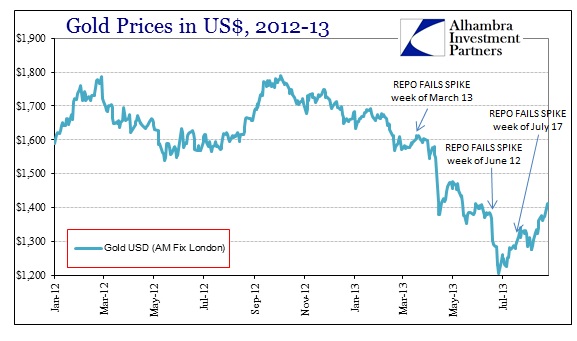 The jump in repo fails precedes the smashes in gold prices, with gold acting as a stand-in collateral when treasury shortages are most acute. Even the third spike in repo fails in July precedes a much smaller interruption in gold prices advancing off the lows at the end of June. Not only that, GOFO first dropped below 0bp on July 8. (NOTE: for an explanation of the relationship between gold as collateral and gold price behavior go here). 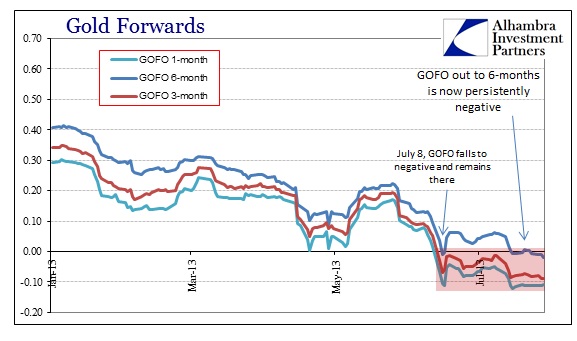 So now we get to the big question: why does the swaps market seem to be playing a central role here?

Interest rate swaps can be used in several ways, not the least of which is speculating on interest rate movements. But in terms of banks and the banking system, the swaps market is like a synthetic bond market yielding all sorts of prodigious carry potential. In the interest rate swap example I used above, a bank paying floating and receiving fixed is an almost exact replica of a bank borrowing in the wholesale markets to purchase a treasury bond. In short, swaps are synthetic bonds.

A bank that is using wholesale financing for a US treasury bond position will be paying a floating rate (the LIBOR rate historically, but more likely the repo rate post-2007 since unsecured borrowing is largely an anachronism) and receiving a fixed coupon from the US treasury. In an interest rate swap, the bank would pay LIBOR + a small spread for the floating rate and receive the swap rate which is tied to the US treasury yield. Working out the spreads and costs, the interest rate swap may actually be more desirable over the repo-ed bond factoring in haircuts and capital or regulatory complications.

Paying floating is essentially a bearish position on interest rates since you are betting that the floating payment will not rise until much further down the road, allowing you to capture that synthetic carry for a long time – or so you hope. If a central bank policy were to “guarantee” that interest rate outlook, then why not go short rates with reckless abandon in highly leveraged synthetic bond positions? 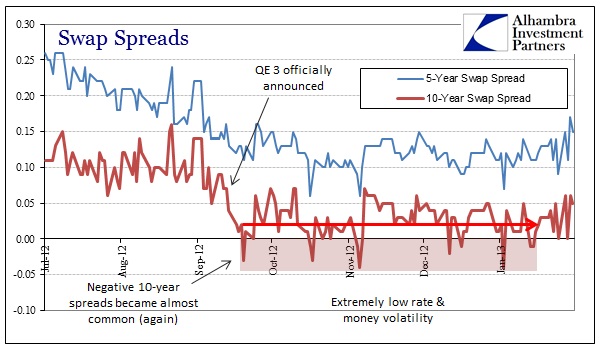 That is exactly what we saw in the latter half of 2012. To the day QE 3 was announced swap spreads dropped, including the 10-year falling to a negative spread. That would indicate a preponderance of marginal counterparties taking the floating leg to receive fixed; that synthetic carry position. We know this was an abnormal demand for fixed payments (and the bearish rate position) because swap spreads are supposed to be positive – an interest rate swap bears counterparty risk, and thus should be priced at a premium to the relevant US treasury yield. That spreads dropped so low and stayed there means a persistent imbalance of demand favoring the bearish rate position (paying floating for the synthetic carry).

From the middle of September until the middle of January 2013 the imbalance carried forward in an abnormally stable range, generating such low funding volatility that made increasing leverage seem far less risky than it really was/is. That is a huge amount of complacency and leverage, all predicated, as we see from the timing, on monetary policy (more precisely perceptions of monetary policy, though derived from public proclamations and forward “guidance” from policymakers). The rate and funding markets took Bernanke’s promise of “open-ended” as literal, and built up money positions and leverage based on that.

Further, because this was a “winning” trade during that period, collateral was flowing in that direction.

It all reversed in mid-March, and has been slowly coming apart ever since. It is not fully clear exactly why there was such a reversal then, but I surmise it had to do with the FOMC meetings along the way. Going back to the January 2013 FOMC meeting, the minutes indicated that,

“A number of participants stated that an ongoing evaluation of the efficacy, costs, and risks of asset purchases might well lead the Committee to taper or end its purchases before it judged that a substantial improvement in the outlook for the labor market had occurred.”

The March FOMC minutes went deeper into that policy “threat”, including a widely circulated and commented staff report:

“The staff also reported on potential risks to financial stability, including those associated with the current low interest rate environment. Some observers have suggested that a lengthy period of low long-term rates could encourage excessive risk-taking that could have adverse consequences for financial stability at some point in the future. The staff surveyed a wide range of asset markets and financial institutions for signs of excess valuations, leverage, or risk-taking that could pose systemic risks. Low interest rates likely have supported gains in asset prices and encouraged the flow of credit to households and businesses, but these changes to date do not appear to have been accompanied by significant financial imbalances. However, trends in a few specific markets bore watching, and the staff will continue to monitor for signs of developments that could pose risks to financial stability.” [emphasis added]

Market participants knew that the central bank was starting to get uncomfortable with its latest QE, at least in parts of the Federal Reserve apparatus. Given the scale of leverage achieved here, it would make sense that this crowding into paying floating would start to reverse as banks lightened positions ahead of any further indications of policy “uncertainty” where it did not exist prior. It cascaded from there, with a big push from policymakers themselves (particularly the Chairman) in May and June.

This is not to say there aren’t additional factors to consider here, including QE’s negative impact on broad collateral availability in the first place. But given the highly connected nature of rate and funding markets, including gold, and the chronology of events, it might be more than fair to say that policy created a monster and then set it loose upon the global markets. That proposes (maybe even proves) unhealthy leverage based on policy rather than true market conditions and forces. The chain reaction as it all unwinds is fully uncertain and more dysfunctional than not, as we get a wider glimpse with time.