Gold Forwards and the GLD Drain

Gold Forwards and the GLD Drain

We have finally seen positive forward rates in the gold markets, though it is too early to make any firm interpretations about the direction of gold prices. We can note that on August 27, forward rates began moving in the positive direction while gold prices hit their most recent high on August 28. It is suggestive of a short-term drop in the need for physical metal, perhaps that physical availability has increased in the short run. It may also be a renewed wave of collateral pressures. 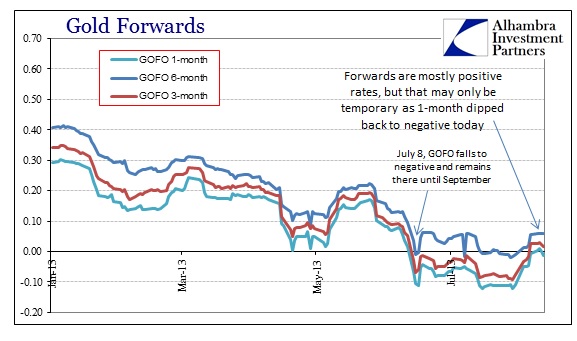 We don’t know yet whether upward price pressure from physical shortage is about to be again overwhelmed by financial and funding processes, the same as we saw in the mid-May to mid-June period. I am pretty certain that the supply of physical gold has been partially met by the SPDR Gold ETF, GLD, and that offers an important clue as to the marginal changes in the gold markets. 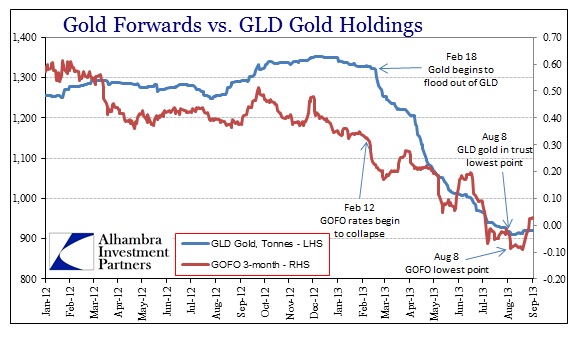 There is still a great deal of confusion about how GLD works and its role in physical markets. I wrote a few months back that GLD is like a marginal gate for physical gold in trust – whenever gold rates fall enough, bullion banks will pull gold out of the GLD trust and place it on lease in the market. The economics of it are pretty simple, as low and negative gold forwards allow a greater spread for bullion banks. Borrowing cash (with GLD gold collateral) at a negative forward is a pretty good enticement, if that cash can earn a return elsewhere in interbank markets.

The bullion banks are in this privileged position because they are the only agents authorized to create or destroy baskets of GLD shares, and thus control the gold attached to those baskets. If gold forward rates fall enough, as we have seen since early February, it unleashes this physical store into the market. From February 18 through August 8, GLD “lost” just shy of one-third of the physical gold in trust.

It is important to note that the action in GLD gold holdings is derivative of other factors. In other words, moving metal in or out of the ETF is not causing changes in gold prices at all, it is a reaction to forward rates and leasing spreads. The fact that forward rates continued to fall throughout this year despite a huge withdrawal from the trust shows just how much gold is needed to satisfy the “market” demand.

What’s interesting in the interim is that the gold/GLD trade-off paused during the bulk of the bond market selloff. 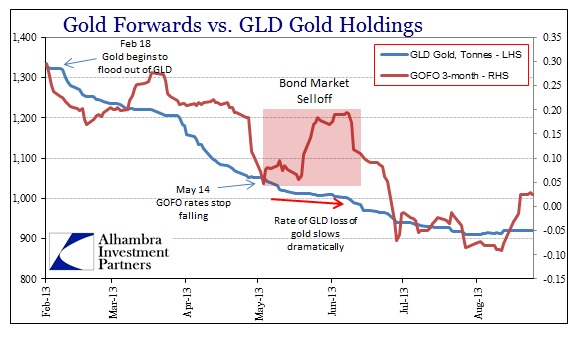 The price of gold fell dramatically during the period, as the second cascade hit toward the middle and latter half of June (right around the time the bond market firesale was at its apex). Taken together with the behavior in forward rates, it appears as if the bond selloff triggered another wave of collateral issues that temporarily interrupted the GLD gold switch. If my theory about gold as collateral is correct (and the evidence continues to point in that direction), a renewed flood of gold hitting the leasing markets from banks trying to meet liquidity requirements during the bond selloff would have pushed GOFO upward, reducing the spread for the bullion banks to earn on the GLD gold switch.

Going backward in time a few months, we see the same thing in mid-March, right around the time all the fireworks began to spark in collateral and liquidity.

We know eurodollar futures are still settling with tightening dollar conditions, though only slightly in August, indicating that liquidity is still an issue in funding markets. Volatility is not yet settled and I would imagine that modeled risk parameters might have trading desks still on edge with uncertainty about funding conditions. The behavior of GOFO since August 22 might be indicative of a renewed liquidity strain with gold leasing activity rising as firms once again appeal to an alternate source of collateral. That might/would also account for gold prices reaching their near-term peak on August 28.

• the backdrop is one of tightening gold availability due to banks using unallocated client metal in leasing activities;
• such leasing activities are due to lack of ample liquidity conduits;
• an appreciable increasing in gold leasing leads to, in the short run, a drop in the price of gold showing up as largely paper gold selling;
• it also means, in the short run, upward pressure on forward rates, despite any shortage, as previously unmobilized metal (the unallocated client gold) is hitting markets from those desperate banks;
• over the intermediate term, these episodes of gold leasing contribute to the backdrop of tightening supplies since the desperate banks will have to return unallocated client gold at some point in the future;
• absent collateral shortage, gold prices rise as tightening pressures are price positive.

As long as collateral problems continue, and the funding markets suggest such a case, it appears as if gold prices are going to be volatile since we have two opposing economic forces acting in close concert with one another.