This week is a perfect illustration of the absurdity of “investing” in this activist age. It wasn’t all that long ago the Chairman of the Federal Reserve was just some obscure bureaucrat that barely rated mention in any mainstream publication or conversation. His job (they have only been “he” to this point) was to make sure currency was stocked at banks to adjust for seasonal flow – largely from the interior to New York City and back again.

It got somewhat more complex once the dollar became the reserve currency for global trading, even under the Bretton Woods gold “exchange” standard, but largely the Fed was an afterthought.

A lament that my colleagues, Doug Terry and Joe Calhoun, and I have grown tired of rehashing is that investing used to be about analyzing companies. Now we spend an inordinate amount of time and resources on trying to figure out exactly what path the Fed Chairman and his FOMC commune will take in further destroying the economic foundation. My time and resources are wasted, piled up onto the real economic resources that are wasted via QE distortion.

Because of this upside down incongruity, we have to pay attention to what they say and exactly how it is said. It is very silly to place so much importance on the parsing of exact language, but that is the nature of the monetary central committee. As I noted yesterday, the word that kept cropping up in the aftermath of yesterday’s decision was “tightening”.

Having spent far too much time in orthodox economics, I can tell you without too much hyperbole that if you listed a monetary economist’s 100 worst fears, deflation would be in 99 of them. Since re-organization in the mid-1930’s, the Federal Reserve sees itself as an instrument to prevent it; all other considerations are just noise for public consumption.

Even the “dual mandate” of “price stability” while “promoting maximum employment” can be seen through the lens of deflation fears. As the Great Depression imprinted upon two successive generations of economic thinkers, it is deflation that is the greatest threat to the dual mandate.

Orthodox economics treats “low inflation” as a danger zone, a precondition of deflation. As an unofficial rule, now twisted into a monetary rule, the central bank targets a “small” amount of inflation for that very reason. The Federal Reserve has picked 2% for various motives, but mostly because of their idea of the “central tendency” of the economy on a healthy trajectory typically involves around 2% official inflation. For them, less than that is flirting with deflationary preconditions. Better to “tolerate” (not just tolerate, but actively seek) a small amount of inflation than to risk disaster; the whole of monetary mechanics revolves around this assumption.

Low inflation by itself is relatively innocuous in the mainstream view, but combined with “tightening” it is the spark and the tinder that lead to disastrous economic conflagration. I don’t think I can overstate enough exactly how important the eurodollar market is to that end. Rising eurodollar rates signal many things to many people, but at its very basic core, rising rates here mean TIGHTNESS. The dollar disruption from May 1 onward was massive. 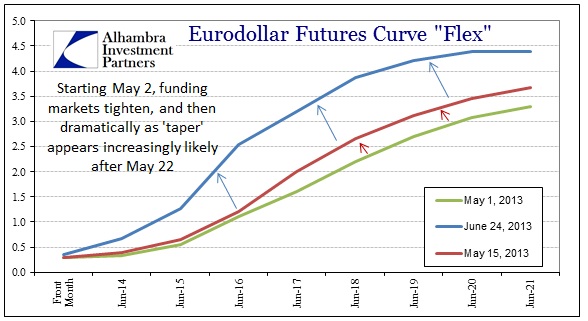 Over the same months, official estimates of inflation have persisted far, far closer to 1% than 2%. More worrisome to the orthodox mind is that no amount of “stimulation” has been able to budge them. That leads to all sorts of bad simulations in policy setting, namely that inflation expectations just may be “anchoring” in the danger zone. That would suggest, in this economic framing, there are greater problems hidden in the economic system.

Add that to dollar tightening, and the result is a re-prioritization of monetary aims.

Of course, with everything about the central monetary committee, this is all conjecture on my part based on what I think I know about orthodox economics. I would have no trouble believing that, given official inflation undershooting the target plus dollar tightening, the Fed would gladly accept asset bubbles and collateral issues to fend off what it believes is a real deflation threat every single time. The dollar tightening in May and June was not enough on its own, but the inflation stubbornness of the “undershoot” released on August 30 (for July) I think was the clincher. 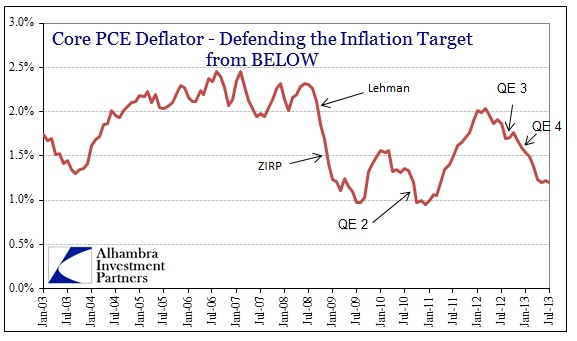 Entering September, the FOMC was looking at its favorite inflation indicator, the PCE deflator, dropping worryingly back to 2009 levels at the same time eurodollar tightness was again being rerun. 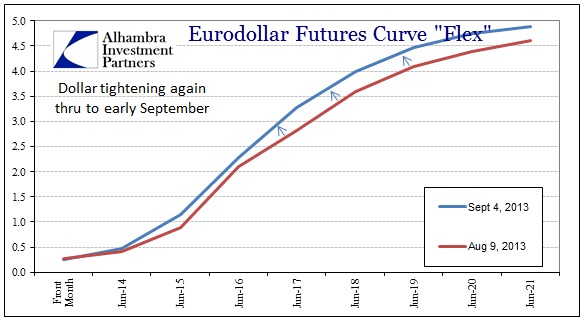 I really believe the September FOMC represents a rearranging of monetary priorities. Further, I think that the hope of taper talk earlier going back to the FOMC meeting in March was related to monetary models predicting better economic fortunes in the months ahead (as they always do). The concerns about bubbles could come to the fore while the danger zone fears would recede as policy worked its assumed magic. Reality hit them in the face over the summer, including the empirical proof that QE doesn’t work.

As for what this all means, I think first it suggests that the FOMC is really scared. They will never confirm as much, owing to their appeal to psychology first and foremost, but I think we have to re-assess policy expectations under that assumption. There are other factors to consider, of course, including repo market viability, but it does seem as if policy has now run closer to the trap. Tightness is inevitable without a real growth trajectory. We are only wasting time and resources trying to predict from which channel it will come.