Who Owns The Market?

Who Owns The Market?

Before 1950, if you asked who owned stocks, the answer was very straightforward: wealthy individuals. Ninety percent of all equities were owned by the household sector, concentrated in the wealthiest segments. Most individuals had little savings to speak of, so stocks really were a plaything of the rich.

All data below is taken from the Federal Reserve’s Financial Accounts of the United States (Flow of Funds) Z1. 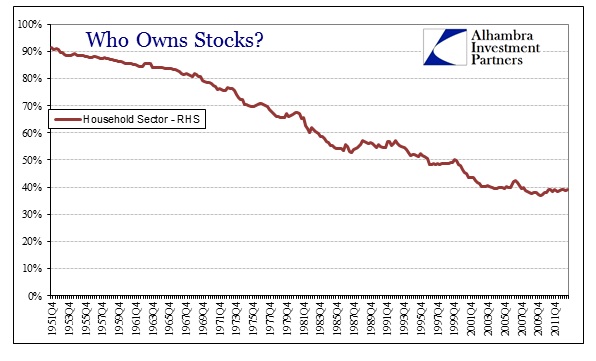 It started slowly in the 1950’s and 1960’s, as “investing” became more of a generalized concept. The changing ownership proportionality began to shift first through pension funds and insurance companies. Less wealthy individuals, only in the aggregate, began to access “price” assets to capture returns outside of interest. 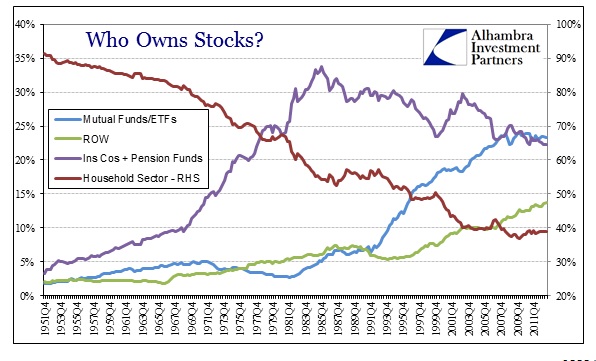 The rise of the pension funds/insurance companies during that time corresponded with a bull market in stock prices. That makes intuitive sense; bull markets are, more than anything, a broadening base of attraction and activity. More “money” flowing in usually ends up with higher prices, basic economics. But it takes a sustained participation to keep prices up. That meant that aggregating smaller investors into pools was the first real modern attempt to expand the base of stock investment.

As the 1970’s waned and stocks went through an extended bear, interest in individual investing shrank. But that changed in the early 1980’s. Rather than simply participate indirectly through pooled accounts, the great bull market of the 1980’s-90’s was built on a foundation of greatly exanding individual participation owing to technology and innovation. It was the rise of mutual funds and other individual account vehicles that broadened the base of participation. 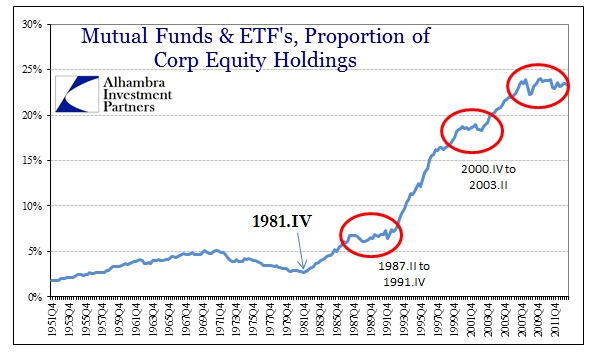 This shifting composition is really not well understood, particularly how these vehicles affect the ability of markets to withstand drawdowns. Price markets are always susceptible to “bear” markets because of the way generalized pricing actually occurs – transaction pricing. If everyone sits on the sidelines and accepts those conducting transactions as price setting, then markets can persist higher and higher. That is, until sellers appear and those narrowly construed prices can no longer be supported by marginal transactions.

In other words, do the individual account vehicles open a new door for crowded trades?

On the way up, they certainly allow individual access to price assets where they did not prior to 1981. As we saw in the great bull market of that time individuals were perfectly willing to accept transaction-generated prices to reflect their willingness to remain largely passive. There was an exception after the Crash of ’87, as the demand for mutual fund accounts paused noticeably.

By the time the mania phase of the dot-com bubble reached its apex, the wave of selling that took the market down was a rather slow moving process (by comparison with other historical events). The fact that market prices dropped by such a great degree but there was no particular disturbance in mutual fund proportions indicates that individual/smaller investors were not, by themselves, a causative factor. They certainly participated, but not in a manner that would suggest an artificial “crowding” effect on the downside. 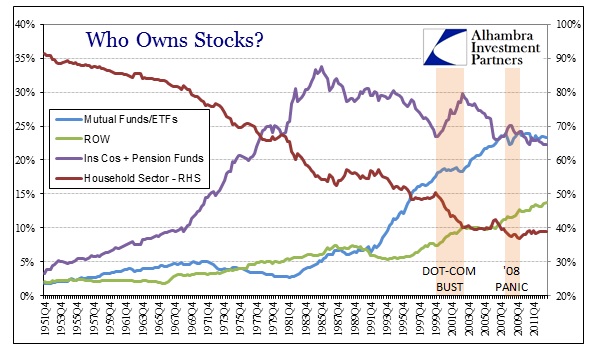 By the time of the Panic of 2008, however, the selling pressures had changed. Not only were household accounts selling again, but there was a significant drop in the proportion of stocks held by mutual funds and ETF’s (which were then a very large marginal owner). 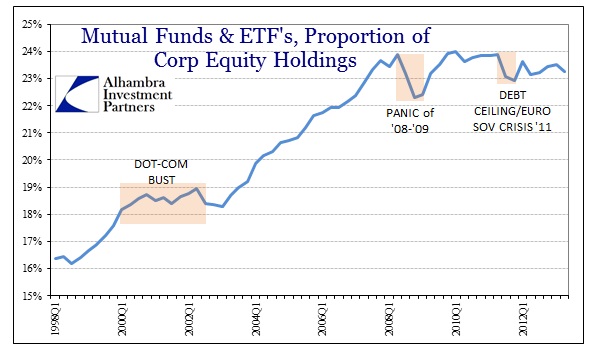 That would suggest a unequal selling pressure from these vehicles, in contrast to the previous market experience. At nearly 25% of all stocks, such unbalanced selling would have mattered greatly. 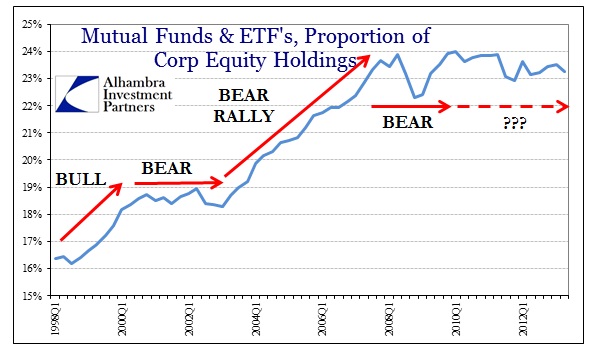 The incidence of proportionality of investor preference for mutual fund and ETF’s as vehicles to hold stocks coincides rather nicely with the market cycles. That would indicate a marginal preference for stocks among the broader base of individual investors, meaning where the “dumb money” goes, so does market prices. Again, that matches our intuitive sense of these “cyclical” markets – broadening participation should be a predicate condition, in a transaction-based pricing system, for sustainable higher prices.

How, then, do we interpret the lack of growing mutual fund participation after the panic? There certainly was a bounce-back period after the bottom in 2009, but it largely ended with Q1 2010 – coinciding with the “flash crash.”

This is not to say that individuals are not participating in the market’s continued price rally. It only suggests that individual retail appetite has not increased, explaining the lack of increase in mutual fund/ETF proportions. It is entirely possible that investors have become fully saturated with investments through these means, and that proportions will not/never increase more than the 22-24% we see now.

On the other hand, I think, given macro conditions and the shape of the broader section of the household sector income/balance sheet dynamic, that price action in the wider market missing the broader participation that one would expect in a true bull market is not trivial. That would suggest other means and methods for increasing, and maintaining, upward transactional prices – other “artificial” channels.

While it is dangerous to draw any hard conclusions here, it is intriguing to say the least. If nothing else, we can say that stock prices, at the margins, appear to have been supported by the ROW sector more than any other obvious segment of demand. Further, the disproportionate selling in mutual funds and ETF’s needs to be recognized as a potential for the wrong-way “crowded trade.” Even the government has begun to see this shift.

In my own analysis, furthering yesterday’s commentary, this seems to add evidence to the hypothesis that this market is indeed very different from previous experience. That may not necessarily be a bad turn of events, but given the context for it I have a hard time “buying” that equation. A real bull market is one that draws in more and more “money” and participation, as that is the only way, to date, price momentum can be maintained over the longer term.