With the federal government shut down, the seasonal adjustment calculations are on holiday with the rest of the statistical agencies. Perhaps that is a positive aspect to the unfolding drama. However, in their absence we are left overanalyzing other major economic parameters. Given the monetary relevance in the weeks after the taper “surprise” and the incoming (potentially) change in Fed Chair, it is slightly useful to begin to process the new personality.

Janet Yellen has a long orthodox economic career resume, including previous stints at the Federal Reserve and the Council of Economic Advisers under President Clinton. In 2004, she nominated and affirmed to head the San Francisco branch of the Fed.

In recent months, the mainstream has been pushing the narrative of her assumed expertise in the housing crisis/bust. It amounts to an emotional appeal to establish some kind of economic superiority, namely the refrain of “she saw it coming.” The basis for this idea comes from an October 2005 speech she gave in Salt Lake City, Utah. In it, she referenced that fateful word,

“Certainly, analyses do indicate that house prices are abnormally high—that there is a ‘bubble’ element, even accounting for factors that would support high house prices, such as low mortgage interest rates. So a reversal is certainly a possibility. Moreover, even the portion of house prices that is explained by low mortgage rates is at risk.”

That sounds a lot like a prescient expert who “saw it coming.” We should expect, then, Ms. Yellen was a vocal proponent arguing in favor of attenuating any bubble-related collateral damage at the one place she wielded influence: the FOMC.

By the time of the December 2006, FOMC meeting, the housing bust was already beginning and was starting to impact a growing circle of secondary and anecdotal indications. At that meeting, Yellen voiced concerns that were given to her by contacts with developers and mortgage financers in her region, but then concluded,

“The correction in the housing sector has continued, even sharpening somewhat compared with our expectations. Still, there are some encouraging signs that the demand for housing may be stabilizing, probably assisted by recent declines in mortgage rates.

“After a precipitous fall, home sales appear to have leveled off. In addition, equity valuations for homebuilders have continued to rise in the past couple of months, suggesting that the outlook for these businesses may be improving. Finally, the gap between housing prices and fundamentals may not be as large as some calculations suggest because real long-term interest rates have fallen quite a bit recently, raising the fundamental value of housing.”

That doesn’t quite live up to the crafted reputation. Saying there is some downside risk, but then minimizing it, to the housing sector is not the same as understanding the conditions and the implications in the full context of the disaster as it unfolded.

At the May 2007 FOMC meeting, she again expressed some “concern” about housing, but never connected the dots to the wider financial system’s coming collapse, nor, far more importantly, how that would actually doom the economy in 2008/09.

“Taking a longer view, I anticipate real GDP growth over the next two and a half years [2008 & 2009] of about 2.6 percent, just a bit below my assessment of potential. My forecasts of both actual and potential growth are a tenth or two stronger than the Greenbook forecasts; but the basic story is very similar, and the underlying assumptions, including the path for the nominal funds rate, are essentially the same. I view the stance of monetary policy as remaining somewhat restrictive throughout the entire forecast period. The key factors shaping the longer-term outlook include continued fallout from the housing sector, with housing wealth projected to be roughly flat through 2008. Given the reduced impetus from housing wealth, household spending should advance at a more moderate pace going forward than over the past few years.”

That pretty much obliterates the idea that she “saw it coming.” She may have appreciated and even harbored perceptions about an imbalance in the housing sector, but so what? That it was never connected to monetary policy or the wider economy is really all that matters.

What is clear from reading through the transcripts and academic work of Yellen is that she is very much a conventional economist in every sense save maybe one (more on that in a minute). To illuminate this point, at that same May 2007 FOMC meeting, she noted that,

“But the hypothesis that the recent decline in productivity growth is mainly structural does not seem to me to square well with the broad range of available evidence. Recall that in the 1990s there was a whole constellation of evidence—including a booming stock market, robust consumption, and rapid business investment—that was consistent with a hypothesis of a lasting increase in the rate of productivity growth. In contrast, over the past year or so, business investment in equipment has been very sluggish and more so than seems warranted by the deceleration in business output.”

There are two substantial thoughts exercised in this one quote. The first is the reference to the “lasting increase in the rate of productivity growth” that was seen in the late 1990’s, as it had been assumed to be a permanent fixture of the US economy largely because of orthodox monetary economics practiced by the Greenspan Fed. This “new normal” or “permanent prosperity” impulse is emblematic of the hubris of growing bubbles and the logical fallacies they produce. What looked like a “lasting” productivity trend was just the dot-com bubble’s effects. In other words, Yellen and the FOMC still could not see the dot-com bubble for what it was nearly a decade later.

The last part of Yellen’s quote pertains to why businesses were not as likely to invest in IT and capex relative to economic expansion in the housing bubble period. Beyond the simple idea that growth was being driven by the leakage of housing (the infamous “wealth effect” of housing ATM’s) and not business expansion, only an orthodox economist would fail to note that businesses have other outlets for profit use. The most prominent in that period was share repurchasing and M&A “investment.” In other words, it was nothing more than continuing bubble-type behavior that is not captured by the pseudo-precise economic accounts that determine interpretation.

In reality, her 2005 comments on the housing bubble were not all that distinguished to begin with. The academic side of the Fed had been keeping score on the housing sector in real time. It was noted as early as the middle of 2003, two years before that Utah speech, that housing moved well out of expectations. This was highlighted in a 2009 Fed paper.

“As is clear from the figure, the housing market developments over 2003 through 2008 were far outside the 2-standard deviation confidence bands based on observed macro variables, including the federal funds rate and the VAR’s estimated parameters. With that said, it is important to note that the confidence interval for the share of residential investment in GDP includes 5 percent for much of the period up to 2006 – which would have been the highest realized share in over 20 years; in this respect, accommodative monetary policy was certainly supportive of macroeconomic activity and a source of strength in the housing market.” [emphasis in original] 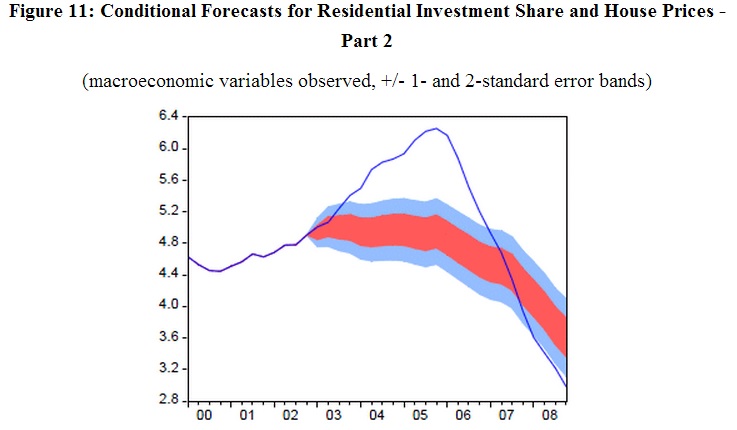 When Yellen made her remark in Utah, it did not signify, as is clear from subsequent comments, any deeper understanding of the housing bubble’s relation to the bubble economy, but rather simple orthodox, mechanical interpretations of the Fed’s models. All it proved was that she could read a chart, nothing more. She fit right in at the FOMC, practically undistinguishable from the rest, as there was no particularly useful insight into simply observing housing prices were acting abnormally.

If there is one point that makes her somewhat noticeable in terms of philosophy, it is a deeper mistrust of “markets.” In a New York Times article from August premised on the idea of a horserace for the Chairmanship between Yellen and Larry Summers, it was noted that she had a reputation in her work for disavowing markets.

On second thought, that is not all that unique, either. It fits right in with the FOMC pattern in the post-crisis age. Markets are to be tamed, overridden or downright obliterated in pursuit of “our own good.” The tide of the Philosopher kings rolls onward.