There has been quite a bit of buying interest in the treasury markets the past few days, bringing the 10-year yield back down toward 2.60%. This trend since September 4-5 has only partially retraced the dramatic selloff since early May, but has at least moved the benchmark significantly away from the 3% psychological level. It’s a move that has been echoed to an even greater degree in other rate-sensitive markets, particularly junk debt and equity REIT’s. 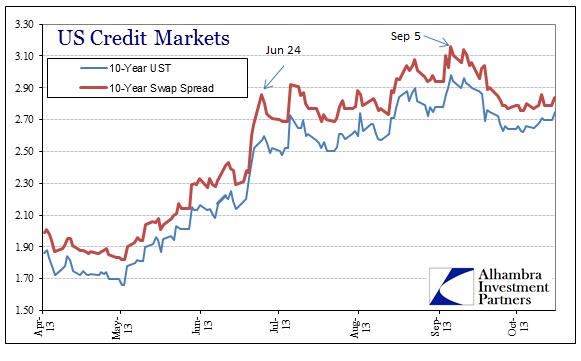 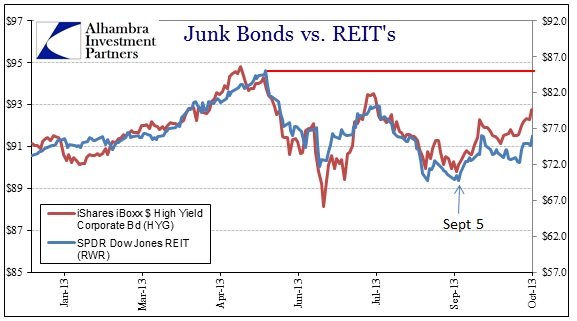 There remains an interesting dichotomy in the REIT market, however. Equity REITs have regained about half of their losses since the September 5 bottom. Mortgage REITs, those highly leveraged and liquidity susceptible vehicles, by contrast are still lingering near their lows. While up about 4% since that September 5 inflection, they are still off around 20% since the May highs. 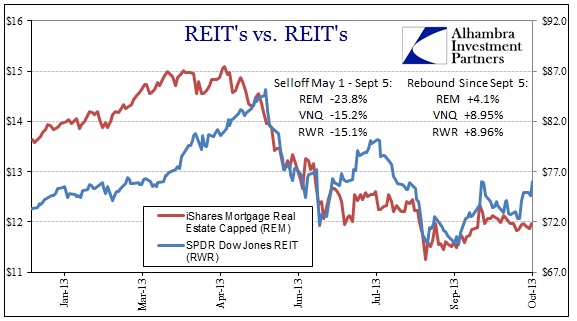 That would suggest there is still a fair amount of concern/fear not over the housing market (otherwise equity REITs would be of more uniform performance) but liquidity and dollar funding conditions.

That is, in fact, what the eurodollar market is telling us. The dramatic tightening from May 1 to June 24, and then September 4, has only slightly been reversed. In other words, dollar loosening has been very small by comparison to the taper scare. That would suggest funding markets are not nearly as sanguine about dollar conditions as other markets, including currencies and interest rates. 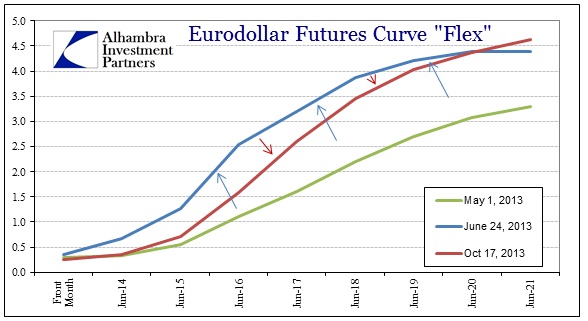 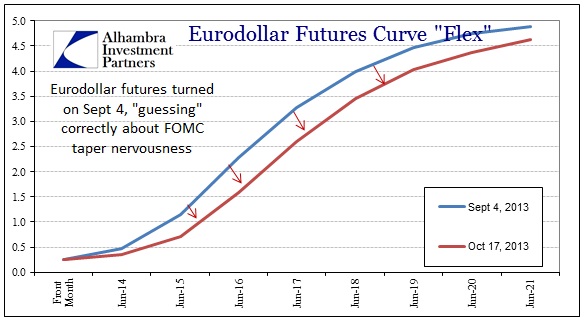 To me, that further suggests that this divergence in intensity of the credit market rebound may be due to the difference between retail exposure in each marketplace. There is very little (if any at all) in eurodollar futures, while equity REITs and junk bonds have been the preferred vehicle for the retail yield chasing, especially through mutual funds. And it is funds that may be driving the volatile swings, as technical flows seem to be playing a role here.

If that is correct, then the yield moves in the retail-heavy markets submit a renewed complacency to chase yield with less regard to recent funding volatility. That it is not matched by institutions should be more concerning about where rates and dollar tightness might be heading in the next few months (institutions listening to/advising the World Bank?).

To drive that point home, there has been little change in swap spreads really since late June. Other than a slight drop in the 10-year spread, the swap market is not positioning for extended complacency that we saw pre-selloff. There has been no retrace at all, suggesting that institutions are very much wary of volatility going forward – a sharp contrast to autumn 2012. 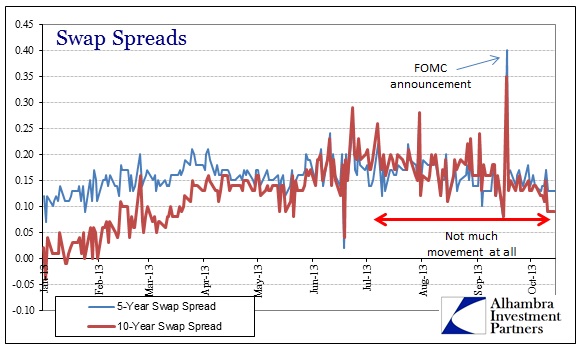 Taken as a whole, it would seem as if retail momentum has been moving some of the more visible interest rate markets. We can surmise from the lack of institutional follow-through that there is a great deal more concern than would appear on the surface. It may also suggest another selloff in rates is very possible, regardless of any “safety” bid that may develop due to gathering economic weakness.