The third and latest gold/collateral episode appears to have been related to the debt ceiling, and so it would make sense that gold prices would now be able to shake off the collateral side and resume on a physical shortage basis. Forward rates were most negative on August 22. The sudden move upward in GOFO began on August 27 (as gold prices were just moving above $1,400), the Monday after Treasury Secretary Jack Lew notified Congress that he would exhaust statutory borrowing authority in “mid October.” 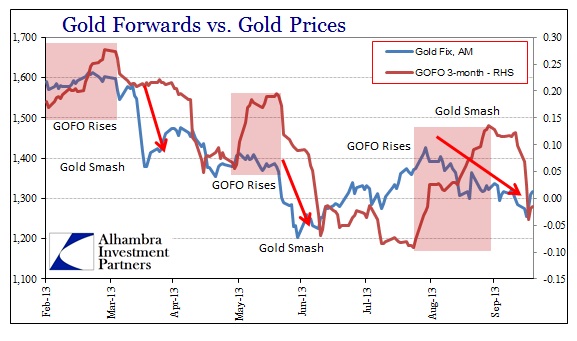 In processing that piece of information, repo markets began to sense the possibility of a debt issuance shortage playing on collateral availability. If the US Treasury were forced to suspend debt auctions, even if that were a low probability event, it would reduce the liquidity available to repo market; or at the very least reduce the “visibility” of auction-based supply of new on-the-runs. In addition, there was potential at least for repo lenders (cash owners) to grow wary of t-bills and any bonds or notes maturing in that window of uncertainty (as some t-bills did in fact start to trade as if they were increasingly shunned).

It would make sense, then, that institutions might respond to such funding/collateral haziness by appealing to alternate liquidity measures, if only a little at first. They might also “term out” their repo structures by changing the funding mix with less overnight and ultra-short-term in favor of several month arrangements. At that point, particularly given the negative and persistently low forward rates and spreads, it might have made a lot of sense as a measure of prudence to add a gold lease termed over a few months rather than depend on rolling over nightly t-bills.

The first credible rumors of a deal were floated late on October 10 and into October 11, and although there were still hurdles, it appears as if markets began to incorporate a growing probability treasury action would be back to normal relatively quickly. As the debt ceiling drama rightfully faded, the marginal pressure for gold collateral seems to have shifted, and the leasing market returned to its “shortage” stance. 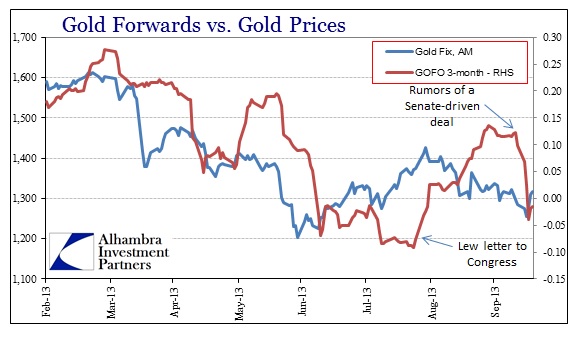