Intruding Upon A Nation With Nothing To Do

Intruding Upon A Nation With Nothing To Do

In the middle of September, nearly a full year after the yen began its devaluation, the Japanese administration held talks with business lobbies and labor unions. The focus of the affair was to make sure businesses knew that the intentional appeal of yen devaluation and thus commodity inflation was doomed absent wage growth.

“’Our mission with these talks is to build a mutual understanding among the three parties on how companies, facing severe global competition, can still increase their profits and pass on the benefits to workers in the form of employment and wages,’ economy minister Akira Amari said after the inaugural meeting.”

Apparently businesses in Japan are unaware that they can “share” profits with workers. Usually in an erstwhile capitalist system, businesses give out raises and increase wages (as well as the number of workers) because they see value in that proposition. It’s not a social good or government diktat, rising wages are a signal of true wealth creation.

It’s clearly not happening in Japan no matter how much the statistics say Abenomics is “working.” Sure, inflation rose in September to the highest in five years, but that is a blight, not a mark of accomplishment. Again, without wages, Japanese citizens are left behind and the whole thing ultimately fails – and they know it. We already know how the current Japanese authorities feel about the private economy ruining their brilliance.

If anything, the unleashing of yen devaluation appears to have made the wage situation worse. 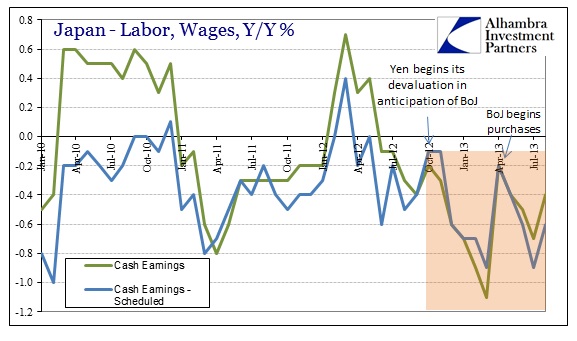 Again, since labor and compensation relative to profits is a value proposition on the part of businesses, without a reason to expand I don’t see how or why they would increase wages. The profits coming in, particularly from exporters, are just phantom currency dilution. It’s not real in any meaningful sense, as you can see from total hours worked. 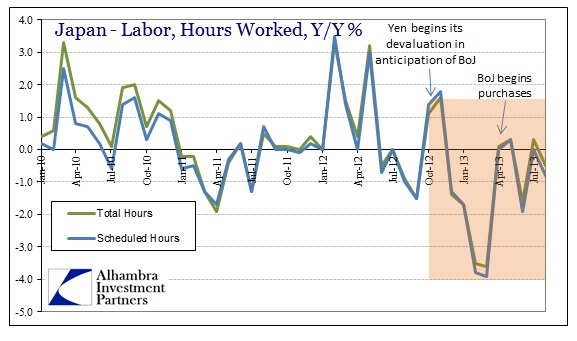 The Bank of Japan and Abe administration want Japanese businesses to pay more to their workers when they are doing less and less. Outside of government coercion, why on earth would they do so? Businesses, unlike economists, understand this dynamic. They react to this commodity pressure/phantom profit scenario intuitively – they don’t increase their cost structure, they actively manage it, cutting back whenever possible. 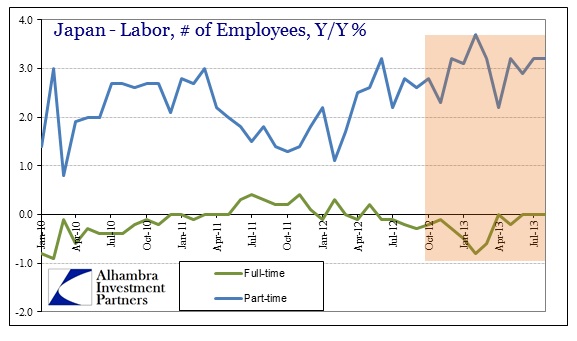 As much as conventional wisdom believes the “part-time economy” is an American phenomenon tied to Obamacare, it is a rational response on the part of business to monetary intrusion. What the three charts above show is that Japanese businesses are more interested in controlling their costs than actively seeking to “help” and do their “social duty.” They are making the best of a bad situation and unfortunately, the more successful Abenomics is with commodity pressures, the more businesses will appeal to cost management.

The primary appeal of the yen devaluation was as an export stimulus. There is no argument that exporters are enjoying growing profitability due to yen dilution. But that, again, is a false indication. On the surface, exports grow in nominal terms, only appearing to confirm the original monetary thesis. 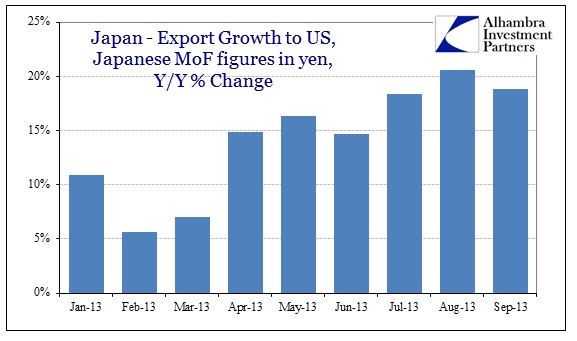 Year-over-year, exports are growing at nearly 20%. That should be a huge boost economically, but, as you might guess from the hours worked figures, it is a mirage. It’s just more yen for less activity. Adjusting for currency, exports are actually shrinking (demonstrated most clearly by trade with the US). 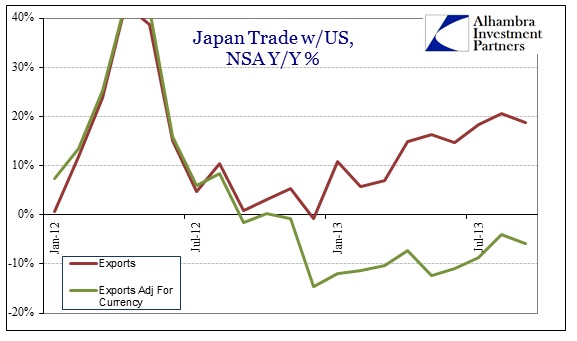 As long as currency instability impacts production in terms of cost emphasis, Japan will be stuck as businesses continue to move capacity offshore. In the end, while Japan used to be an export dynamo within Asia, it is increasingly importing goods it used to manufacture domestically (like semiconductors and electronic components). That also contributes to the decline in hours worked, as productive capacity leaks, slowly over time, to other former export buyers. 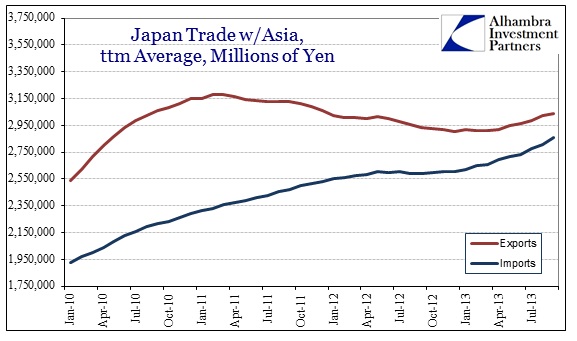 The end result is an economic system slipping further behind as any success to date has been far more ephemeral than tangible. 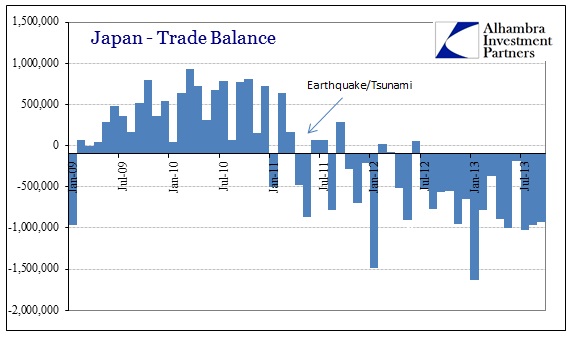 Economists continue to believe that these phantom profits will drive businesses to increase wages. That is an incomplete thought, however, since there simply needs to be something for labor to contribute first. Again, it’s a value proposition. Why pay more to labor when the government is essentially giving you more “money” for less production? And since those profits are already devalued, they are far less meaningful than economists assume.

The political authorities are catching on to this, thus the high level talks and bursts of frustration. If monetization could actually create wealth, it would have by now since this is the ninth (or tenth) application in the past 15 years in Japan. And it is not just Japan, as the part-time trend confirms. The US is largely experiencing the same drawbacks. It all begins with unstable monetary conditions that push businesses toward cost emphasis, rather than risk emphasis that would create the beneficial cycle of growing capacity, thus true wealth, thus wages.