We finally get a peek at the pre-shutdown consumer segment from the delayed retail sales report. There was a temporary bounce from the horrible start to the year through July, but sales have cooled off precipitously right in time for the back-to-school season. Now we know why WalMart was rumored to have been so concerned about its inventory heading into the now-three month Christmas shopping season.

The growth rate in September was slightly below what we saw in the disappointing second half of 2012, so momentum heading into the holiday period is in the wrong direction. Further, given the collapse in refis and housing activity, there is one less pillar supporting potential consumer activity.

As I have noted before, the July 2013 bounce is not unique to the series, as we saw the exact same pattern in early 2008. Viewing retail sales ex-autos & gasoline, the trajectory is actually very close between the time periods. The exception, of course, is the eventual collapse in sales beginning in November 2008 (retail sales actually ticked upward in September 2008, and then were only slightly negative in October 2008). I don’t anticipate another collapse like that in the worst quarters of the Great Recession, but the fact that retail sales behavior is closely mimicking that period is revealing in a lot of ways. 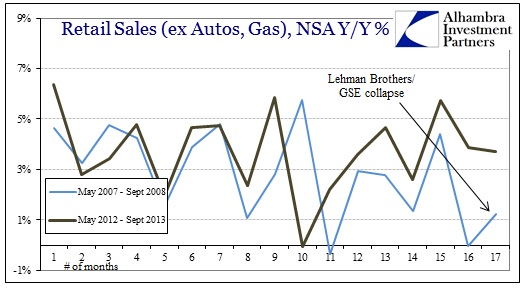 That point is bolstered by the degree to which other retail segments have performed this year, with and without a midsummer bounce. In totality, sales have been at recessionary levels since the dramatic deceleration in the second quarter of last year. 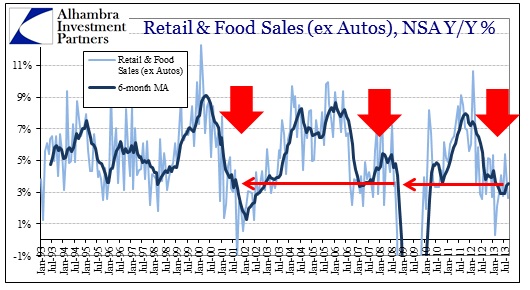 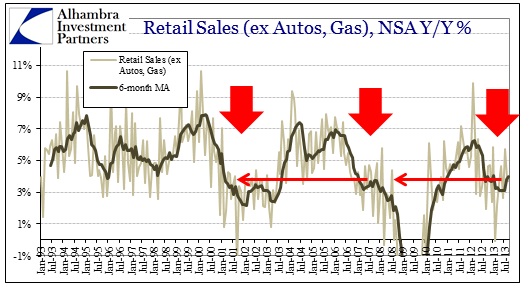 Turning back to WalMart, sales at General Merchandise stores actually declined slightly in September over September 2012. That is significant because it alludes to the state of consumers on the “wrong” side of the bifurcated economy – those that cannot “take advantage” of the so-called wealth effect.

To ensure against bias from the growing online shopping trend, we can combine General Merchandise sales with Nonstore retailers. Again, the familiar pattern emerges. 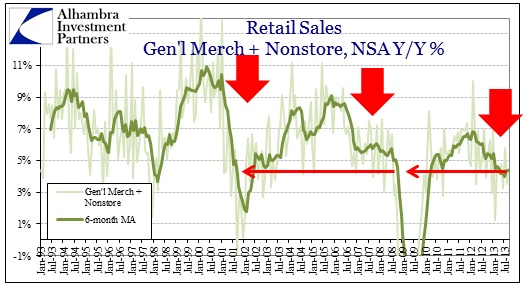 The “wealth effect” is not working in any meaningful way. The economy is also clearly not responding to QE, unless one ascribes the July bounce to that measure (though I don’t see how the two relate, given the lack of QE in the 2008 recession, but one could).

I don’t think there is much doubt that retailers are preparing for, at best, the worst holiday season since 2009. They certainly understand the consumer dynamic even if economists (and bankers) are perpetually optimistic, monetarily speaking. If the mainstream of economists and statistical agencies would remove their trend-cycle bias, they might actually concur.