The Great Depression was more than a monolithic period of economic calamity. In fact, it was more like a series of crises interceded by hope and optimism. After the initial collapse from 1929-33, the years immediately following appeared quite robust. Stock prices rebounded sharply as did consumer prices – the “inflation” that so many modern economists pine for.

However, that period of “recovery” was interrupted rudely in 1937 by another setback. In certain economic accounts, the collapse in 1937-38 was the worst in US history apart from the 1929-33 disaster. That relapse was when hope turned to durable despair, making that decade unparalleled in dysfunction.

The “recovery” years were enough to convince the Federal Reserve in 1935 to rearrange its priorities. Having been given new authority to regulate bank reserve requirements, the Fed sought to use that authority to guard against inflation pressures they felt might build once all the massive and idle bank reserve balances were finally unleashed. I wrote in June about the eerie parallels between that period and the current period, particularly as it related to tapering and concerns of inflation ultimately flowing from massive and idle bank reserves today.

“At the December 17-18, 1935, meeting of the FOMC, the governors (then including all the heads of the regional banks, before the board was reconstituted by legislation the next year) voted 7-5 against a measure to increase the reserve requirement on the banking system, a new control lever ceded to the Fed in the new regulatory arrangements of the New Deal age. The measure was voted down not because the FOMC was against ‘tightening’, but because there was no full consensus on the means through which to accomplish it.

“In regard to that last factor, the Fed chair introduced a revised resolution that passed 8-4 certifying the board’s stance that monetary inflation was in need of attention, only that the manner of attention was in doubt (some members preferred to use open market operations).”

The effects of the eventual tightening of required reserve balances were immediate, beginning, as you would expect, with the banking system.

NOTE: that statistics presented here are taken from the original contemporary data provided by the Federal Reserve’s monthly circular. Economists may reject those values having substituted more “modern” philosophies about data collection and statistical analysis, and there is some validity to that, but there is also value in viewing the period as those who lived through it. In some respects the original data may be more “pure”, free from statistical entanglements that have produced less than desirable results recently. Further, there is a wealth of information about how observers who were living through that period thought and analyzed what was happening in near real time that is lost in the wash of time and theoretical evolution. 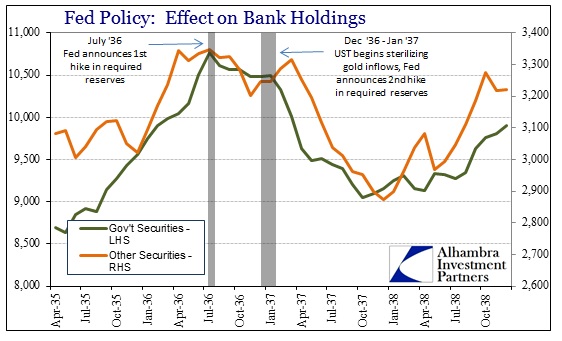 The most obvious effect of the monetary policy “taper” was banks began to sell securities to raise liquidity. The idle reserve balances the Fed viewed as potentially hostile were nothing of the sort, as banks were holding liquidity in reserve as a lesson of the 1929-33 collapse. When the requirement was increased, banks simply recreated that cushion by increasing available liquidity still further. 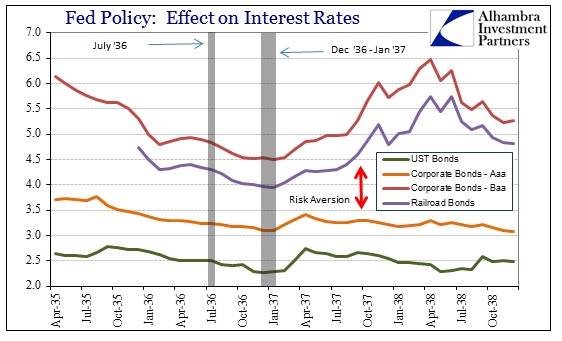 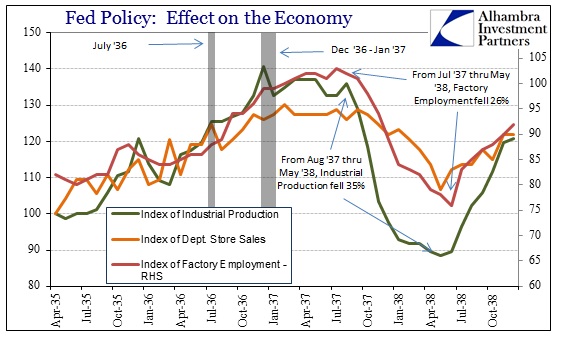 Risk aversion rather quickly flowed into real economic activity. While there is no doubt there were also negative effects coming from the Revenue Act of 1936, with its undistributed profits tax, the bond market and bank funding conduits to businesses were shut nearly completely by turmoil in finance. Industrial production, employment and economic activity collapsed beginning in July/August 1937. Again, the scale of the setback was enormous, owing largely to the dependency on the monetary character of the recovery. 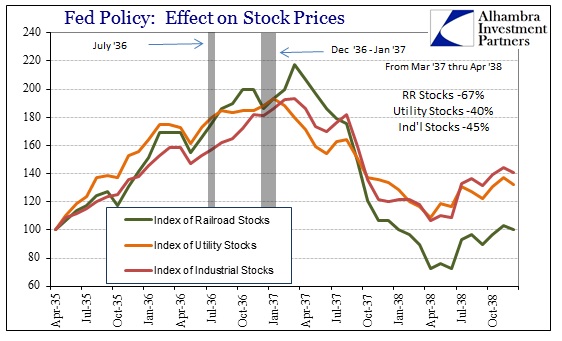 As expected, stock prices that had been on an absolute tear suddenly reversed. In the case of some of the more risky shares (railroads in particular), prices collapsed spectacularly. What was once believed to be an unstoppable rise suddenly shifted into an agonizing and “unexpected” reversal. 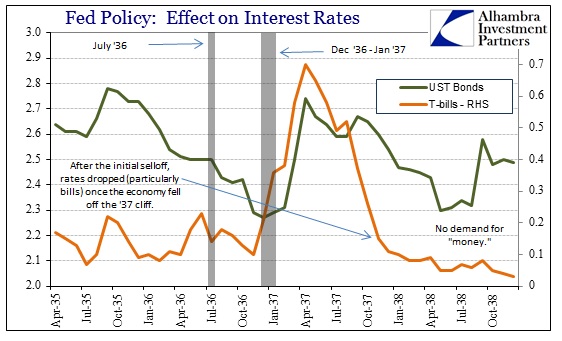 Again, as we can see from t-bill rates, there was little actual demand for money once the economy was turned back into recession/depression. What investment activity that was carried out was placed in risk-free securities, thus pushing yields down to essentially nothing. With no demand for money or economic exchange, wholesale prices succumbed to the deflation impulse yet again. As we see in the current economic circumstances, money supply does not always directly translate, and when it doesn’t there is a real danger. 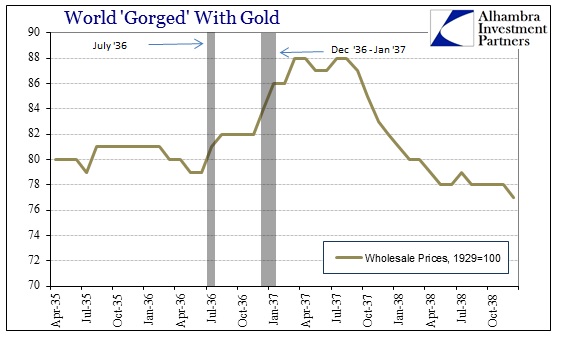 So where the Fed felt justified when wholesale prices began to rise in 1936, the trajectory shortly thereafter obliterated that rationale. The recovery was not a real recovery, instead relying far too much on the money illusion.

But the real problem here, and perhaps the most pertinent parallel to our current age, is that the money supply was continuously robust. There was no drop in available money, only the flow of currency and securities emanating from the banking system. The Bank for International Settlements decried this “deflation” in a world “gorged with gold.” In other words, it was not a failure of money, but of policy that could not or would not understand that there were serious defects to the monetary approach to the initial recovery. 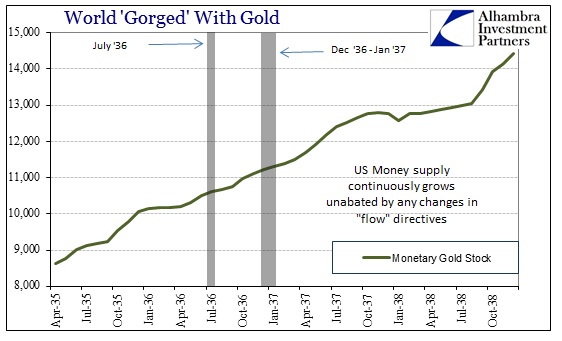 In the current age of unending QE in almost every corner of the monetary globe, with the ECB now rumoring entry, there is again this misunderstanding about the exact nature of risk aversion as it relates to money supply. QE appears to be a world gorged in fiat reserves, but, as this summer’s taper talk taught, flow is much more important. If anyone needed a modern demonstration of that, look no further than the relationship between mortgages and mortgage rates in the past five months.