The rapid growth of the eurodollar market made closing the gold window viable. Without an international mechanism to settle trade imbalances, there was no way to keep the dollar as a reserve currency. That is why SDR’s were first conceived, and funded, in the 1960’s. There was every intention to ditch the dollar and move to a single, global currency run through the IMF.

At some point it was realized that eurodollars could be an alternative to gold (we don’t know exactly when, but it probably related to experience during the two-tiered gold market and the usefulness of dollar swaps during the 1967 sterling crisis). But the eurodollar/swap standard that evolved was very different than “money.” First, the system was a wholesale, based on fractions of fractions as I demonstrated in Part 1 of this series. The ultimate disposition of trade was now debt. No longer would banks act solely as clearing agents, largely in London, transferring gold and account ledgers for gold claims between importers and exporters. Instead, banks became lenders of eurodollar credit between importers and exporters. This is not a subtle or trivial difference.

The effects were immediate – and devastating. Not only was there runaway inflation in the US (the second half of the 1970’s period of the Great Inflation was fully a dollar phenomenon), but the trade imbalances that used to be largely manageable exploded. The Latin Debt Crisis was fully related to the change to a debt-based, non-money eurodollar standard. This is why the term “petrodollar” is misleading.

For the early history of the eurodollar market, debt was almost totally related to global trade, as designed. Statistics are not easy to come by, but the BIS estimates that less than 7% of all eurodollar debt ended up as claims on US residents. 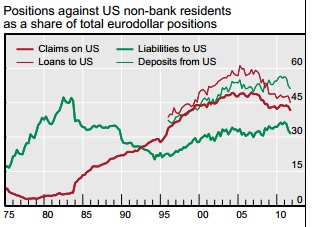 Notice the trajectory in the chart above for the thick red line (claims on US) as it changed in the 1980’s. There is a little fuzziness to it related to the reclassification of Caribbean banking centers, but somewhere in that decade credit began to “leak” back into the US. With the US already using dollars, that credit was clearly not aimed for US trade. It was the coming financialization.

The Federal Reserve in December 1990 and January 1991 removed all capital restrictions and charges on eurodollar deposits of US banks (called Eurocurrency) through amendments to Regulation D. The effect was immediate, as shown in the chart below (from the IMF). 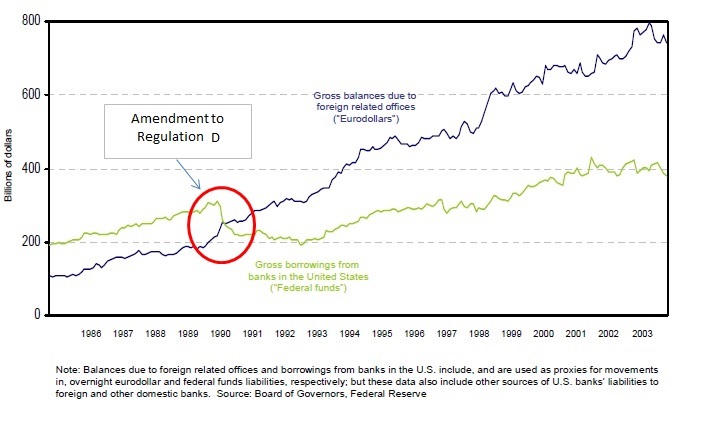 Eurodollar funding of US bank operations immediately overtook federal funds as the primary source of wholesale money. Throughout the 1990’s, eurodollars grew to nearly double the size of federal funds usage. As noted in Part 1, that did not present a problem as the accounting and arbitrage connections between New York and London fostered a very closely integrated money system; until August 2007.

The removal of Regulation D reserve charges allowed US banks to further shift balance sheet capacity to London due to regulatory arbitrage. That meant much faster credit expansion was possible. But there is only so much trade in global goods that can be based on this type of monetary system, so increasingly this credit expansion moved away from trade-related activity to more pure finance.

Thus the upward slope of the thick red line in the BIS chart (claims on US) represented not just credit growth leaking back into the US but financialization being driven by financial firms (balance sheet capacity) of all large global banks.

As much as there was a political impulse for a common European currency, there was as much, and I would argue more, drive coming from financial concerns. The more developed the eurodollar market became, the more it attracted bank resources away from local capacity. In Europe, this was known as “hub and spoke”, as European banks used local currency deposits as their entry into eurodollars – via currency derivatives. 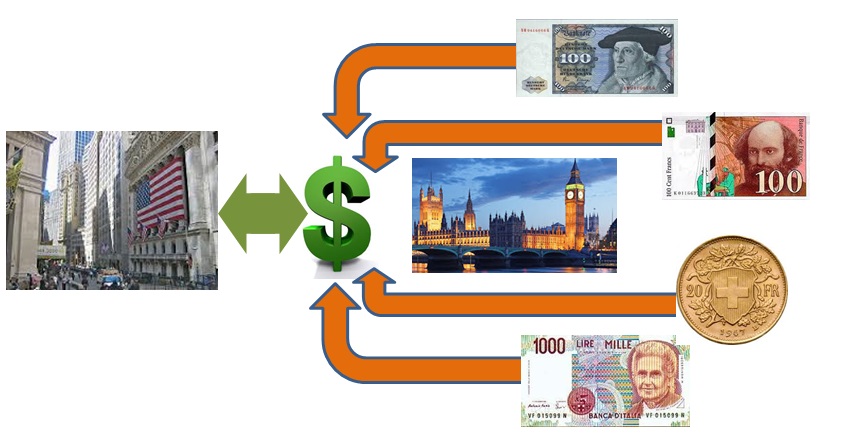 So the confluence of wholesale money and evolution and ultimately depth in derivatives drove finance through eurodollars. And its ultimate disposition, claims which are debt instruments of some type whether loans or bonds, was increasingly on US residents (people, businesses and banks). The euro, then, was an answer to keep financial resources for European residents. European politicians saw this movement of banking focus and wanted an avenue to bring it back toward the Continent, but it was too late by 1997.

That is perhaps the most confusing element of eurodollars – the name. The “euro” portion only denotes dollar markets not located inside the United States. It came to be known as eurodollars because trade was largely conducted in London in US$ denominations. That made sense, since the global gold exchanges was still largely located in London. So as eurodollars took over from gold, it made sense that would be the location of the bulk eurodollar operations.

What was surprising was the use of eurodollars to fund debt inside the US. That was fully unanticipated.

If you look back on the BIS chart above, there is a noticeable upward inflection around 1995. Despite what many believe about the housing bubble, it actually began in the mid-1990’s, coincided with this growing financialization of eurodollars. 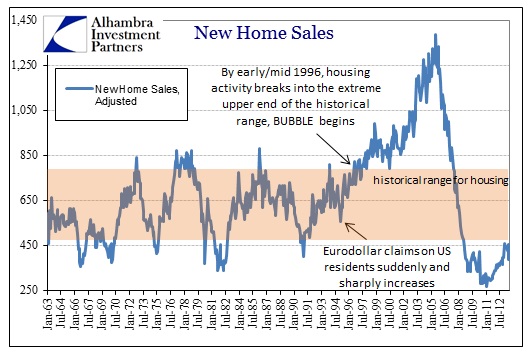 The pace of home construction and sales activity had been stable for decades. Suddenly, there was little stopping almost exponential growth (and this is only one avenue for eurodollar-based credit and expansion; there were others) and it was certainly not driven by demographics. Anyone that still proclaims the 1990’s as part of some Great “Moderation” is using the wrong criteria (or, more likely, doesn’t understand the evolution of shadow banking).

By the 2000’s, credit expansion was immense, drawing in bank resources from all corners of the globe. I have used the Swiss example before, but it bears repeating. Because Swiss banks were uniquely situated in a global banking center, they were able to generate deposit liabilities in numerous currency denominations. That also meant they were able to direct credit flow into the same. 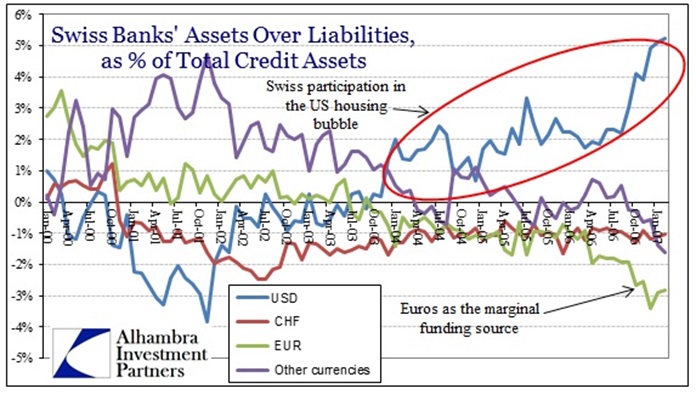 Throughout the late 1990’s, the Swiss banks were largely net users of dollars to fund asset positions (debt holdings) in other currencies. That changed during the 2001 US recession, and by 2003, just as the mania was getting started, the Swiss banks had totally changed course on dollar-denominated assets (US$ MBS). The imbalance grew truly immense during the housing mania, to the point that Swiss banks were net dollar holders to the tune of 5% of the entire system’s asset base by the end of 2006. The housing bubble was eurodollar financed!

This was not credit directed toward global trade – this was not a replacement of the gold standard.

The evolution in banking and, particularly, central banking changed the character of the eurodollar markets into a financial conduit for “money printing.” Aided by policy and the ageless desire of banks to ruthlessly expand without limitation, dollars were being created, traded and derived via banks everywhere. This was thought to be an immense privilege of the reserve currency, but in reality it was central bank-aided and condoned debasement and disaster. It was not a privilege at all, but rather a full abdication of responsibility. If you want to know where the asset bubbles came from, look no further.

The final part of this series will look at the eurodollar market post-2007. Banks have largely fled, especially the Swiss, and dollar funding here is a lot more problematic than you may realize. That’s in no small part due to the fragmentation which remains.