In Virgil’s Aeneid, Laocoon advises caution over accepting a large, wooden horse from the Greeks who had been besieging his Troy. His remark, timeo Danaos et dona ferentis, has been roughly translated as, “beware of Greeks bearing gifts”, becoming a timeless and universal parable for the benefits of skepticism. The sudden abandonment of Greek military volition seemed “too good to be true” and should have raised at least some alarm. The reason, of course, was that the “gift” became the instrument of Troy’s utter devastation and destruction.

In modern monetary times, central banks all around the globe have engaged in psychological warfare against “tail risks.” In financial terms, they are cajoling “markets” to accept a reduction in delta and gamma, disinclination toward theta, all in the hopes of leading to artificial enhancement in vega. The pleasing and soothing rise of asset prices, the gifts of central bank obsession with the Greeks, is an artificial victory in the same sense as what Laocoon experienced. Beware the manipulated Greeks of finance, the modern, financial Trojan Horse.

Over the weekend, the estimable Keynesian Paul Krugman advanced a theory that has been gaining in recent months as a means to explain orthodox economics’ failure while preserving its paradigm. Clearly there has been little economic progress, even now more than 52 months after the Great Recession ended. In the words of likely new Fed Chairman Janet Yellen, the economy still needs “aid.”

The topic of “bubbles” was largely taboo until recently. The Fed acknowledged their existence but they were thought wholly unrelated to anything monetary – just people going crazy. Little thought or attention was spent as to why, or more importantly “how”, irrational exuberance was introduced. In 2013, bubbles are now suddenly being incorporated into the still largely academic discussions.

Krugman’s main point was the epitome of rationalizing failure.

“So you might be tempted to say that monetary policy has consistently been too loose. After all, haven’t low interest rates been encouraging repeated bubbles?

“But as Larry emphasizes, there’s a big problem with the claim that monetary policy has been too loose: where’s the inflation? Where has the overheated economy been visible?

“So how can you reconcile repeated bubbles with an economy showing no sign of inflationary pressures? Summers’s answer is that we may be an economy that needs bubbles just to achieve something near full employment – that in the absence of bubbles the economy has a negative natural rate of interest. And this hasn’t just been true since the 2008 financial crisis; it has arguably been true, although perhaps with increasing severity, since the 1980s.”

According to this bizarre occultist view, the US economy can no longer grow at all without bubbles. Absent a housing or stock bubble, or best, both, there will be no growth.  It is a convenient formulation that can appear in some respects to explain the economic listlessness of the last five years. The inconvenient part, where the argument breaks down, is that inflation has not been hidden – it is the bubbles!

First, we should applaud the step forward that is evident here, namely that economists are finally, FINALLY, coming around to the idea that bubbles have been a consistent part of the economic landscape since the 1980’s. Great “Moderation” was a blatant misnomer in the PR battle to ensure total adherence to monetarism; Greenspan (or any of his followers) was no genius.

However, the correlations here are somewhat backward in Krugman’s (and Larry Summer’s) interpretations. Growth has been largely declining in amplitude (more than obvious in the charts below) the larger the bubbles have gotten – not the other way around. That would seem to suggest, far more intuitively, that bubbles are not the cause of growth but a destroyer of growth. That would invalidate their appeal, and also nullify the mainstream paradigm. 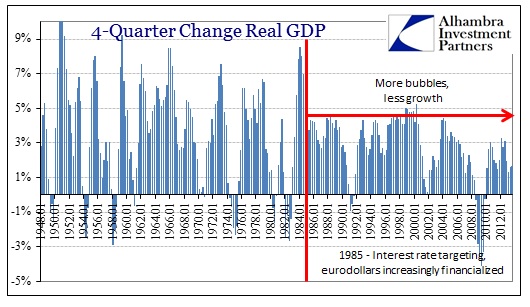 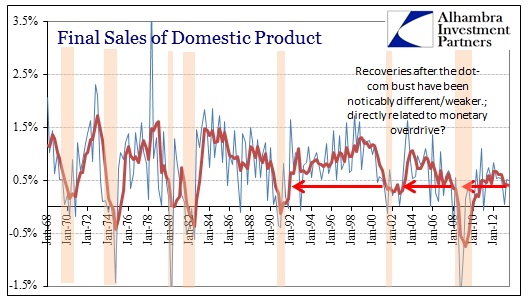 Is it not the slightest bit curious that the US economy was a fountain of innovation and technological productive growth before the 1970’s? The revolutionary innovation that spawned brand new industries, the real source of growth, had its origin in that postwar period; and then abruptly ended. Suddenly, from the 1980’s onward the US economy needed bubbles just to gain any small advance?

In Krugman’s own words, 1985 was a very important year.

“There was a sharp increase in the ratio [debt] after World War II, but from a low base, as families moved to the suburbs and all that. Then there were about 25 years of rough stability, from 1960 to around 1985. After that, however, household debt rose rapidly and inexorably, until the crisis struck.”

We’ve seen the importance of 1985, as well as 1990, repeatedly in analyzing evidence that the economy has been in a continuous bubble pattern, most recently in my examination of eurodollars. Overwrought bank balance sheet expansion, eurodollar and wholesale money, all tie back to the same genesis – money instability created by the fiat standard. The Fed’ mechanical change to interest rate targeting, made possible by monetary “flexibility” provided by going off the gold exchange standard, was a powerful bubble catalyst.

My colleague Joe Calhoun wrote a perfect summation of this, couched in terms of growing inequality.

“What changed? Was there any major macro economic policy that was in place from the end of WW II until the 1970s and then changed dramatically? Was there a change in some major macro economic policy in the 1970s that could have affected equality of income and wealth in such a dramatic fashion? Why did inequality start rising so rapidly even before the election of Ronald Reagan? Why did it start rising before the top tax rates were reduced and before the adoption of freer trade (globalization)? NAFTA wasn’t enacted until the early 1990s long after the rising inequality trend was well established. Did education change that radically in the mid 1970s that it produced this step change in the rate of redistribution up the income and wealth scale? It seems unlikely.”

The monetarist position is redistribution based on inflation. In that respect, the monetarists are very much like the Keynesians – waste is tolerated and even condoned. We must destroy wealth to create wealth? That makes no sense. And so, in a world where wasteful redistribution has become a dominant economic theme, particularly in the decades since the gold standard was ended into a eurodollar standard, it is no surprise that the religious followers of this ideal see the need for nothing but bubbles.

Businesses have no use for bubbles, nor does long-term growth. Monetary stability is the key ingredient, the foundation upon which a healthy economy is based. It really is that simple, no need for convoluted and grandiose theories that insult both basic logic and empirical history.