I have been a pretty consistent and often times harsh critic of the mainstream economic accounts we generally use to gauge the economic system. Any of those critiques are not necessarily directed toward the manner of construction of those statistics, only in how we view them once they are synthesized. That is to say there is nothing really wrong about how the BEA creates its GDP accounts, for example, only in how the mainstream interprets them in this day and age.

It is generally accepted that if GDP is positive then so is the economy; GDP is taken as a proxy and thus we add a correlation relationship. That cannot be an exclusive principle such as those exist in hard sciences because ours is a dynamic world in which we have yet to discover the ways in which the economic system can change and morph – we haven’t even identified all the variables that may have some impacts on the overall outcomes. Despite the obvious dynamic nature of such human systems, this GDP correlation is assumed to be as everlasting as any mathematical “truth” developed by Einstein, Heisenberg or Newton.

Under current GDP accounting (the one that includes more intangibles), the peak of the “cycle” of the Great Recession occurred in the third quarter of 2008 when total GDP was estimated at $14.844 trillion (seasonally adjusted annual rate). The recession was so severe that it took nearly two years for the economy to regain that level. In the second quarter of 2010, GDP stood at $14.879 trillion, and has been growing, anemically but positively, since then. GDP in the latest quarter (before the last quarter of 2013 is announced) was just shy of $17 trillion.

From those figures we assume that the economy is recovering, albeit uncomfortably slow and uneven. If, however, we use the BLS figures on total employment, the analysis sharply diverges. According to the Establishment Survey, peak employment occurred in January 2008 with an estimated 138 million employees in the US. Six full years after that last peak, we have yet to regain that level of employment (136.877 million December 2013). The Household Survey, as it most often does outside of the past fourteen months, mostly concurs with these estimates.

How do we reconcile this obvious divergence? We know it perplexes the orthodoxy because they engage in full-throated defenses over “established rules” such as Okun’s Law and the Beveridge Curve.

It is easy to simply assume productivity, but there is never anything specific offered as to why or, more importantly, how the economy gained so much over this specific time period. All that can be offered as “evidence” is employee fear – that with such high unemployment, structurally so it appears, that employees have suddenly become highly efficient rather than risk potential discharge. As with most fallacies, there is certainly an element of truth contained here. That alone would not (cannot) explain this massive divergence between GDP and employment (more than $2 trillion per year?). On such a scale the only way to gain such productivity is a burst of revolutionary innovation, and even then it would take more time to adopt in order to gain full productive advancement.

The largest single item in the official GDP calculations is called the “imputed rental value of owner-occupied housing.” It is a technical way of saying that the BEA estimates how much homeowners who live in their own homes would pay themselves in rent. This estimate is then included in the “services” segment of personal consumption expenditures (PCE), and it is massive: $1.263 trillion as of 2012’s figures.

The BEA looks upon these homeowners who live in their own homes as unincorporated businesses. Since they are a business they have to have some kind of income, so the BEA assigns them an income of what it estimates a homeowner could potentially get by renting out their house. In other words, they are saying that if you own and live in your home, you actually pay yourself potential rent based on current market conditions.

This sounds especially ridiculous in the theoretical context of what GDP itself is supposed to be, i.e., what is actually produced within an economic system during a specific time period. However, there is a technically sound argument for this imputation. The BEA wants to keep the housing segment of GDP “invariant to how certain activities are carried out.” In terms of owner-occupied rent, the BEA is trying to make sure that GDP is not higher during periods when a larger portion of the population is actually renting homes. Conversely, if there were no imputations made, a dramatic shift into home ownership (such as the housing bubble) would actually shrink GDP without this estimate. Home ownership is economically desirable and consistent with general economic health, so perhaps imputation is not such a bad idea.

There is an “extreme” example that shows exactly what they are trying to accomplish:

Imputations may seem more natural if one imagines the extreme case of an agrarian society where people build their own homes and raise most of their own food; here GDP would be near zero with no imputations.

This is a very effective example. If everyone built their own home, housing-related GDP should be something greater than zero. After all, a good was produced. Similarly, if everyone grew and raised their own food, then food-related GDP should also be greater than zero. So, back in the context of housing, the BEA assigns a dollar value and includes the housing imputations in its calculations of the value of total production.

While I agree that GDP should be something greater than zero, it is not at all clear that that something should be dollars. In the extreme example, it is absolutely true that goods are produced, but the dollar value of those goods is appropriately zero. The BEA takes the meaning of a dollar to be a uniform measure of quantity. But in this extreme example and in the larger context of modern monetary science, producing one’s own house or food should not be valued in dollars at all.

If we view dollars as nothing more than a means of exchange, then producing your own necessities means that you have no use for dollars. Any energy you undertake to furnish yourself with daily needs and wants contributes nothing toward anyone else in society. So what we are truly measuring through dollar terms is the potential ability to exchange productive endeavors. In other words, by using dollars we are really measuring the economic impact of labor specialization.

This is exactly what we have seen during the “Great Recession”. People have eaten out less than they did before 2008. The term “staycation” was coined as a way to describe people entertaining themselves rather than hire someone else for recreation. Ask any tax accountant how business has been and they will tell you that self-preparation has become a threat to their existence. The unemployed no longer need daycare. And on and on. As we do more ourselves, we contribute less toward the ability of others to engage in labor specialization, i.e., employment.

How do we explain the GDP conundrum? Simple, the BEA calculates what it believes the dollar figure of all goods and services traded to be, then calculates what it believes the aggregate changes in price levels are, combines them to get productivity. If you think inflation is less than perhaps it may have been, your estimate of productivity, given this method, will be unusually large. By introducing the dollar as the sole arbiter of “growth”, it also introduces the possibility of error where it is only the dollar that is changing.

If I use another extreme example, this becomes clearer. If, for some unknown reason, a large proportion of the US population suddenly decided to manufacture their own clothing and grow their own food, the US economy would experience a decline in employment (not just in the manufacture of those goods, but in the transportation and supply chains). If the Federal Reserve, as it surely would, responded to such a decline in economic fortune by appealing to inflation psychology, any successful creation of such would appear to increase the dollar value of goods traded, even though the volume of such goods would remain far below.

Further, if the authoritative orthodoxy of assumed proxies and correlations failed to explain this sudden change in behavior, it is likely they would appeal to these mathematical formulations of factors like productivity. Yet, even though they may have been successful at increasing GDP in dollar terms, total employment would not respond, leading to a meaningful divergence between economic estimates of the dollar value of the economy and more “real” estimates of the economy through specialization of labor.

Because we have been conditioned to assume that GDP is the economy, most people resist these alternate translations. Yet there remains a very big and troublesome divergence between GDP and employment that does not comport within the orthodox model. And worse, that is true not only in the US but other national systems like Japan where similar methods have been applied (for a decade and a half). We cannot simply assume that there is an eternal consistency with such proxies and correlations. In social sciences, the can never be anything like that.

More than that, we need to remember that the economy is not really about the dollar value of goods and services, but rather about our individual abilities to survive without having to grow our own food and make our own clothing. Labor specialization, and thus employment, is the goal of any economic system. 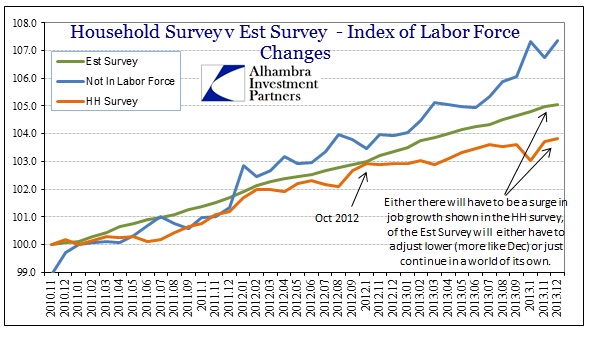 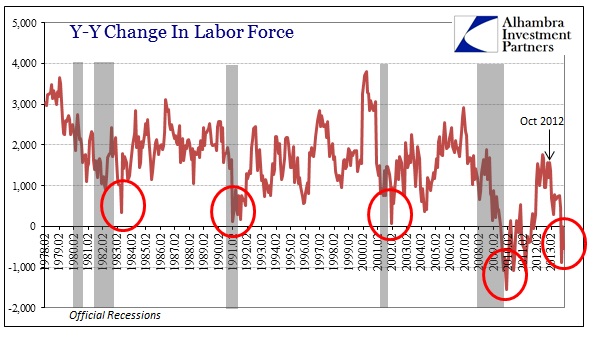