The Year of Leverage

The Year of Leverage

The theme of stock margin debt and its obvious correlation to QE episodes continued into December. Margin debt levels are at record highs, but more importantly investor net worth in the aggregate has finally closed in on the dot-com levels. While just a bit short of the most extreme month of the dot-com mania, margin debt and negative net worth (the difference between margin debt and positive cash balances) are curiously concentrated. 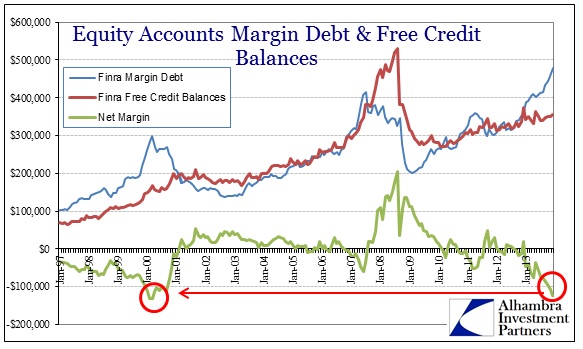 The FINRA figures are combined for both the NYSE and the old NASD. In the days of the dot-com, most of the margin leverage was focused on the NASD – which makes sense since, for the most part, that era’s bubble was centered in the tech sector and the NASDAQ.

In 2013, margin debt and negative net worth are almost exclusive to the Big Board, the NYSE. That would suggest that investors are concentrating leverage not so much on a very broad slice of the market (at least not directly) but rather on ETF’s and other closed funds. That would form an indirect systemic flow of leverage, hidden in the recesses of ETF mechanics. 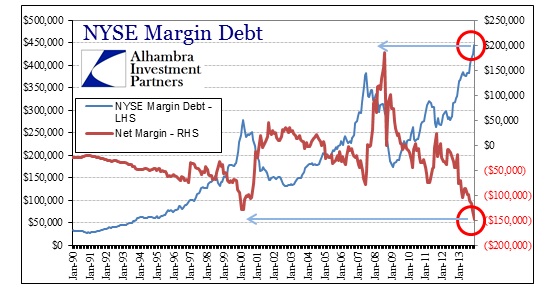 What is also obvious from the margin debt data is that something drastic changed for investor positioning in 2013. As soon as the calendar flipped from 2012, it was as if investors suddenly lost all caution and embraced as much leveraged risk as could possibly be attained. Given that we saw very similar behavior in retailers’ unbridled optimism for any amount of inventory, we can reasonably guess as to a common cause. 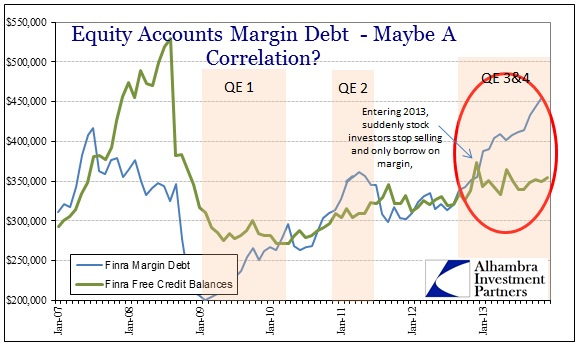 That $142 billion leveraged bet on stocks far surpasses any twelve month period in history. The only times that were even close to as leveraged were the year leading up to June 2007 (-$89 billion) and the twelve months preceding February and March 2000 (-$77 billion). Both of those marked significant tops in the market.

But such a massive deluge in leverage was actually minor in comparison to the other primary debt channel – stock repurchases. In the third quarter of 2013, share repurchases totaled $128.2 billion, the highest level since Q4 2007. For the twelve months ended in September 2013, aggregate share repurchases were an astounding $445.3 billion; the only twelve-month period greater than that total was the calendar year of 2007 and its $589 billion. 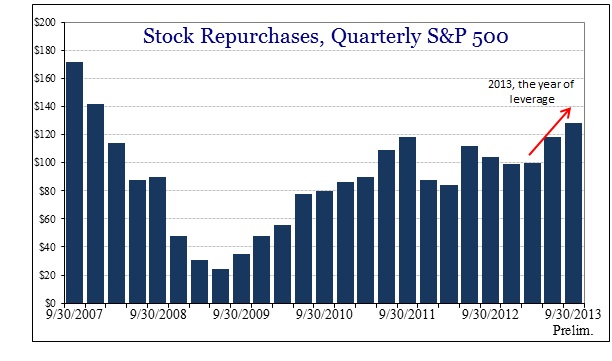 The common argument advanced in favor of such share repurchases is that companies are using cash to recognize undervalued stocks, but that is total hogwash. If that were the case, share repurchase activity would have been overwhelming in 2009, not 2007. In Q2 2009, total share repurchases totaled just $24.2 billion. Further, it is most clear that financial “investment” far outweighs considerations for actual investment in corporate operations, a productive gap that is a leading cause of economic malaise (and eventual suicide).

So we see that corporate managers are no different than the reviled stereotypical retail investor. Both leverage themselves further and further as the market goes higher, not in recognizing undervalued stocks or companies but in full froth of chasing obscene values via rationalizations. History is not linear, but there is certainly a circular rhythm and patterning.

Finally, it pays to ask, given these extreme levels of leverage, are these characteristics of a market set for an extension of a bull run, or are they generally consistent with a market at an extreme? We know what history’s judgment is on that account, so the real factors to consider are; 1. Is this time different? Why? 2. What happens once leverage gets pulled back by margin calls in any non-ideal condition? What will stop the margin cascade, particularly as stocks likely will not be supported by corporate share repurchases during that period?