The main features of conventional wisdom as it pertains to economic measurement always related to two factors: GDP and employment. As I detailed earlier this week, such a regime developed simply because there was a correlation that seemed to be quite durable. GDP and employment, for the most part, moved largely in concert and making economic judgment rather simple and straightforward.

I have noted at length the obvious divergence in the various measures of employment, particularly the Household Survey’s sudden departure in October 2012, but for my purposes here I will stick to the Establishment Survey so as not to introduce any additional variables. Economists right now are convinced that the economy is growing because GDP has moved up above 3% in the past two quarters, and the Establishment Survey averaged nearly 200k jobs per month in 2013.

There is a relatively universal assessment of the economy since the Great Recession that it has been totally substandard, but that has not stopped the process of recalibrating what passes for growth and recovery (indeed, that is largely what is driving it). Where we now hear that 200k jobs per month is indicative of recovery, it was once a level reserved for dangerous slowing. The same can be said of 3% in GDP (though calendar year 2013 GDP was more than a little short of that number).

But even that is not the central theme of this exercise. As I said, even with reduced standards for what passes as growth, these combined figures are taken as positive steps toward the yet-unexperienced full recovery. When compared to previous recoveries, you can see why economists are settling for whatever they can get. 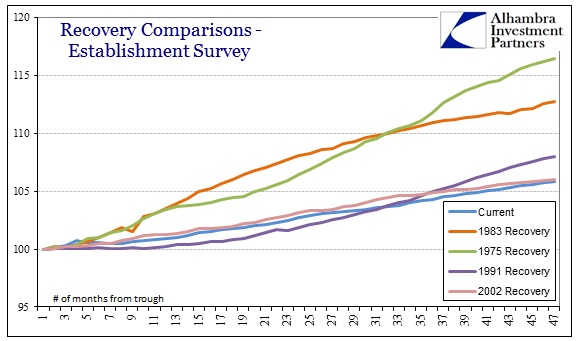 The trajectory in employment for the current “cycle” is very similar to the past two recoveries, and nothing like the two that preceded them. The problem for orthodoxy is that such an outcome violates expectations of the plucking model – the recessions in 1974 and 1982 were severe, as such the recoveries were sharp and strong. That is what is expected by the plucking model, thus the shallower recoveries after the minor recessions in 1990 and 2001 (very, very minor) conform.

If the plucking model is at all valid beyond discrete episodes in history, then there has to be some explanation as to why the current track in both employment and GDP follow the shallow approach rather than the rapid. Given the scale of the dislocation during the Great Recession, the recovery thereafter should have been grouped with 1975 and 1983, if not surpassing both, rather than 1991 and 2002.

But that understates the severity of the mismatch. Measured instead from the previous “cycle” peak rather than trough, this becomes even more obvious. 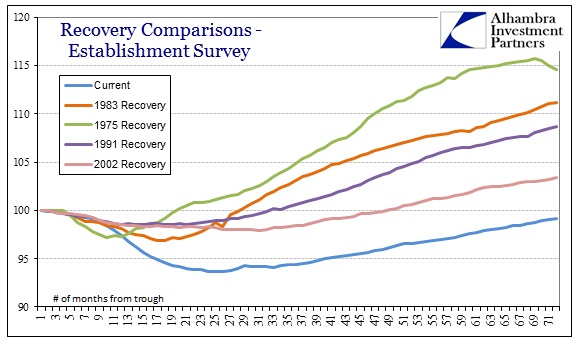 Out of the five most recent recessions, the last in 2008-09 was, by far, the worst. And the economic recovery that occurred thereafter has also been, by far, the worst. That makes a more than compelling case for re-evaluating everything we think we know about recession “cycles”, including the statistics by which they are judged.

If we plot GDP and employment growth for each individual cycle, it is pretty obvious where this expectation for these economic accounts comes from. GDP and employment in most recessions, at least up to the early 1990’s, were very close to each other. There was an obvious correlation that made both mathematical and intuitive sense: if GDP measures economic health at least somewhat accurately, then it stands to reason that our sense of the most important economic variable, employment, would follow closely. 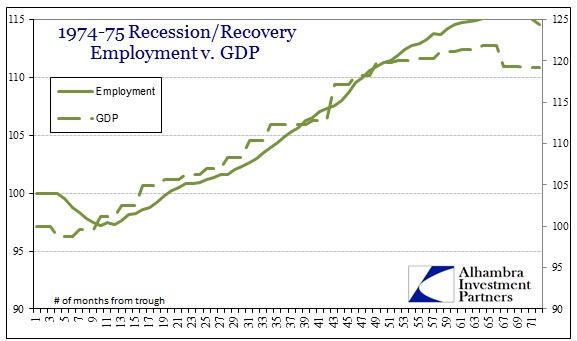 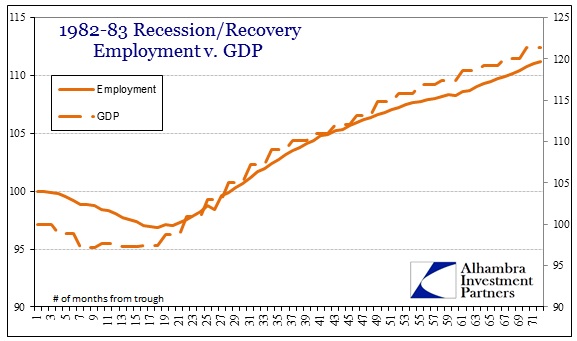 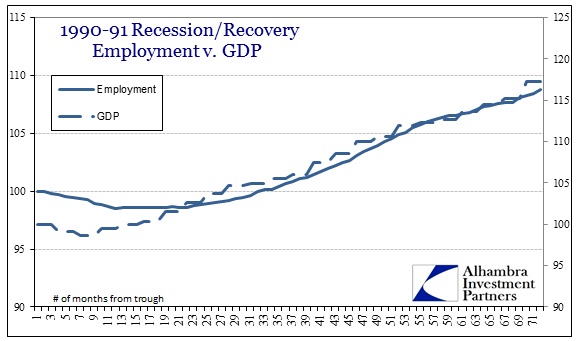 From the comparisons above, that correlation holds without much divergence. GDP and employment appear very thoroughly connected, providing the basis for expectations that GDP is somewhat of a reliable indicator of economic progression.

Something drastic changed with the “cycle” after the 2001 recession, however. Further, it continues into this current “recovery” period. 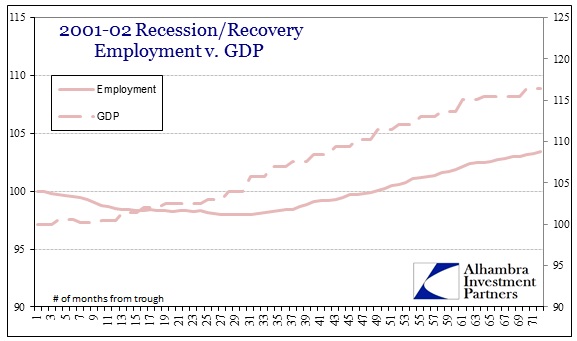 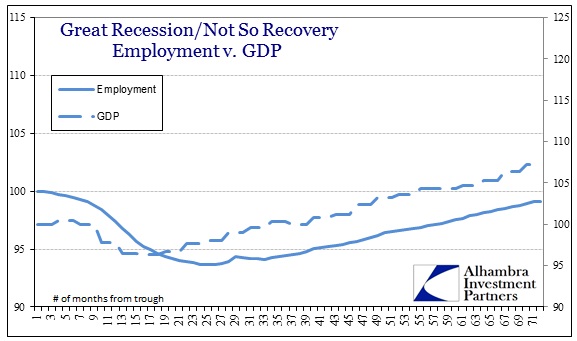 I have used real GDP as the primary measure here, which, I believe, plays a principal role in this divergence. From these five analyzed results it would seem pretty clear that either employment growth was understated during the housing bubble and most recently, or that GDP has been overstated.

Given the lack of wage and earned income growth in the past decade (nearly two) it seems far more plausible for the latter than the former. That would further suggest that perhaps there is a problem with the inflation calculation part of this discrepancy. To get the GDP trajectory to converge upon employment would only require an addition to the estimates of inflation since 2000 (and likely back into the late 1990’s).

That also conforms to what we know about the financial and dollar system in each of these periods. The latter two periods are concurrent with heavy intervention by central banking into the financial system. Both cases are marked with the obvious asset inflation which is fully ignored by the orthodox calculations. It is simply assumed as irrelevant to real economic behavior, but in fact there are innumerable ways in which asset inflation can invade the real economy, depressing activity in much the same manner as consumer inflation. There are changes in behavior and expectations that are not measured by current statistics that play a clear role as a suppressant.

The most readily apparent is corporate preferences toward financial investment rather than productive. The emergence of the stock repurchase mania was a relatively new phenomena taking on gigantic proportions in the years after the dot-com bust (which is itself a proximate cause, as corporate managers were very much interested in getting their share prices up, and then keeping them there as prices went higher and higher). It has only continued after the Great Recession.

There are other such potential depressants related to asset inflation that can be cataloged, like the appeal to a weaker dollar that feeds the desire of businesses to offshore production and the interruption of innovation as resources are diverted toward the financial, but share repurchasing is the most direct in its impacts on employment coming from asset inflation.

Because asset inflation is not incorporated into the measure of GDP, in periods where it is most assertive is exactly where we find this dichotomy between employment and GDP. Modern, orthodox economics posits that such a calculation is near impossible, since it is extremely difficult, so they say, to separate organic growth from intrusive, so it is simply ignored. And as it went unheeded there developed this breakdown in what was a very strong correlation between economic estimates.

The immediate implication is that GDP, with a more inclusive estimate of inflation and all of its nefarious impacts, is being overstated. I don’t think that should be controversial at all, considering the disaster in employment and jobs that has now extended six years from the last cycle peak. That is unprecedented (at least since the Great Depression, and what wonderful correlations and similarities to that period) and, again, should create more reserved judgment about the precision and even usefulness of these measures.

Finally, if GDP is perhaps overstated by way of comparison with the Establishment Survey, then it is well overstated when using the Household Survey as an employment proxy, especially since June of last year. In either case, the health of the economy is in far more doubt than if these figures were more aligned like their historical predecessors. It is problematic enough to proclaim recovery via GDP and employment at reduced rates and standards when they actually agree; it is quite something else when they do not.