No Doubt About Tightening

No Doubt About Tightening

Chairman Bernanke handed off to Chairman Yellen a tapering asset purchase rate, and thus more than a theoretical problem. It is theoretical to the FOMC, but very much real out here where the world actually operates. The QE program instituted in September 2012 with MBS additions to the SOMA balance sheet has created a number of distortions in various pockets of finance, leading to all sorts of hidden policy adjustments. The sum total of these has been the equivalent of a financial trap – where monetary policy could no longer continue at its peak run rate.

In first threatening to taper, credit and funding markets tightened. The FOMC rushed to assure markets that taper was no such thing, and that its policy stance was signaled solely through its own guidance. That amounts to nothing more than wishful thinking as credit and derivatives markets (in particular) positioned leverage based on Bernanke’s original “promise” of Draghi-like unlimited QE. That promise was taken as a measure of intent on banishing “tail risk.”

Re-assessing from a world of exiled “tail risk” to its possible re-introduction is no smooth matter. Even simple math of visible volatility expectations will tell you even the smallest increase in “jump” risk for any model reduces the end quotient by quite a degree, particularly with so much leverage of all forms (from funding and maturity leverage to regulatory leverage). Credit markets are not as enthralled of forward guidance as academics.

I alluded to this yesterday, particularly in mortgages. That is the demand/economy side of the ledger; on the other side lies finance. 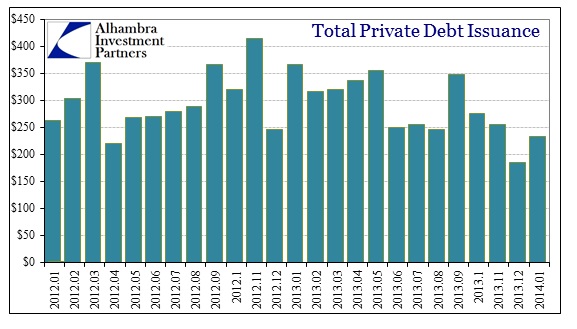 Removing debt securities for both refunding and new issues of governments and their agencies, we see that there has been a noticeable reduction in the issuance rate. The initial decline occurred in June – the dramatic selloff. The effects in mortgage finance have been much more extreme. 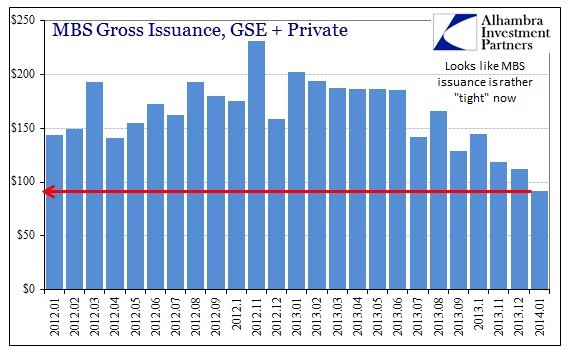 MBS issuance fell below $100 billion in January 2014, the lowest level in years. That bodes ill for expectations of a housing rebound this year.

Corporate issuance has fared better, though there are indeed some signs of slowing. But it is not the overall pace of issuance that should be concerning, as it is the location of that trend. 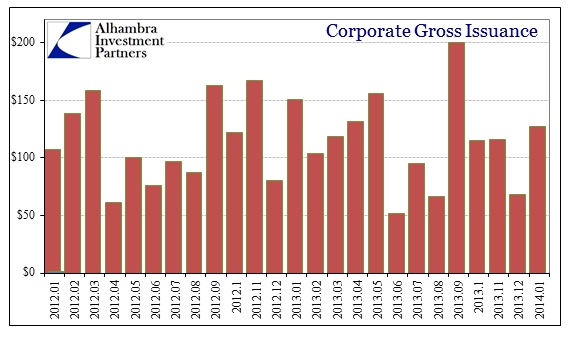 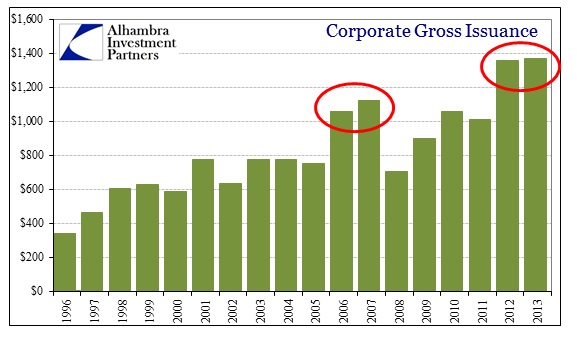 But as the bond market has begun to turn in volume (perhaps) lower quality corporate obligors have found an alternate source. Syndication of loans through banks absolutely soared in 2013, far exceeding 2012 (since these are bank loans they are not included in the above statistics). Leveraged lending, the syndication of lower quality obligor debt equivalent to junk bonds, grew to a total of $605 billion in 2013, a 13% increase over the $535 billion in 2012. That is just new issues and does not include refundings – total leverage loan syndication was $1.14 trillion in 2013, a new record.

That is where the “cov-lite” concerns originate. Leveraged loans are typically highly restrictive toward the obligor’s ability to use cash and borrow elsewhere. That only makes sense given the creditworthiness of the borrower. In 2013, “cov-lite” has been ubiquitous, so much so that it has been referenced in FOMC considerations.

Taken together, it appears pretty conclusive that bond markets are effecting a tightening cycle on credit. However, that is being offset to some degree by banks. In terms of systemic risk, that would mean a huge shift in credit risk to the banking system in the worst credits with reduced quality. Further, that risk is systemic since the loans are syndicated throughout both banks and the alternate asset managers that specialize in them.

This kind of behavior is exactly what you see at the outset of a tightening cycle. The Fed may never have intended as much, but it is increasingly clear the markets increasingly don’t care.