As with Staples, McDonald’s poses the possibility of a competitive aspect to its latest results. February same store sales were down 1.4% in the US leading to a negative 0.3% comp for global same store sales. That followed January where US comparable sales were off 3.3%. Yet again we hear the excuses follow close behind, where weather and “challenging industry dynamics” are used as exclusive explanations. I suppose a deteriorating economy could be encompassed by “challenging industry dynamics” but maybe these CEO’s and CFO’s are tired of blaming the lack of recovery and have secured a more pliable buzzword catchphrase (Staples used almost the exact same wording).

Mainstream observers have certainly latched hard onto the cold. However, the chronology of McDonald’s US sales doesn’t lend itself so easily to the Polar Vortex version. 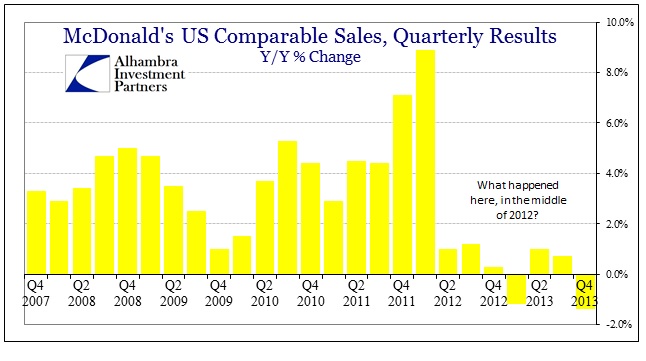 Out of “nowhere” US sales suddenly tumble in the second quarter of 2012. That’s even more suspicious given the unfavorable comparison with 2008-09. McDonald’s has fared even worse since the middle of 2012 than it did during the whole of the Great Recession.

While some might note various temperature correlations and assume causation, there are much simpler explanations that conform to Occam’s Razor. McDonald’s fared relatively favorably, but still experiencing some weakness, during the heavy recession in 2008-09 because credit-bust Americans shifted preferences from premium restaurant “experiences” to cheap food. That even cheap food is now avoided, and has been for more than a year and a half, demonstrates not recovery but further erosion.

While there is the perpetual battle among the burger chains, it’s not as if Burger King, McDonald’s prime competitor, has been stealing sales with its refurbishment plans. Burger King’s results offer limited usefulness, however, given its recent history – sold and privatized in 2010 to 3G, then returned public in 2012 to JUSH. Burger King also has a much greater proportion of franchised stores vs. McDonald’s, so its corporate results may not be a good representation across its franchise base, and thus offering only a limited proxy of US consumers’ propensity and ability to purchase at the bottom end. 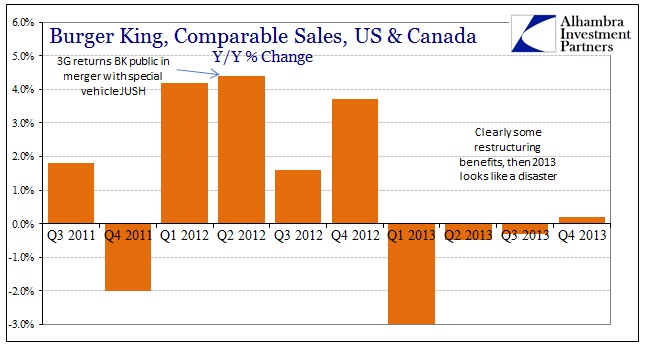 Despite all those caveats, we essentially see the same pattern here with Burger King. The timing is a bit off in that the cliff was not reached for BK until the beginning of 2013, but not so far as to be contradictory in the slightest. If anything, it certainly appears to me that fastfood sales are not flowing from one to the other, but rather suffering the same macro devolvement as in so many other bellwethers.

It is high bias to resort to using weather and temperature to explain more recent indications such as these. And it is intentional since that explanation stops short, well short, of incorporating comprehensive factors that go back more than a few months. It simply cannot be weather that is driving McDonald’s to appeal to “challenging industry dynamics” for almost two full years.

This pattern, the 2012 cliff followed by a stubborn resistance to rebound, is evident everywhere yet only these illogical assertions get offered in the desperate scramble to maintain that orthodox economics has not utterly failed. If you focus only on the past few months maybe you don’t notice the past few years? ZIRP/QE was always an absurd proposition to begin with, and now we have broad and widening proof of its real efficacy – impoverishment. 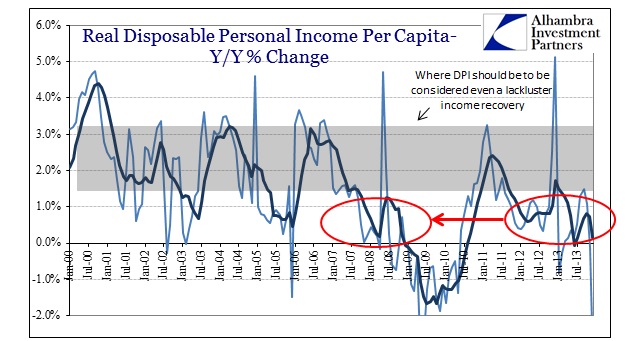