According to Jon Hilsenrath at the Wall Street Journal, the FOMC is starting to use the ephemeral idea of “headwinds” to argue in favor of persistent monetary intrusion. He offered several examples, most of which sound like this:

New York Fed president William Dudley said in an interview with the Wall Street Journal this month that “persistent headwinds” to growth explained why the economy would be unable to bear much higher interest rates in the years ahead.

Given the stakes here, you would think it somewhat vital for someone, somewhere in the Federal Reserve apparatus to actually and concisely define these “headwinds.” But that curiously never happens. However, anyone who pays a small amount of attention to the inner workings of mathematical modeling in econometrics knows the game here, semantics and all. Headwinds are nothing more than the economy doing something other than modeled. It should be more concerning that this divergence between modeled expectations and actual results (or what we call science; i.e., observations) only exists on the downside – it has not been the case where the economy performs better, or “tailwinds”, than expected, meaning the whole analogy is just a clumsy PR attempt at circumventing retribution.

Go back and review the predictive capabilities of the Fed, indeed all mainstream economists, and you find a great deal of optimism that is eventually unrequited by reality. That leaves but two choices – throw the models out entirely or resort to this non-specific mysticism.

We know they are not going to do the former without being forced by political will. If ever there was an opportunity to do so, it would have been after the panic in 2008 since the models were leading FOMC officials to doubt their own eyes and intuitions. They even quantified the failure in their math and statistics in a paper that should be pinned to the top of every webpage in the entirety of the Federal Reserve’s sprawling website, including all 12 branches – if not the whole of the paper, at least Table 2 on Page 38 (Table 2 shows how each of the various models, including ferbus, predicted in early 2008 that a sustained Zero Lower Bound event was mostly a triviality, and at best a one in eight chance; Table 2 also shows how that predictive capacity was “increased” by re-simulating statistical probabilities incorporating new data through 2010, and the results are, comically, just as bad).

In Mr. Hilsenrath’s telling, these FOMC “doves” are seeing an economy moving in the “right” direction but still encompassed within financial difficulties remnant to 2008. Or, as he put it, the economy is “just getting to something a little less vulnerable.”

So if we move beyond the ephemeral and unspecific headwinds to something more approaching empirical reality, we should be able to spot “a little less vulnerable.” Since monetary policy’s most fervent channel lies through mortgage finance, that should conform to this idea of slow economic mending. Unfortunately, mortgage issuance is off nearly 60% in less than a year since the word taper entered the mainstream, ironically through Hilsenrath’s column, do in full part to mortgage demand (applications) totally collapsing. Again, as I have mentioned before, there is something very wrong when a relatively small increase in mortgage rates leads to such a dramatic decline – that incongruence speaks not to “mending” but persistent vulnerability.

In point of fact, this continued weakness is nothing more than reflation and bubbles. The point of QE (particularly the second episode and forward) was reflation itself, but rather than create the virtuous circle of a healthy economy, the economy can only countenance increased fragility. While the FOMC exerts itself in the search of some aggregate demand concept, the real economy suffers (headwinds) intrusions leading to massive, and thus fragile, misallocations. Mortgage finance is just one aspect.

This bubble obsession feeds further into the real economy, most obvious in real estate and construction. The “rebound” in 2012 and 2013 was unarguably spectacular, but that itself was not appropriate. Following so close after such a massive bust, is another bubble really the best course to find “tailwinds”? That would only make sense if you concern yourself with the very short run, ignoring the building of negative intermediate and longer term factors.

Instead of an economic rebirth that is suitable for a real recovery, we get this instead: 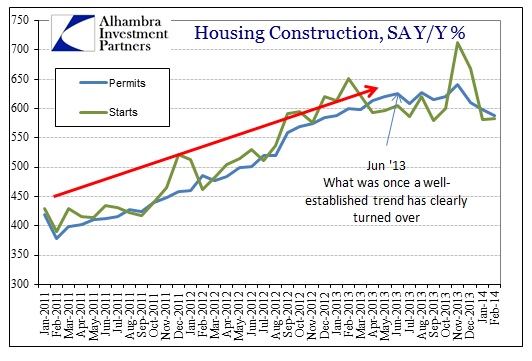 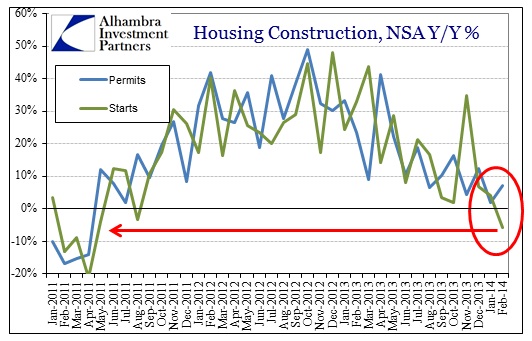 And even the chart above understates the deepening misallocation problem because volatility in the multi-family (apartments) construction segment took some of the “slack.” Broken down by segment (below), the construction of single family dwellings is now shrinking at a pace like that of mid-2011. 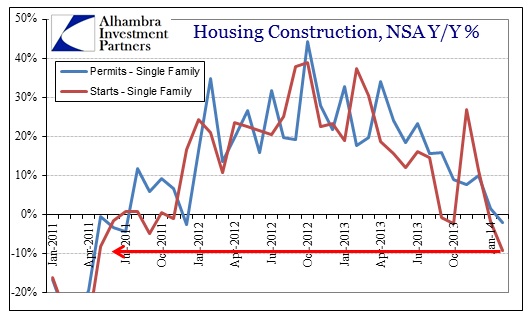 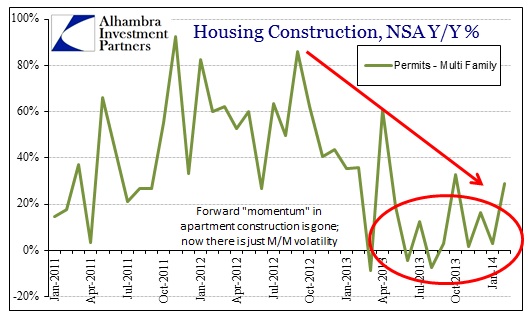 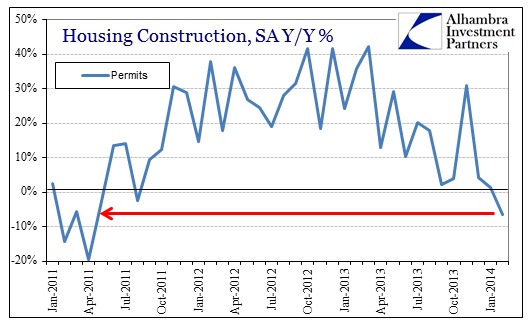 Real estate construction has a macro component to it that has already seen some reversal in the GDP figures (a tailwind turning headwind, as it were). It looks like that is deepening still further, but more importantly, there is the looming possibility of a second, albeit smaller, housing bust forming in such close proximity to the first.

Headwinds are not some exogenous factor, they are monetarism put into practice.