This Time They Think They Mean It

This Time They Think They Mean It

There was nothing surprising in Federal Reserve Chairman Janet Yellen’s press conference yesterday. While some “investors” may have been shocked about where policy was headed, some parts of the credit markets have been anticipating this course right along (more on that later). Whatever may be expectations for QE and “forward guidance”, the FOMC is using the unemployment rate to provide its basis for disguising the fact that they have little choice here.

The theme throughout the event was the same as it has been since the first conference initiated by former Chairman Bernanke back in April 2011 – the economy is getting better. As I mentioned a few days ago, the FOMC views rising inflation as complimentary to, and even reinforcing, a strengthening economy. As Yellen said in her prepared remarks,

Meanwhile, as I noted, FOMC participants continue to see inflation moving only gradually back toward 2 percent over time as the economy expands. The central tendency of the inflation projections is 1.5 percent to 1.6 percent in 2014, rising to 1.7 percent and 2.0 percent in 2016.

The basis for that expectation was her assertion that the central tendency for growth was on a firming trend. They expect 2.8% to 3.0% GDP growth in 2014, and “somewhat above that” for the remainder through 2016.

Looking ahead, Committee participants expect a moderate recovery to continue through 2011, with some acceleration of growth projected for 2012 and 2013. Specifically, as the table shows, participants’ projections for output growth have a central tendency of 3.1 to 3.3 percent for this year, but rise to 3.5 to 4.2 percent in 2012 and about the same in 2013. These projections are a little below those made by the Committee in January; the markdown of growth in 2011 in particular reflects the somewhat slower-than-anticipated pace of growth in the first quarter.

As we know, of course, GDP did not accelerate as anticipated, rather declining to a rate less than half of those projections. Worse, almost 40% of that “growth” was created by as-yet unrequited inventory stocking. 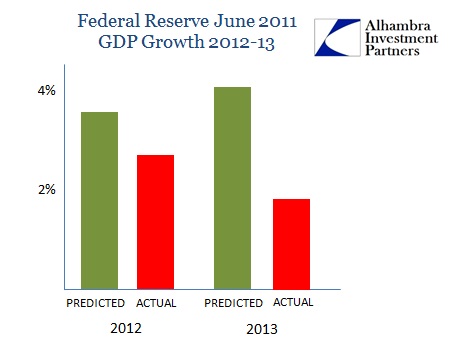 As for inflation, Bernanke expected:

They captured the balance of 2011 in their “central tendency” predictions, but missed noticeably on the downside about where inflation would “anchor” throughout 2013.

The inflation measure the FOMC uses as its primary estimate is the PCE deflator (shown above). In the latest quarterly calculation, the PCE deflator was running at just less than 1% Y/Y. In other words, inflation, using their preferred means, is thought to be less than half of the target, and significantly below that 2011 assessment of “central tendency.”

Using monthly estimates of the core PCE deflator, we can see that this measure of inflation shows the opposite of the trend specified by both Bernanke and Yellen. The trend is clearly lower, which demonstrates enough on its own about both predictive abilities of Fed models and the co-relationship with the growth trajectory. The FOMC simply assumes that inflation will bounce higher for some unstated reason, except in the desperate hope that growth finally appears as anticipated for all these years now. 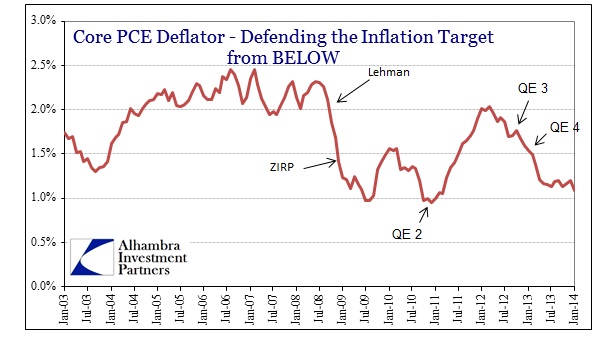 As for tapering QE, Yellen issued the standard boilerplate but that doesn’t dismiss it as central to the philosophical foundation guiding policy and all these predictions (and also why they never seem to turn out).

These sizable and still increasing holdings will continue to put downward pressure on longer‐term interest rates, support mortgage markets, and make financial conditions more accommodative, helping to support job creation and a return of inflation to the committee’s objective.

I’m not sure if she was self-conscious in saying these words out loud, but it is difficult to reconcile that sentiment with reality. That encompasses not only the inflation/growth trajectories I cite above, but also the credit market conditions of the past nine months. I don’t know how anyone could characterize anything of that period as being consistent with “support mortgage markets.” A more proper formulation would incorporate the collapse in mortgages as revealing misallocation created by all these monetary distortions – and thus also revealing both the consequences and causes of missing inflation and growth on the downside. 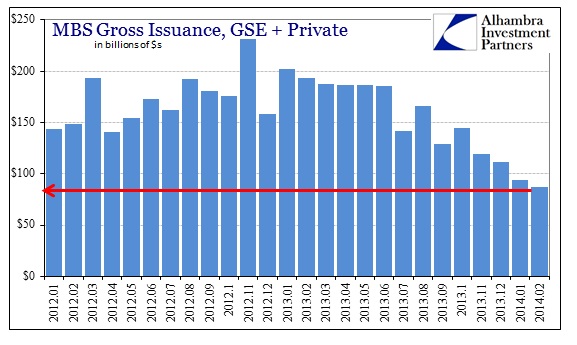 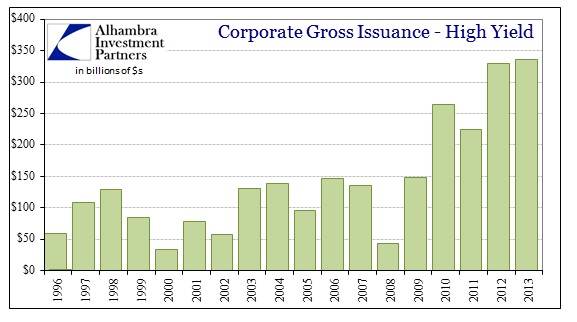 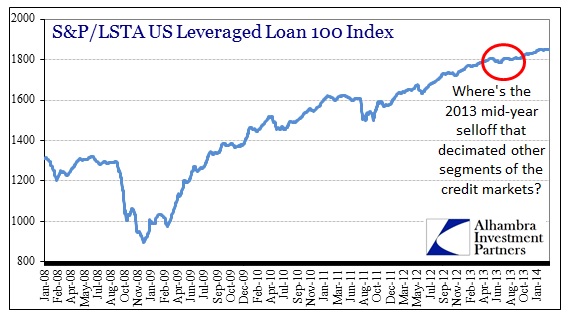 The three charts immediately above speak more about taper than anything of inflation or GDP growth. The FOMC is very much aware of this massive misallocation (even going so far as to refer to some of these distortions in the highly sanitized minutes of previous meetings) and specifically mortgage collateral consequences. Taken together, the distortions above and the repo collapse below put the FOMC, I believe, into taper regardless of how the actual economy is functioning today. 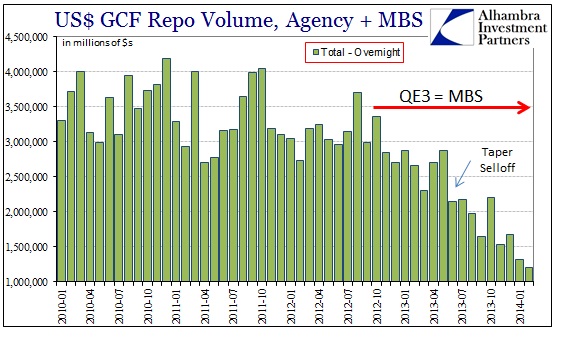 While I sincerely doubt it was Yellen’s intent to “spook” markets with her clumsy six-month reference, that is the only course the FOMC can declare at this point. They have to make “markets” buy the premise that the economy is actually taking the positive track, and that this time is different than all the previous predictions of exactly the same. The only way to do that is to “normalize” policy and hope that it works (this is all psychology, after all), despite all the broad, current evidence to the contrary. Otherwise, Yellen and the policy committee would be left admitting that what we see now is nothing like what they had in mind for withdrawing “support.”