There was not much new to report in today’s durable goods estimates, consisting of largely the same we have seen since mid-2012. But that in and of itself is noteworthy, particularly as other indications point to similar patterns and analysis. In the past this has been called “scraping along the bottom”, but if recent history is any guide then it may be more appropriately defined as “confused stasis.” 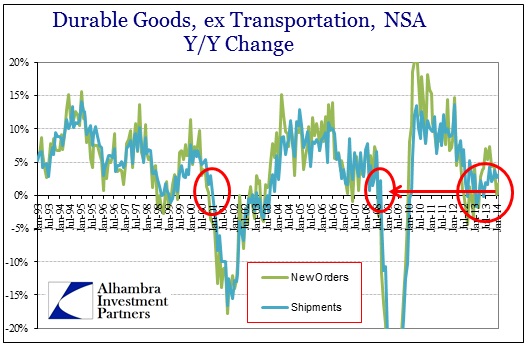 While we see that both orders and shipments are running at the same low levels (up only slightly from January’s negative Y/Y comps), it is the overall trends and patterns that are notable here. Further, this trend is visible in both overall durable goods (ex volatile transportation) and capital goods (ex aircraft and defense). 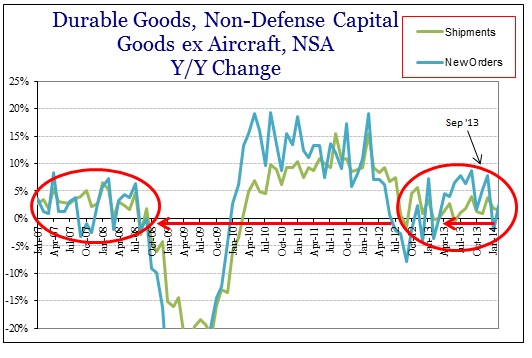 In looking at these from a wide and broad perspective, I cannot help but see similarities in the charts above and the one immediately below (particularly the marked section). 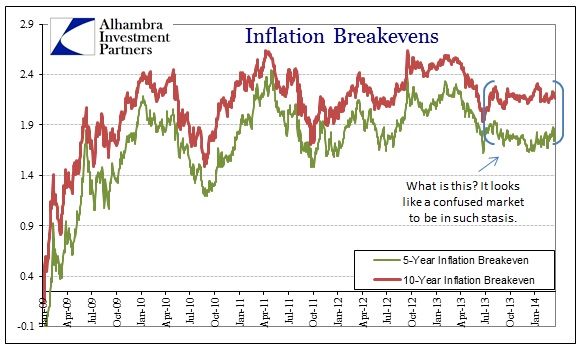 In the period leading up to the collapse portion of the Great Recession (which includes the first phase up to October 2008) we see exactly the same kind of behavior that we see now. When I say exact, I mean exact to the point of such eeriness that I had to double-check the data. 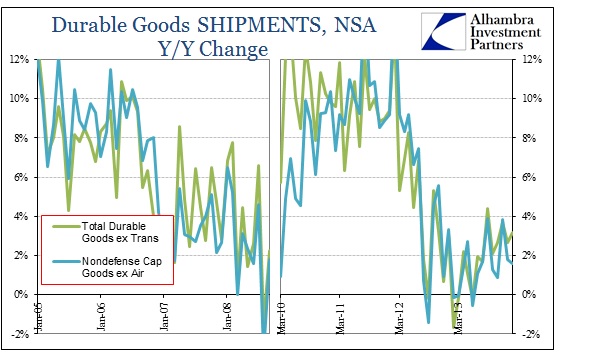 It may not be fully apparent in the side-by-side comparison above, but when you break down the behavior of both recovery/recession periods the striking similarities become more than obvious. The dot-com recovery (housing bubble) hit its max “stride” in November 2004 (growth was accelerating to that point). From there until July 2006, growth was high and steady – exactly what you would expect in a recovery or growth period. As the housing bubble past its apex, durable goods and business investment activity (cap goods) sharply decelerated into early 2007, March to be exact. From that point forward, until the ultimate collapse in October 2008, the economy (as represented here in durable and capital goods) took on an almost zombie-like state.

As implausible as that may sound, it has happened again in almost exactly the same manner since early 2010. The upward swing after the collapse portion of the Great Recession hit its “stride” in April 2010. There was again steady growth until February 2012 when activity suddenly and swiftly fell. After that deceleration, the economy has again taken on this strange stasis that, once again, looks like “scraping along the bottom.” 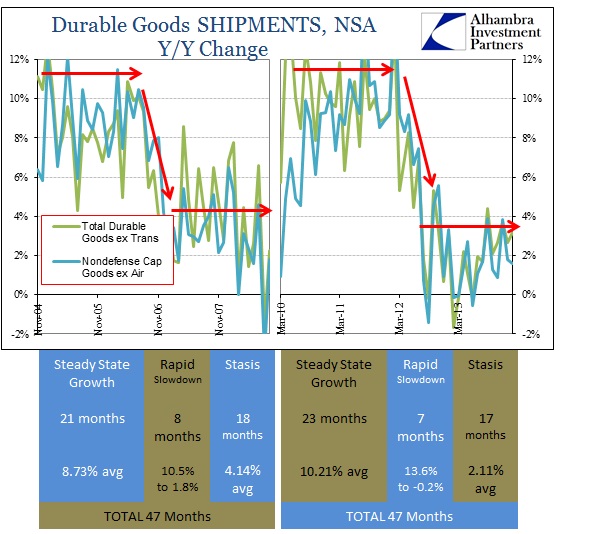 As you can see in the comparisons above, the time periods involved in each subsegment match almost to the month. One note before moving forward, none of this suggests a recurrence of the collapse portion of the Great Recession, particularly given the unique set of circumstance that existed then (financial). However, given the recent behavior in inflation expectations in the credit markets we can begin to theorize what may turn out to be a singular source or causation.

Regarding those inflation expectations, the peculiarity there is of a similar kind of stasis that is generally not something you would expect of a vibrant and moving “market.” Yet, the low volatility in inflation breakevens more than suggests that participants are wary to move heavily in one direction or the other. I surmised that the reasons for that was the very evident dichotomy created by expectations of monetary policy – on the one hand, inflation is clearly falling in every measure available; on the other, the FOMC still holds great sway (unfortunately) and continues to proclaim slightly accelerating inflation ahead. The “market” thus holds steady in between those two polar opposites, not yet ready to ditch one to embrace the other.

In one sense, that means credit participants see the actual behavior in inflation and thus are acting out of caution rather than fully embracing the Fed’s proclamations. I think, ultimately, that is exactly what is transpiring in the goods economy. These economic agents are very much aware of the rapid decelerations that took place in each respective period. In the “stasis” periods that followed the slowdowns, monetary policy took on a drastically more “accommodative” tone. In 2007, it was the initial and heavy rate cuts along with other financial measures aimed toward improving systemic liquidity. In 2012, there was QE3 (MBS) followed closely by QE4 (UST).

Like inflation expectations, these business agents are/were faced with the same dichotomy – monetary policy-driven expectations for a more robust future based solely on monetary policy. Yet, contradicting that narrative, businesses could not help but factor their own fortunes as they are (were). What follows(ed) is (was) a kind of extremely cautious optimism, where businesses largely commit to neither (in the aggregate).

We know that individual business predictions for the future have a partial basis in both elements. Their current levels of activity form the backbone of orders and plans for future expectations, but that is also penetrated by mainstream, orthodox predictions. SO where a producer of durable goods will use the current order or shipment level as the basis, most businesses of any size will also incorporate some kind of economic survey or model into that baseline forecast (the Blue Chip Economic Indicators is one such mainstream “tool”). That means companies internalize (to varying degrees) the very same assumptions as those used by policymakers. That includes this faith that growth will increase simply because the Fed did “something.”

When the FOMC said in late 2007 that financial “irregularities” were contained and would only cut 1-2% off GDP in 2008, most everyone believed it or some close version. When Bernanke’s optimism showed in May 2008 (remember 2nd quarter 2008 GDP was a sudden positive number, seemingly confirming his interpretation) it’s not difficult to assume that was taken as a major factor in setting business planning. And the FOMC kept right on cutting rates and providing “stimulus”, so there was also this monetary “appeal” that, based on faith in orthodox economics, some plausibility remained in those assertions of optimism. Yet, for all those reassurances, actual growth conditions never did improve.

What are businesses to do when these forecasts and assurances obviously conflict with their own experience? I think you end up with exactly this sort of confused stasis where participants and agents, like in credit and inflation, make no significant moves in one direction or the other – yet, given that, they are still anchored by current levels of activity. Recency bias extends here into this willingness to suspend observation, if only partially, and at least moderately embrace the idea that it can’t get worse because that’s what “the best and brightest” of “experts” say on TV. The similarities between 2007-08 and 2012-13 are evidence toward that idea – the “liquidity” avenues and measures in the earlier period, and QE 3 & 4 in 2012.

This apparent stasis holds up until something forces a break. In 2008, financial panic acted as a classic “shock” which severely depressed anything and everything (although it was not “unexpected” if you retained objective observations). Perhaps that holds hope for 2014 in that a positive shock may be theoretically possible to force a break to the upside. Given the bubble state of assets and the depressant state found in a broad cross-section of other economic factors I find that very unlikely; just as the idea of monetary influence or control is rendered derisory by empiricism. In fact, the only positive shock I can think of is a sudden and permanent end to all this monetary-driven confusion.