Recently there has been a slight increase in interest over the money supply figures, particularly M1; nothing too major but some perceptible chatter. Going back in the weekly data, you find that the growth rate suddenly jumps in early February. For anyone searching for inflation, which includes practically the whole of the orthodoxy, this might seem like a sign of a pickup. Extrapolating that further, it might then suggest the recovery narrative has some empirical backing.

But whatever sense one might want to make of money supply figures, there is one real certainty, namely that they have no bearing whatsoever on any economic factor. The M’s are an anachronism to a system that no longer exists, yet they are still quoted as gospel in rather shocking regularity – including determined usage by some of the FOMC members themselves. I can’t think of a more damning indictment of that body than being four decades behind the times.

I did not choose the approximate timing, four decades, of that impeachment idly. You can trace official records back into the 1970’s speaking about this very subject. In the December 1974 FOMC meeting “summary” (transcribed versions of what was being said in detail), Charles Coombs, then the System Manager for the Open Market Account, was quoted making the following suggestion:

The volume of funds which might be shifted back and forth between the of the monetary statistics arose in connection with Euro-dollars; [Coombs] suspected that at least some part of the Euro-dollar-based money supply should be included in the U.S. money supply. More generally, he thought M1 was becoming increasingly obsolete as a monetary indicator. The Committee should be focusing more on M2, and it should be moving toward some new version of M3—especially because of the participation of nonbank thrift institutions in money transfer activities should be included in the U.S. money supply.

The reference to “Euro-dollars” there and the growing obsolescence of M1 are more than related. The entire banking and monetary system was at that moment in the process of radical overhaul, not the least of which was related to the end of dollar convertibility. The eurodollar market’s replacement of the global gold exchange standard presented more than a few problems in trying to gain a monetary understanding of what was really taking place. This lack of understanding was a significant cause of the second phase of the Great Inflation itself.

The complications of eurodollars were really related to the growing usage, acceptance and even reliance on ledger “money”, as directly opposed to physical currency. The eurodollar market’s growth was significantly boosted for that very fact – banks were not “burdened” by limitations of physical currency, only by accounting balances. They could simply move numbers between general bank ledgers (clearing almost on an ad hoc basis). But in such a system, what counts as the money supply?

That was all further complicated by another radical financial “innovation.” In February 1970, Ginnie Mae, with assistance from HUD, issued the first mortgage “security”, dawning the wholesale/derivative nexus that would form the backbone of the shadow system in the decades that followed. Those developments took on new precedence in the 1980’s, merging somewhat as the eurodollar futures market gained wide acceptance in 1985, with concurrent volume in interest rate swap trading. Again, what constitutes the money supply?

We do know for certain that the Fed removed its money supply targets (M2 by then) sometime in the 1980’s, though we don’t know exactly when that took place. We do know why that shift in emphasis occurred, as they rightly noted that even M2 had seen a diminishing correlation with economic factors. In its place, the Fed began targeting the federal funds rate, an acknowledgement of both the receding relevance of the older M’s and a nod to how the system was developing toward wholesale reliance (the deposit model of banking was surpassed in that decade). As if that needed further confirmation, the Fed came up with M3 which attempted to track broad “money” growth, including eurodollars and repos.

There was never more than a passing attempt at M3, not because the FOMC wanted to “hide” their inflation fingerprints, but that it was never a reliable measure to begin with. The best information about repos and eurodollars was always limited because most of those relationships (or ledger money deals) were almost exclusively bespoke and OTC – no real-time centralized audit trail. By November 2005, the Fed simply acknowledged that its publication of M3 was beyond flawed, and that it would cost far too much to continue its estimation and construction.

Again, there were protests and suggestions that the Fed was trying to remove evidence. Instead of seeing conspiracy, critics should have seen the problem for what it was – nobody anywhere had the slightest idea of what the actual “money” supply really was at any given time. That applied equally to estimates of potential growth rates as well as to the very definition of money itself.

I wrote about this a little over a year ago, essentially highlighting this extremely important aspect to the modern monetary system:

We know that the Fed was on to something about the difficulty in quantifying repos and eurodollars because we still have no idea today how much “money” appears out of nowhere due to repos and eurodollars. The Bank for International Settlements (BIS) essentially corroborated that in one of its attempts at analyzing the 2008 crash in an October 2009 Working Paper, The US Dollar Shortage in Global Banking and the International Policy Response. Independently, the BIS was interested in figuring out how many eurodollars there were at the time to gauge what was essentially the “crowded trade” of the century (to date, anyway) – the shortage of US dollars in the eurodollar market created largely by European banks engaged in multi-national shadow banking.

The BIS could not come up with an answer; not for lack of trying.

The Bank for International Settlements could not even estimate one segment, admittedly a large one, of the eurodollar market (incidentally, their range of estimates for the “dollar funding gap”, what could rightly be called one aspect of “dollar” supply, was something between $2 trillion and $6.5 trillion). That was an important study not just for academic reasons, but because the eurodollar market, originally thought to be limited to replacing gold as an international trade/reserve mechanism, had by 1985 (no coincidence that date; see above) begun to “leak” back to US domestic credit. The housing bubble was built on the eurodollar market, something that is completely missed by M1, M2 and even M3.

If you run a simple regression between annual M1 growth and annual GDP growth, the correlation coefficient is about 0; the Pearson coefficient is -.07. Just viewing M1 on a graph shows how little resemblance there is to any economic patterns. 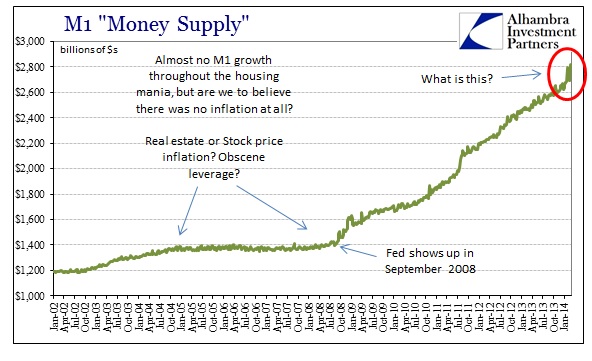 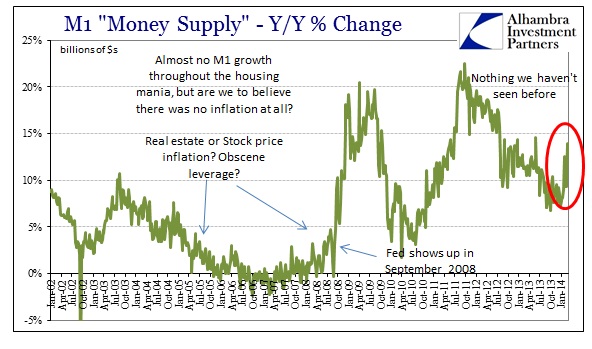 What M1 really shows is obvious policy changes by the Fed, largely QE. What it does not tell us is anything about the real economy, or even the financial economy. The simple fact of this modern money system is that banks do not need such money “supply” to make loans or even buy securities. That was the “freedom” presented by this evolution – namely that banks do not have to wait for money to show up to do what they will. A bank makes its move first, and then finds a liability to match afterward. Money supply is irrelevant – the primary factors now are capital ratios and risk management “math.”

That should present a mortal challenge to economists still reliant on these outdated money supply figures and concepts, but it does not seem to bother them in the least. The M’s still get quoted as if they convey something significant. Rather than focusing on the past, we should instead be far more attentive to the problems expressed by this supply conundrum. If we can’t even define what constitutes “money”, how can anyone reasonably expect reasonable control over not just money and banking, but all finance and the economy?

We have little idea of what the money supply is at regular intervals, let alone in anything approaching real time. The BIS estimations of the dollar shortage were taken largely from public and regulatory filings of the individual banks themselves. Anyone who has at least casually followed bank filings knows that these are simply window-dressed numbers. What banks do in the interim between filings is not ever known individually, certainly never in the aggregate. At best there are third hand glimpses (repo fails or term currency swap rates) into what is really taking place behind the scenes…

The BIS estimates that at the end of H1 2012 there were $68.6 trillion in gross notional forex derivatives. Not all of these are funded US dollar positions, they only use the US dollar figure as a standard of measure across all currencies – ironic, given the context here, that the reserve currency would fill this monetary role (standard of measure) in such an abstruse fashion of derivations. Of that $68.6 trillion, $24 trillion consists of currency swaps.

We have massive and unseen markets of trillions of “dollars” of ledger accounting adjustments that simply transfer digits from one perception (in a computer system) to another, and still policymakers deign to be able to control it all enough to make sure this supply of “dollars” makes an immediate, direct, and positive impact in the domestic economy. Are we supposed to believe that a multi-billion “dollar” cross currency basis swap between Unicredit and Citigroup, for example, funded by the Fed’s attention to the “money” supply, is going to put someone other than a trader to work? In that cross currency basis swap an exchange of “currency” (nothing more than ledger money moving between computerized accounting software) links the arrangement to both individual liquidity perceptions and general banking conditions (for both liquidity and creditworthiness). The Fed has no more control over where “money” ends up as it does over directing the economy as a full-blown central planner. It tries to play the role of central planner but has no actual authority or ability to direct channels of monetary flow; in the end it ends up as a confused mess.

By all means, try to find something meaningful out of that.