Mortgage rates have swung back to a 2-month high, a unfortunate concurrent timing to Janet Yellen’s recent assurance that the FOMC remains in full support of the mortgage market. Taper is not tightening to her, so the 53% decline in the monthly issuance of MBS and agency securities in February against May 2013 (before the taper word was released) must be some kind of newly discovered form of market care and sustenance.

That would offer the only explanation for this ironically appropriate headline from Business Insider, Pending Home Sales Unexpectedly Drop. Yellen stated outright that the Fed supported real estate through its various and unspecified “scientific” mysticisms, so it must be so. If that wasn’t drilled far enough into the orthodox bedrock, another article on mortgage rates, this from Bloomberg, quotes the obligatory credentialed economist to provide color to this “unexpected.”

“The housing numbers have been really disappointing,” Patrick Newport, an economist with IHS Global Insight in Lexington, Massachusetts, said in a telephone interview yesterday. “Most people were expecting stronger pickup in housing this year that would lift the economy into a stronger growth pattern, and that isn’t happening.”

For the record, pending home sales, according to the NAR, fell 10.2% Y/Y in February. That was such a large decline that the compulsory reference to snow and cold was toned way down to just a passing anecdote. To accomplish this dastardly feat, the average mortgage rate (according to Freddie Mac) has risen a grand total of 83 bps. It was 3.57% in February 2013 and rests now at 4.40%.

I say again, this is a bright and flashing warning sign of a “market” so extremely fragile that a slight increase in rates produces such magnified and incongruous downstream results. That echoes not only fragility but backwardly-driven misallocation to a momentous degree. If you asked economists (I know) in February 2013 what it might take to depress mortgage issuance by 53% and home sales by 10% Y/Y, I highly doubt their answer would have been anywhere close to 83 bps. 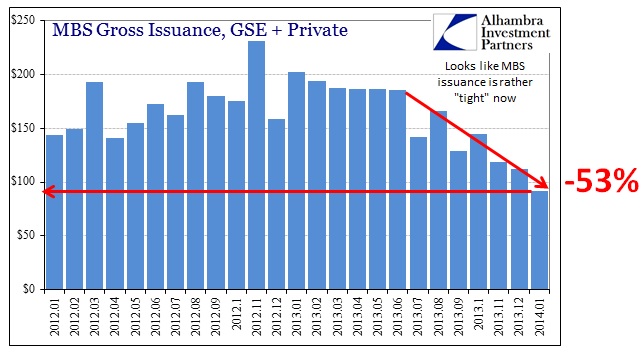 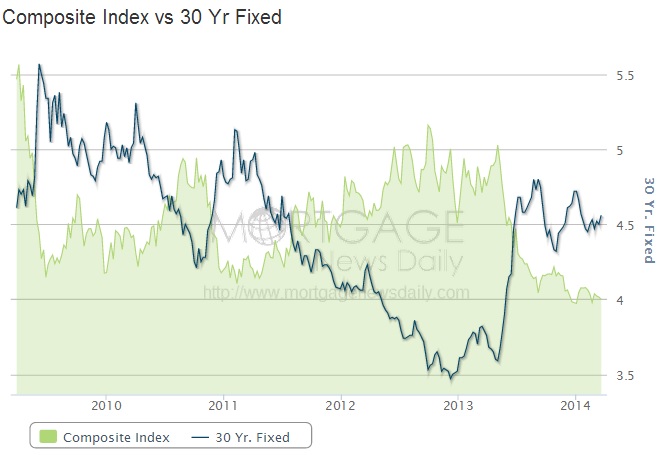 The reason for that is as simple as Yellen’s major message – they all actually incorporate the idea that the Fed is indeed supporting the mortgage and housing markets. Where it falls apart is the conspicuous incuriosity of exactly how that might take shape and form. Economists simply assume it as a matter of faith, and then are shocked when markets eventually and inevitably reveal the committed obtuseness of it all.

The relevance here is both economic and financial. That expected tailwind of housing to “lift the economy into a stronger growth pattern” may in fact turn out to be the opposite (as I argue consistently). Financially speaking, we might begin to wonder and ponder such incongruity about other markets that likewise count themselves among the assumed-impenetrable cloud of Fed “support.”