Official measures of inflation don’t really tell us what they are designed to demonstrate. Any expectations of veracity should be very much tempered by the real world complications of price changes. Ultimately, we are trying to measure redistribution of the sort that is as far, far from homogenous. The effects of price changes are going to be drastically different across the full spectrum of system participants and agents.

By and large, orthodoxy persists in appealing to “inflation” because it is believed to be a catalyst. There is some acknowledgement of these complications of redistribution, but only in terms of a cost/benefit analysis that strangely only predicts more benefits than costs. In the course of such socialization, there are eggs to be broken in the inflation omelet.

Despite the persistent appeal to debasement, nothing has gone to plan anywhere it is being tried. Japan persists in its malaise, now having nearly destroyed every economic advantage built up since the end of WWII. The majority of residents in the US (via poll estimates) believe the country has never left recession. Europe is supposed to be experiencing recovery, but only in the narrowest sense of a slew of non-negative/slightly positive numbers.

In Europe, despite artificially “supporting” (via threat) every asset market price to be found, the economy continues to sink absent any forward demand. The idea of recovery is lost on the spreadsheet practitioners who only model economies and have no actual experience of them. Inflation now falls closer to zero, decelerating more than 1% since July (from +1.6% to +0.5%) encompassing all of this presumed recovery period. 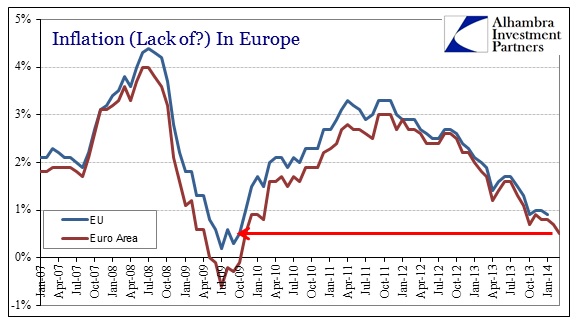 While it tells us very little about the redistribution taking place in Europe, what these figures show is that there exists very little external demand for anything in the real economy. There is a very strong correlation between such low inflationary figures and recession. Alongside loan and credit creation, there is no “money” footprint introducing such a gangly catalyst. In fact, there is a conspicuous lack of any catalyst at all, which is consistent only with this new kind of “recovery.”

You might be tempted to dismiss these results as particular to Europe, especially since the ECB has not (yet) joined the full balance sheet expansion embraced in the US and Japan. Despite that extraordinary difference in policy operation, the results are shockingly the same on both sides of the Atlantic. 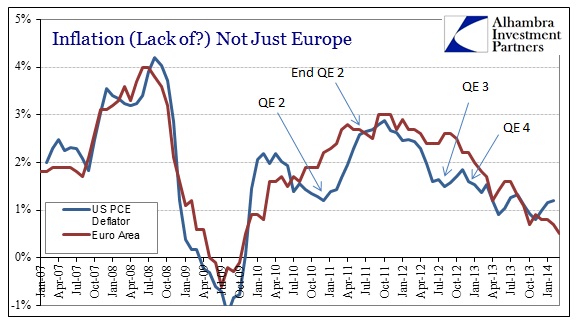 The tandem nature of these measures of “inflation” more than suggest a few faults in orthodox explanations and interpretations. For starters, there is only consumer inflation included in these measures, meaning an entire class of potential uses of credit and “money” is left in the dark. It needs very little study, however, to see asset prices experiencing the full froth and fury of central planning via central banking. The higher asset prices go on both continents, the less likely financial participants will be to settle for low-interest rate lending into the real economy.

It does very much suggest that there is almost a zero-sum game now in terms of monetary expression – the higher asset prices rise (including all forms of credit) the lower consumer prices fall as marginal demand for anything is sapped via the credit channel. There is no room on the collective balance sheets of global financial participants, it seems, for both marginal lending to businesses (particularly without size) and financial speculation. If it can’t be securitized, it can’t be financialized and produce spectacular price volatility (only upside, of course; downside is the Greater Fool’s problem). Besides, the chance for total return on the speculative side far outweighs the boring and utilitarian aspects of real economy credit under the guise of monetarism; not to mention central banks are implicitly supporting asset prices and not creditworthiness.

You would expect the imbalance to only grow over time, as the lack of demand suggested by these inflation figures only increases the dour outlooks of those in the real economies of both jurisdictions. That will only “convince” more financial resources to move to asset inflation at the expense of the other.

In another instance of debunking, this description shows that one of the main theories behind orthodox appeals to inflation is totally wrong – these are not closed systems. The fact that both the US and Europe are in almost perfect tandem conclusively establishes the open nature of the global financial system, especially as it dominates now over the real economy. Both the Federal Reserve and the ECB assume each respective economy as closed, but that cannot be the case or inflation rates would be at least partially idiosyncratic beyond very brief divergences. Since both central banks have, again, used separate means to achieve “stimulus” and both systems ended up so aligned regardless, it cannot possibly allow for any other interpretations.

That is true, of course, beyond just geography. The open system applies vertically as well as horizontally. Mainstream economics posits that financial channels run exclusively to the real economy, but after the history of that past two decades (and going back even further) there should be no basis for that expectation. The exchange of financialisms into asset prices is far more than a “leakage” of credit intervention by centralized means, and that potentially torrential flow to asset inflation is a second fatal violation of the closed system hypothesis.

It would be exceedingly difficult to try to yield such control without at least understanding the process, yet that is exactly what we see. Inflation is there, just in nothing that can fairly be called a recovery. This new kind of recovery is known colloquially as a bubble.