The word decoupling has made a comeback in recent months. In 2008, it was believed that the world would be able to withstand a slowdown in US growth, as global markets would “decouple” from the primacy of US consumers. In some ill-conceived instances, it was even argued that financial markets would as well. Of course, we know that the interconnected nature of global finance (through eurodollars mostly) rendered such thoughts nothing more than flights of fancy, but the cursory attractiveness of this idea has persisted in real trade terms.

The current incarnation seeks to solve the “mystery” as to why the US seems relatively robust in the face of obvious slowdowns elsewhere – most notably and dangerously with China. In a bit of a reversal, the US is thought decoupled and isolated from emerging markets turmoil (which includes both economy and finance). Even in a very basic sense of global trade and the supply chain, that could only be the case if there was a durable and evident internal change within the US. In other words, that would mean a total reversal of offshoring.

There is a much easier explanation for this sort of “mystery”, namely that the original premise if flawed beyond repair. Looking at actual data (as opposed to sentiment surveys and other corruptions) you see quite clearly that the US is in no way different than the rest of the world. In fact, trade data, including today’s release, makes plain how the US fits within the wide reversal of the global supply chain, and thus global trade.

I don’t usually refer to the US dollar indices of various types because I don’t consider them all that helpful. The US dollar “price” is driven far more by finance than trade, but I refer here to the trade weighted dollar index to eliminate any currency factor from the discussion. A “stronger” dollar is believed to be, in the simplest of orthodox terms, favorable toward imports, i.e., US consumers can purchase more imported goods per dollar. 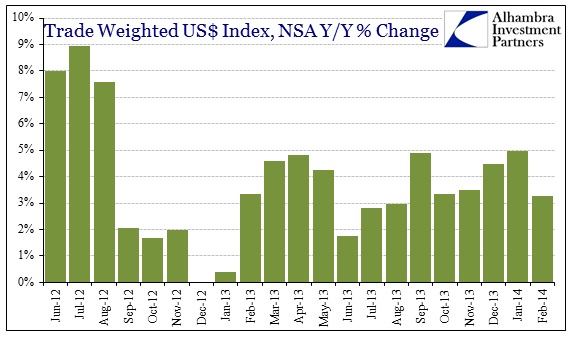 According this index, the US dollar has continued to rise in relatively steady fashion, meaning currency terms should be favorable toward imports. 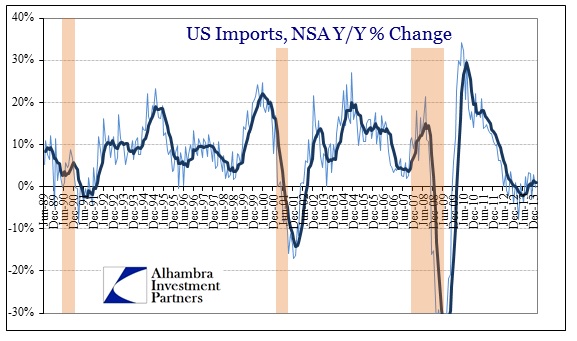 Looking at the actual data, we see that US demand for imports is at levels far more consistent with recession than anything else. While I have eliminated the US dollar as a potential culprit, there is the fracking boom in energy to consider. US imports historically have been driven by petroleum, so an increase in domestic energy production may well be the source of diminished pace of importation. 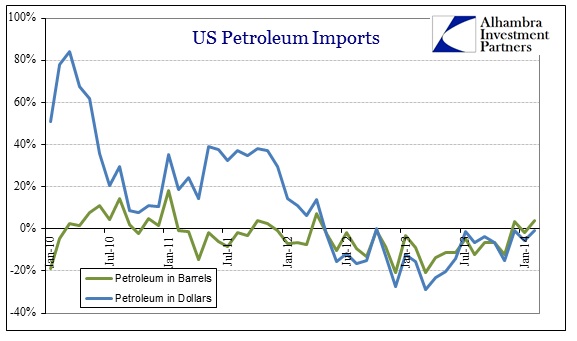 And that has been the case for much of the past two years. US imports of oil have fallen considerably. However, in two of the past three months US imports of oil have gained Y/Y – something that has not occurred since the end of 2011. So while the fracking and shale processes have dampened enthusiasm for foreign energy, we are beginning to see signs of an end to that marginally. 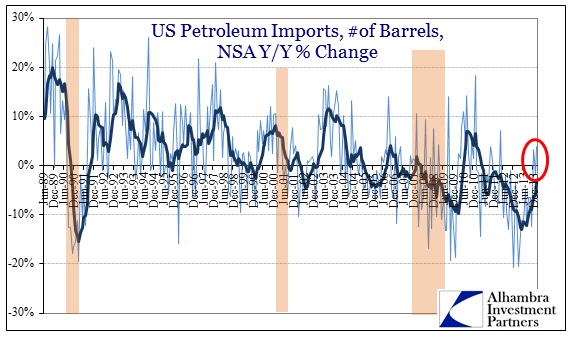 If we eliminate petroleum from the import figures, the pace of US demand for foreign goods still looks recessionary. 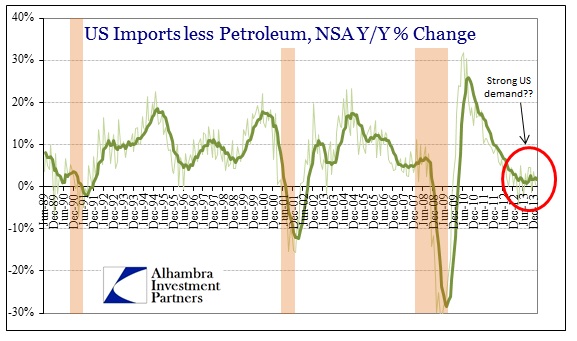 With those factors in mind, US trade in terms of the supply chain – US consumers buy products from manufacturers in Asia, who in turn buy resources from Brazil, Australia and elsewhere – shows exactly what you would expect given recent turmoil in exactly those places. American end market demand for the next level’s (namely Asia) produce is clearly a cause for contraction and instability further down the line. 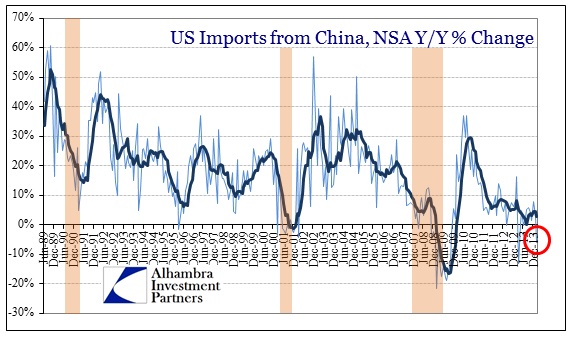 First, and maybe most importantly, is China. The initial trade data on the Chinese side indicated a February collapse in exports to the US. That was pretty much confirmed by the Census Bureau estimates in dollar terms. 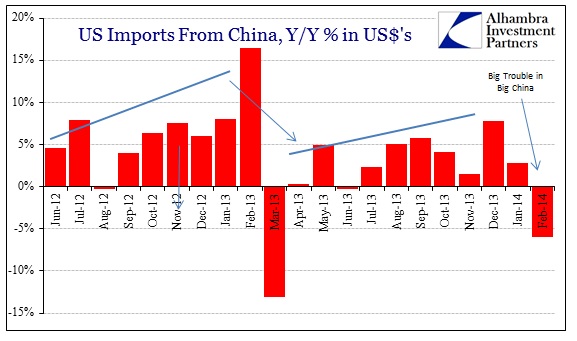 Given this data, we don’t have to wonder why the process of defaults has begun in the weaker Chinese firms. Without “unlimited” credit growth, there is no way businesses at the margins can continue to survive under these lackluster trade conditions. An export economy cannot long continue toward trend growth without similar and concurrent growth in its end markets (or else it will have to find other sources of growth, such as property bubbles).

That also applies to Japan. In what can only be classified as a direct rebuke of Abenomics, Japan’s second largest export market refuses to “realize” and take advantage of the weaker yen. Again, a stronger US dollar against the yen is supposed to (according to orthodox theory) make Japanese goods far cheaper and more competitive in US terms. So it was simply expected that US imports of Japanese goods would surge. 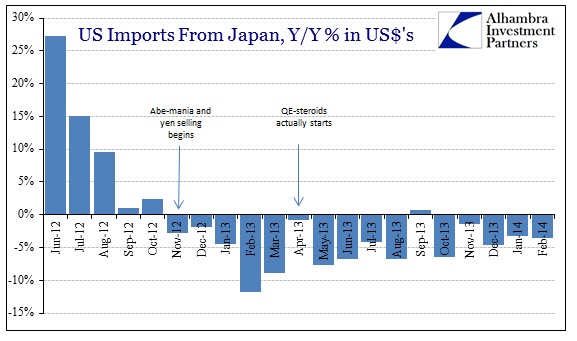 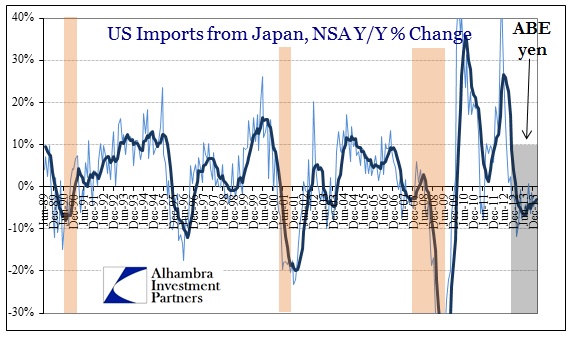 Perhaps the entire economics profession needs to rethink the idea of ceteris paribus when constructing its theories and models.

This data simply confirms all sides of the global trade contraction. There is no growing US demand for imported goods despite every orthodox measure to make it so. Further, that lack of US demand is eroding the supply chain as it wraps in various manners around the globe. There is no decoupling because there is no American economic acceleration.