For the sake of readability, this part of the labor analysis will forgo discussion of, or even any reference to, multi-fractal equations. Instead, it is a look at the employment “market” as it relates to the trend component of the economic system. It is here that there is the most contention, as clearly there has been a serious shift in labor market “potential.”

Overall, there are numerous similarities to the recovery in payrolls during the current “recovery” period and its immediate predecessor. That in itself is a big clue that there is something very much amiss with systemic function. The dot-com recession was extremely mild, particularly in direct comparison with the Great Recession. Therefore, by all expectations, there should be nothing similar about their respective recovery processes.

I presented this obvious deviation in trend before, as it was evident in the JOLTS data (among other places). There is also remarkable consistency in trends within the labor market itself. In other words, the composition of the labor market in the current period is following closely the pattern set out during the housing bubble.

If you view the major industries and the growth of jobs in each, it becomes obvious that the vast majority of whatever growth has been attained by only three (four if you add retailing).

Of the estimated 8.2 million jobs added in the 50 months since the trough of the employment market in February 2010, 5.6 million or 68% are limited to Professional & Business Services, Leisure & Hospitality, and Education and Healthcare (those figures rise to 6.5 million or 79% if you add retailing). In other words, it has been a recovery of bartenders and temps to go along with the education bubble and aging demographic costs. These results are even replicated across time scales (self-similarity and power law?; I guess there is one reference to fractals), as the same proportions hold since October 2012 – 63% of all job gains in those three segments; 74% if you add retailers.

I think that is very much common knowledge as it has been talked about in great detail for some time. However, that breakdown is almost identical to the recovery period during the housing bubble. In the 50 months from the trough in 2003, the overall economy added an estimated (Establishment Survey) 7.8 million jobs, or about 6% gross. Further, of those jobs, 66% were again concentrated in those three segments (73% if you add retailing). That is astonishing to see how close in character and scope these two periods are, particularly given the drastically different overall circumstances. 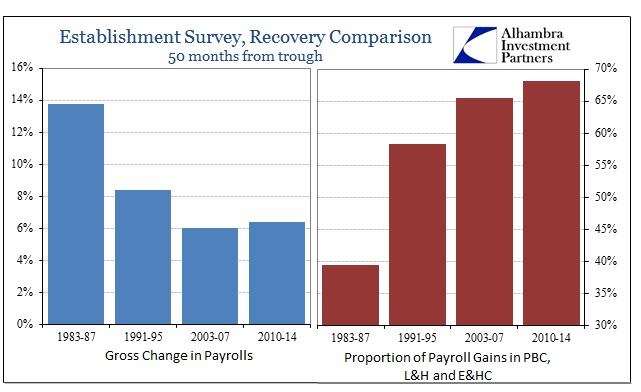 Going back further in history, there does seem to be a correlation between the pace of overall expansion and this concentration in these low-quality payroll industries. In the recovery after the double-dip recessions in the early 1980’s, gross payrolls grew by almost 14% in 50 months – but less than 40% of those were in the 3 highlighted segments. The 1991-95 recovery falls strikingly in the middle in both sets of data points.

The data seems to be teasing a story whereby the growth in payrolls in these 3 (or 4) low-quality segments has been actually constant throughout history. However, the vital difference is that growth over and above this “baseline” has become increasingly scarce.

But rather than assume cause and effect, I believe these are symptoms of a more basic governing dynamic. It would seem to suggest, and strongly so, that the common thread among these results is the bubble economy (particularly as it has increased in importance and scale since the early 1980’s; not achieving full saturation until later in the 1990’s, offering a compelling explanation for the hybrid results of the 1991-95 period). The more monetarism penetrates, the greater the distortion in economic function.

The addition of financialism seems to act as a depressant on various portions of the economy which used to serve as the foundation for strenuous and lasting growth. The symptoms of that are expressed in increasing devotion to financial management and investment; share purchasing and offshoring among the most relevant to this discussion.

Again, these are well-known, but the results above show that there is also a corollary. The intrusion of monetarism does not actually produce any advancement as these low-quality jobs are always present in any economy. In other words, the credit portion of the bubbles only served to hide not just the inability of monetarism to produce durable and sustaining economic gains but the erosion in function as well. Now, in the aftermath of the Great Recession and the absence of the full scale of credit bubbles (asset inflation is still around, however), we get the same exact labor market trends without any incremental advances in other areas. There is now only the low-quality jobs that have existed since industrialization, and even before then in some agricultural form. Nothing else. That is why a majority of Americans still believe we never left recession, as there is no wide experience of what can fairly be called economic growth.

The system has been stripped bare to the “trickle” of the “wealth effect” that has been around since time immemorial. A real economy is exactly the opposite, a system that produces increasing gains spread out and dispersed, expressed in the labor market as diversity of strength and growth. That is actual wealth, not some paper pushed into existence in service of the feudalism of “aggregate demand.” 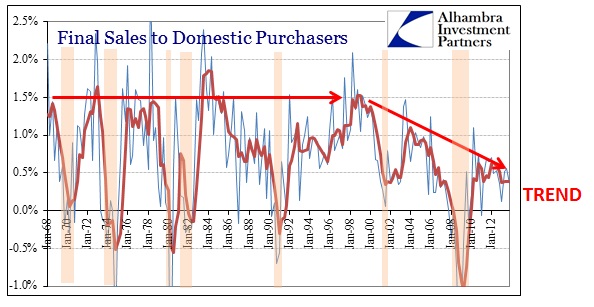