At the extreme end would rest a situation where policymakers will adamantly argue an otherwise untenable position. In other words, they will tell you the economy is recovering when indeed it is clearly not. Again, rational expectations theory contends that if they told the public the truth, and even crafted policy based on that admission, economic agents would then react on expectations of recession and thus guarantee one in the process.

If, however, policymakers can convince a wide enough audience to ignore all incoming data and act as if better days are “just around the corner”, it is believed (in some forms) that such can actually reverse the economic trajectory entirely. A recovery is not an organic process of resource re-allocation and price signaling, it is the economic equivalent of self-esteem principles. Such is the current state of monetarism, that all is reduced to the language and philosophy of mass psychology. Or in the case of what I have just described, literally mass delusion.

Given that background, I always wonder on what side of the fence some of these more ridiculous statements fall. Are commentators “in” on the policy direction, thus “coloring” commentary toward that pre-slanted objective? Or are they merely parroting, becoming what might fairly be called “useful idiots”?

This all, of course, presupposes that policymakers have enough understanding and acumen to develop such a contraindication. If history is a guide, and I think it really is, then the experience of 2008 demonstrated no such prowess and efficacy, instead confirming that modern economists are simply and plainly wrong. In some respects it would be more comforting had there been intent behind the unending appeal to optimism, as if it were a carefully crafted psy-ops program that had a prayer of success. We are left instead with inmates running the asylum.

I cannot think of a more apt example than the retail sales figures for March 2014. Here is an all-too-representative sample of commentary today:

U.S. retail sales recorded their largest gain in 1-1/2 years in March, in the latest sign the economy was emerging from its weather-induced slumber and on track to accelerate in the second quarter.

“The case continues to grow that the economy is bouncing back in March following an unusually severe winter,” said John Ryding, chief economist at RDQ Economics in New York.

It sounds like it came straight out of the rational expectations theory manual to monetarism, complete with the obligatory temperature analysis by the credentialed economist. No context is provided, even though numbers in isolation have no meaning whatsoever. An increase of 1.1% M/M sounds impressive on its own, but if it followed a steady series of monthly declines then not so much.

The basis here amounts to a weather-driven interruption in an otherwise solid growth path. Setting aside the basic contradiction evident in that very observation, we should be able to spot a correlation between weather and economic function, retail sales in this case.

Despite warmer weather in March, the growth rates of every single measure, save one, retreated further. There has been no weather-related bounce in anything outside of autos (and even that wasn’t impressive, total retail sales including autos increased from 1.79% in February to 2.57% in March; only four months since January 2010 have been worse). 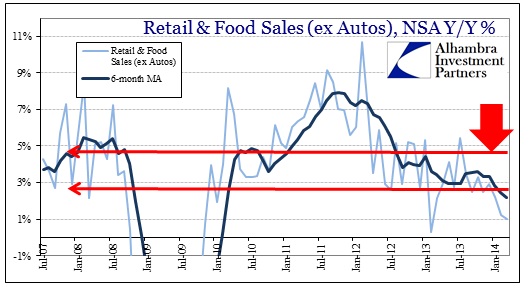 Nothing in the data would suggest anything remotely like a “surge”, except if one were to invert the chart completely.

The common trope as it relates to weather in recent months amounts to a delaying factor – as in consumers, who would otherwise be spending great sums, have been physicaly prevented from conveyance to retail locations, meaning purchases have been put off to some future date.

Since the weather was far warmer in March, given the natural and not unexpected cycle called seasons, then a combined 3-month perspective should smooth out any weather-related effect. If purchase activity was only delayed in January because of one of the Polar Vortices, then such activity would no doubt have taken place by now. The net effect across three months should be close to zero, as the mainstream narrative is attempting to address. Does anyone put off buying a refrigerator for more than two months because it was cold at only one point in the past? 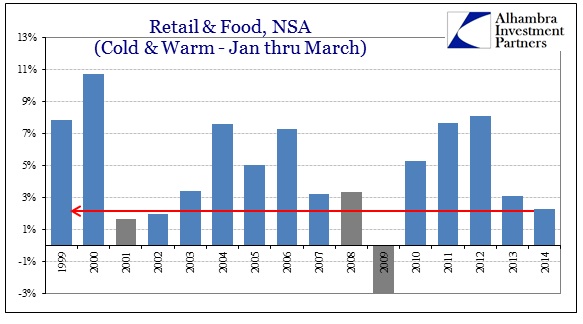 Even if we include auto sales, the net 3-month comparison is atrocious. The only years with lower growth (Jan – Mar) were the recession years of 2001 and 2009. The current growth rate is below even 2007 and 2008. Given what retail sales estimates show, these consumers must be under the influence of some unknown (clueless) or unstated (rational expectations) factor to have again “delayed” future purchases (perhaps income?).

Highlighting what is perhaps the greatest failure of monetarism in the current “recovery”, the dichotomy between retail sales including autos and the estimates without is quite pronounced. It was “settled science” that reducing interest rates would “kickstart” the economy, running through interest rate sensitive sectors first before broadening into the virtuous circle. There is no doubt that subprime loans to auto buyers have boosted auto sales, yet there is a clear delinking of that from anything else. There is absolutely no evidence that artificial auto sales have had a wider positive imprint (you could actually argue the net effect has been negative as if it were all suspiciously zero sum). 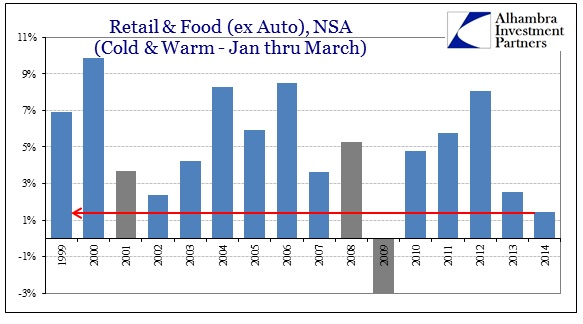 Removing auto sales, the results are spectacularly bad. Instead, the wider economy is slowing considerably, now showing levels of purchase activity below the recessions in 2001 and 2008 (by quite some distance). Beating out the utter collapse in 2009 is beyond reduced standards. 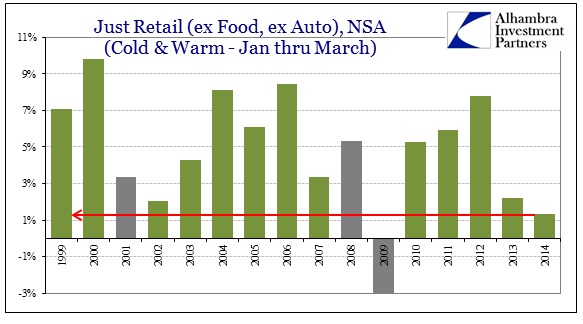 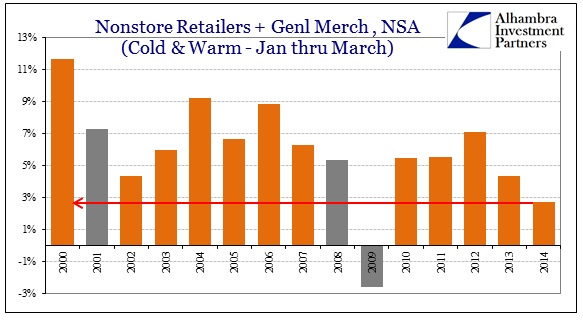 Furthermore, there has been no surge of any kind in March in any of these segments. I have to be missing something because it just doesn’t seem to exist: 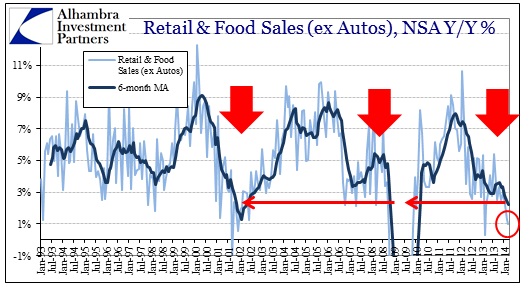 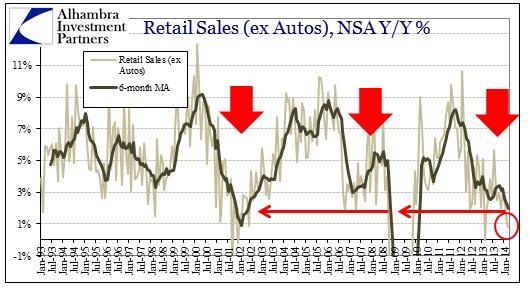 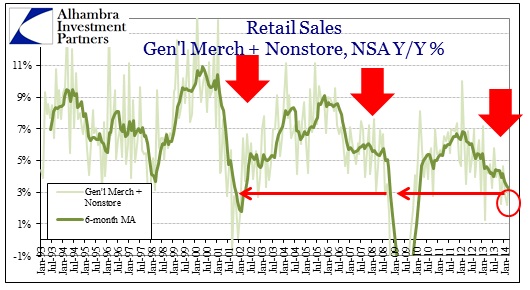 If you actually read further into the article I cited above, it becomes clearer about where this narrative formed. It has to be weather because asset prices are so very “good”:

The slower growth pace in the first three months of the year was underscored by a second report from the Commerce Department showing retail inventories, excluding automobiles, rose only 0.2 percent in February after increasing 0.6 percent in January.

Businesses accumulated too much stock in the second half of last year and are placing fewer orders with manufacturers while they work through the pile of unsold goods.

That has left the inventory to sales ratio at its highest level since September 2009. But with consumers showing an increased appetite to spend, thanks to improving household wealth, businesses should be able to empty their warehouses.

This passage falls under the sub-heading of “On Solid Footing” (seriously), which is probably the last thing you would call an economic system with so much of an inventory imbalance. But nothing is supposed to cure all these problems like “improving household wealth.”

Though household “wealth” has been improving pretty steadily for years, diverting all that “missing” inflation, this time I guess will be different. I suppose that leaves my original rational expectations question without answer, because we still don’t know whether monetarists actually believe in bubble magic and mysticism or they are just counting on the fact you will.