When A Surge In Activity Is Actually Quite Ominous

When A Surge In Activity Is Actually Quite Ominous

March household spending in Japan surged by 7.2% Y/Y, the highest spending growth rate since 1975. That level even beat out March 1997, the month before the previous and similar tax hike. Extrapolating from that one number, there is now more hope that the Japanese economy may be able to withstand April’s tax intrusion without an economic disaster like that of 1997. For its part, the Bank of Japan refuses to budge in its resistance to further QE, preferring instead to take the optimistic case where enough has already been done; seeing just such a figure as evidence of that position.

A drawdown in activity is expected this quarter by nearly everyone, including credentialed economists. The pulling forward of demand into the pre-tax hike period will take some off the immediate post-hike period, and so uncertainty is centered on the period after that. Will the tax increase be a temporary bump on the road to recovery? Or will it kill any and all momentum?

Since so much of economic expectation was based on only exports and wage growth, that more than suggests the latter. Despite the surge in household spending, wages are not keeping up with prices, and surely nowhere close to this spending splurge. That means Japanese households were spending out of savings to beat the taxman. If wages had been moving in the “right” direction it may have been more realistic, by a little, to expect a more permanent shift in behavior, but a surge in spending on savings alone, particularly in Japan, is very much like the classic government/fiscal setup.

We have our own intimate and recent experience here, where the only change in wider trend was due to government policy – the June 2010 housing tax credit. Coming amidst the housing disaster, the months leading up to the expiration of the credit were an island of hope surrounded by fundamentally deleterious imbalance (due totally to previous and persistent government intrusion in both monetary and fiscal “economics”). 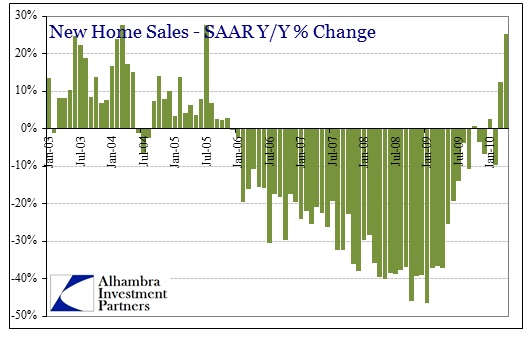 The burst of activity in March and April 2010 surprised most economists for its intensity, leading to an outbreak of hope. Then, as now, most economists were very much aware that the tax credit expiration would be followed by a downshift in home sales, but the hope was similarly that the pulling forward of demand would act as an anchoring of future expectations. That might mean a durable bottom.

The upswing in April existing-home sales was expected because of the tax credit inducement, and no doubt there will be some temporary fallback in the months immediately after it expires, but other factors also are supporting the market,” he said. “For people who were on the sidelines, there’s been a return of buyer confidence with stabilizing home prices, an improving economy and mortgage interest rates that remain historically low.”

More than a month later, the drop in home sales in May was less than feared, leading to further hope.

Vicki Cox Golder, NAR president, said home prices have been stabilizing all year. “. . . the gain in home prices is a hopeful sign that the market is in a good position to stand on its own without further government stimulus,”” she said. “Very affordable mortgage interest rates and stabilizing home prices are encouraging home buyers who were on the sidelines during most of the boom and bust cycle.”

The same buzzwords that were used in 2010 are ubiquitous in 2014 and across all geographies. We still hear, repeatedly, “improving economy”, “low interest rates” and “stabilizing” whatever as if the words themselves hold power. Indeed, that is the intent because all of these government means and measures are designed for one true purpose – to convince you (or your Japanese opposite) that it will all be better soon so you should act now before you miss out.

Unfortunately for Larry Yun and other economists preaching “improving economy”, the housing market collapsed still further. It would take another eighteen months before still other artificial intrusions in the housing market would set off a second, albeit far smaller, bubble. 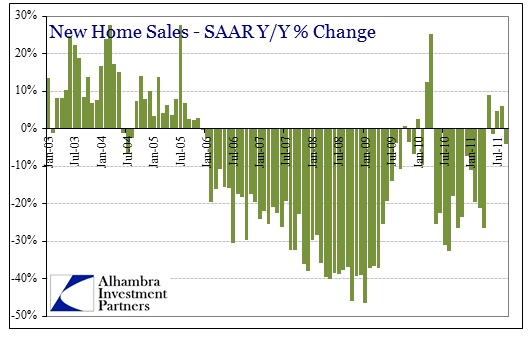 The answers to imbalances are not more imbalances in the other direction. The Bank of Japan and Prime Minister Abe intended to “stir the pot” with intense monetarism, hoping beyond hope that Keynes was right about “pump priming.” All it did was lead to intense and growing impoverishment, which is not exactly a great launching pad for a massive tax hike.

There is nothing inherently wrong with being hopeful about the future, however it borders on deceit where such hope prevents actual solutions from being offered while implementing those that simply make it worse.