The surge in Japanese GDP in the first quarter has given back some cautious optimism that eroded significantly in the fourth quarter of last year. The increase in activity was not unexpected, only the degree to which it reached. Given the household spending data from earlier, this result was foreshadowed. And I think that the analysis of spending applies equally to GDP – that the greater-than-expected figure foreshadows not a robust future, but a bleaker one.

If a changing tax rate forces consumers to consume at such a high level, that would suggest that household expectations are not overly rosy further on. If the economy were truly set to recover, the tax rate would not have pulled forward so much demand. It really is telling that the shopping spree to save some tax money was so engrossing and comprehensive.

That aside, it is not next quarter that will be the most important, but the one thereafter. Everyone knows next quarter will show a contraction, especially the artificial boost provided by residential construction. So it will take a few quarters before we know for sure just how much activity was displaced by such a change (smoothing out this volatility). Again, I would think that if consumers were optimistic they would have taken it much more in stride, rather than gone crazy over it. Some actual wage growth would have made a difference in that respect. 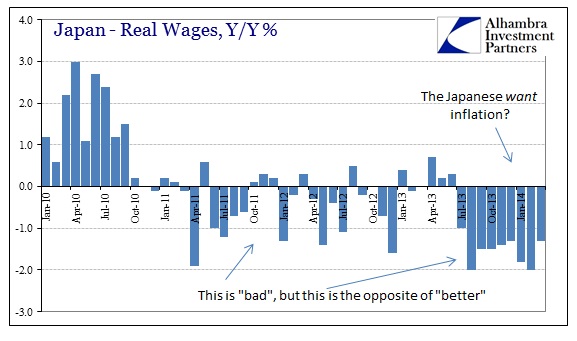 Europe is in a similar predicament to a varying degree. It too looks for a rebound but all we have seen so far is positive GDP numbers. As in Japan, a plus sign is not the end of the analysis. In the wider context, GDP has only rebounded to the slightest amount – and even then only because Germany has failed to suffer the same fate as its fellow continentals.

A spate of worrying economic data Thursday shook stock and bond markets. Economic activity in the 18-country euro zone expanded at a weak annual rate of 0.8% during the first quarter, data released Thursday showed. Excluding Germany, which grew at a robust 3.3% pace, the rest of the euro-area economy contracted slightly during the quarter. 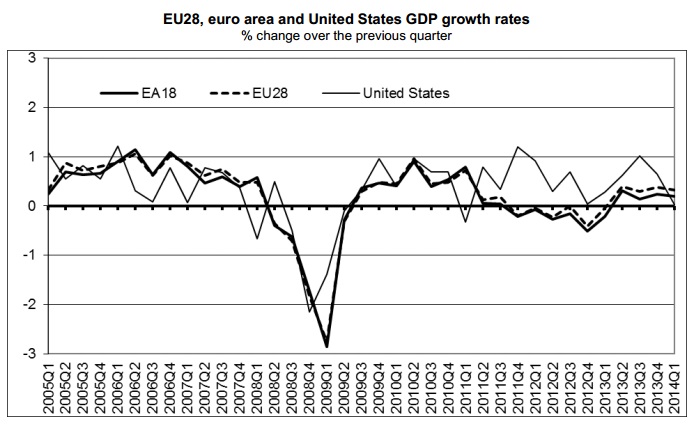 The chart above, taken directly from Eurostat’s GDP release, actually overstates the degree to which the economy is moving. The recent nosedive in the official inflation figures is actually “helping” here in the narrow statistical sense. In nominal terms, GDP has barely grown in the past few years, even if you view the latest move as a completed cycle. 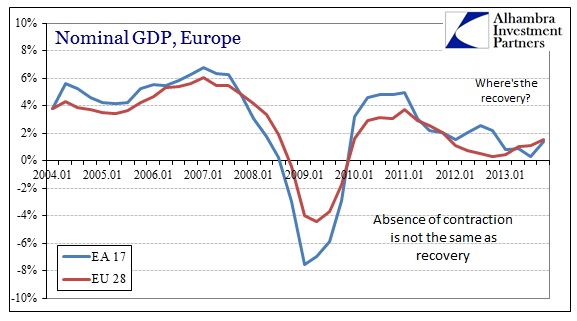 Overall, there has been improvement in other economic factors, but, once again, improvement is not the same as recovery. A recovery is very, very different and amounts to an economy that is actually being efficient and productive. What we see in Europe, as Japan, is an economy being manipulated and under constant intervention and distortion. 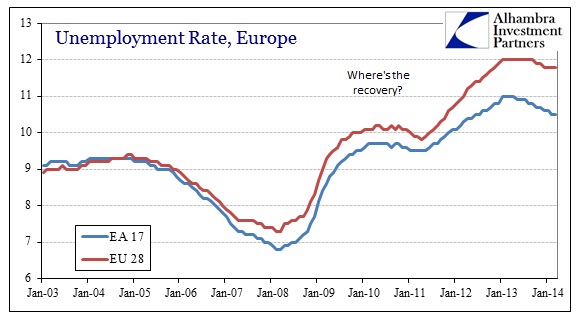 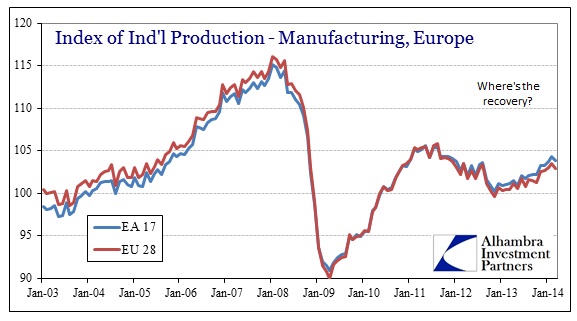 The net change across these cycles, if that is what they are, should not be a condition where you end up worse than where you started. Traditionally, the recession cycle into recovery ends up with employment, for example, easily re-attaining the previous cycle’s peak and then surpassing it by a wide margin. That is another commonality linking the US and European economies (where the US is still behind in total jobs, and further behind in full-time jobs).  But the real takeaway from all of this is that each of the central banks in these geographical areas has undertaken massive, tremendous and sustained “stimulus” and only gained these puny and “unexpected” meagerness.

That spells real, dire trouble for the global economy that is increasingly reliant on nothing but Chinese imprudence. It has been expected for five years now that the US and Europe would actually recover and boost the total supply chain on down all the way to emerging economies – demand in the “developed” world means growth in resource extraction, all run through Chinese manufacturing.

It is very clear here that this is not growth in any meaningful sense.

“My guess is that we will see some pickup as we get into the second half of the year, but the longer we go without getting the 3% growth that many people had in their forecasts, the more concerned you have to be that there are other things going on that we hadn’t fully appreciated,” Eric Rosengren, president of the Federal Reserve Bank of Boston, said in an interview Thursday.

Now that there is at least some recognition of a real and persistent problem (“other things going on here”), the next step is removing the parasite. That may ultimately be difficult for Rosengren as it would require his exit, as well as all of his fellow policymakers.