Deutsche Bank over the weekend announced a significant dilution to existing shareholders, raising some €8 billion in equity capital in two distinct transactions. About 60 million shares are being sold in a single transaction to a new “anchor” investor, Paramount Holding Services, the investment fund of the (a?) Qatari Shiek. The second transaction is a fully underwritten offering of up to 300 million shares, meaning DB has already obtained the commitment of investment banks to acquire any shares not sold into the “market.”

At the completion of these transactions, DB is expecting its primary capital ratio (Tier 1 under Basel III) to rise from 9.5% to 11.8%. The bank itself is saying the capital injection is intended as an opportunity for advancement into several markets, while strengthening core capital ahead of schedule. I think that is true to some degree, but there is clearly a more nuanced situation as it relates to at least one giant’s expectations for future finance. NOTE: none of the following is intended as an opinion on DB’s plans specifically, but rather a commentary and opinion about the state of overall finance and banking.

The most evident question to arise from this surprise announcement is “why now?” Given the rather stark blow to the economic recovery narrative from last week, suspicions running toward balance sheet health can be understood. In that framing, DB’s capital might look dangerous, particularly with its primary position as the largest derivatives trader in the world. As we know from bank earnings across the industry, fixed income has been an extreme sore spot and one of rising concern (derivative trading falls in here).

I do think that is part of the larger picture, but I don’t believe there is any imminent danger for the bank, with management panicking into an emergency dilution. Instead, I think this relates to the overall planned trajectory that has been altered by the events of the past year. That includes fixed income where banks derive(d) a majority of revenue and profitability.

In rebuilding bank capital post-crisis, especially in Europe, the largest “source” of “capital” was intended to be derived from profitability. That is what the global ZIRP (or the European equivalent) is supposed to be, a subsidy of bank earnings to extend “capital” into the balance sheet through internal operations. Capital ratios did rise as retained earnings grew from several sources, not the least of which was fixed income trading. In the wake of last year’s US$ selloff, that is not so profitable anymore.

What is a bank to do about capital if the primary subsidy no longer holds? First, find other means of equity (selling a huge block of shares would do it), and then find another means of profitable “enterprise.” 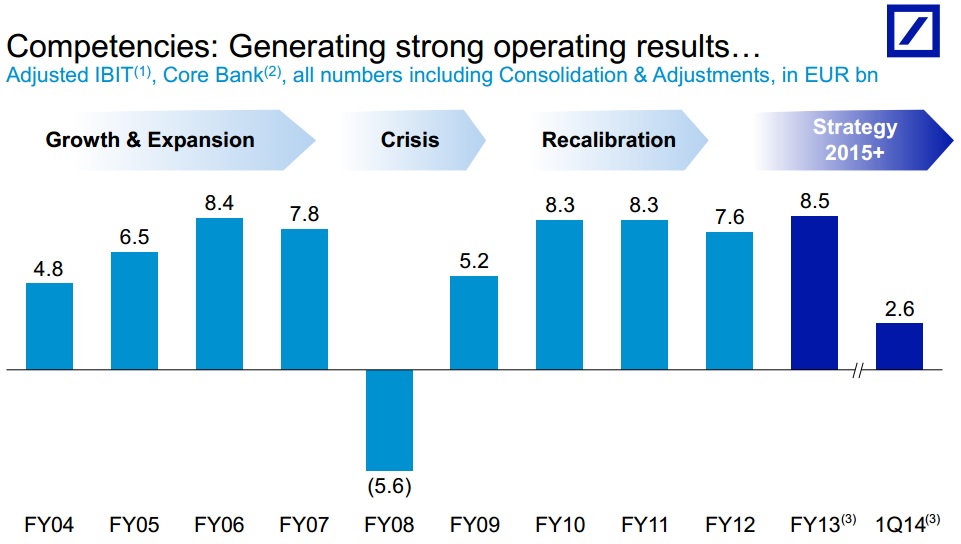 If you look at the investor presentation accompanying DB’s press release, you see on Page 10 just how results have tumbled so far in 2014 as compared to recent history. The effect on bank capital growth is also pretty obvious (page 15). Since the middle of last year (timing is not coincidence), the trajectory of additional “capital” has flatlined. 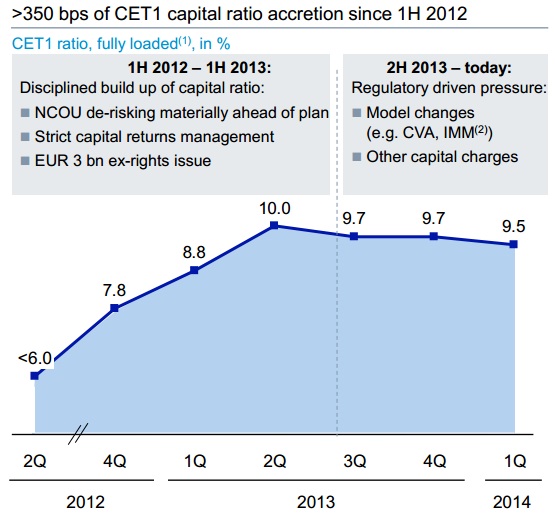 The internal mechanics of balance sheet flow has no longer rendered a favorable arc toward meeting Basel III. Internal profits cost far less in terms of retained earnings “capital” than going into the market and raising it through equity or CoCo’s. If DB does not expect current conditions post-2013 selloff to revert to the more favorable conditions prior, then this weekend’s announcement makes perfect sense (go to page 19 to see the bank’s view of trying to make money in the current climate on fixed income).

Once loaded with fresh “capital”, where will DB go to generate consistent profits in the future? 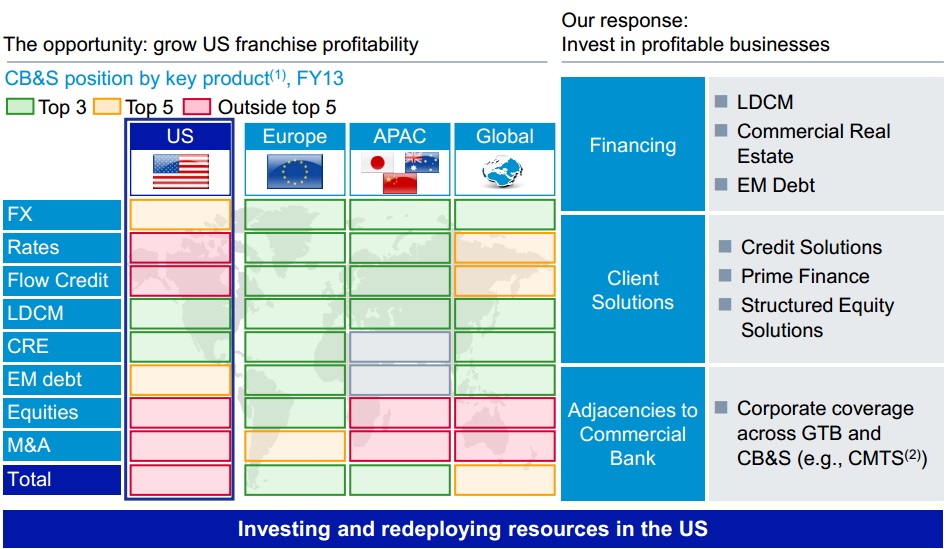 The bank is headed back to US markets (and EM’s) to focus on “debt.” Not just any debt, however, but, as they note on page 28 (shown immediately above) in the right hand section, prime finance and structured equity solutions, as well as commercial real estate and something called LDCM. DB defines LDCM for itself as,

LDCM is a leader in European leveraged finance and is at the forefront of innovation in all aspects of the leveraged debt capital markets and is one of the few franchises that can price, structure, underwrite and distribute senior, mezzanine and high yield transactions on both sides of the Atlantic.

High yield and leveraged loans are where this new “capital” is being deployed, and right here in the US of A. That is the “new” growth opportunity that DB is committing to, as the bank clearly no longer wants to be subject to so much interest rate risk in fixed income trading. That is both a commentary on interest rates and the frenzy in US debt markets.

The final piece to the puzzle, that which pulls all this together, is offered on page 21.

Only those banks TBTF can play here. As DB makes plain, there are only “5-6 FIC players left” and there exist exceptional barriers to entry ensuring smaller banks stay smaller. This oligarchical structure is perfect for DB in “attractive products”, such as high yield and leveraged lending (both can fairly be termed the modern incarnation of junk).

To sum up the weekend: DB acknowledges last year’s taper selloff permanently altered its business and capital plans. The bank will shift its focus for primary profits to US junk because that is where the bubble is currently taking place, a frenzy fit for only those TBTF.

Is this capitalism, where only the big banks can make money off financial repression creating a “reach for yield”? The term “capital” is thrown around but it only amounts to a specific accounting concept and nothing like true wealth that defines a capitalist system. Furthermore, capitalism requires (not suggests, not prefers, REQUIRES) competition to keep efficiency levels sufficient to attain long-term and sustainable growth. This is not what I would call efficiency, as it is simply banks following intrusive policy deeper into the wasteland.

Profitability should eventually decide what resources get dedicated to what uses. But that is the catch – profitability of finance is not being determined by market forces but by intentional policy. Banks are afforded the gilded pedestal because they perform a “vital” function toward monetarism’s obsessive drive for the misguided “aggregate demand” concept.

This is the end result of what was discussed in 2008, but never resolved (intentionally).

MR. FISHER. Mr. Chairman, this may be a conversation for another day, but it seems to me that we’re ending up with more and more concentration—Bank of America, Citicorp, Morgan—and I’m curious as to what we plan longer term so as not to displace the ability of other institutions to play their role in the financial markets and grow their businesses—the super-regionals that are healthy and so on.

Consider the “displacement” Fisher referred to almost six years ago very much past tense. The global bank behemoths dream of bigger bubbles for only themselves – a sad and fitting description to the current state of affairs. How anyone can rationally and logically argue that monetary policy is neutral in the long run defies all propriety. Furthermore, it certainly adds flavor (if you choose to admit it) to Eric Rosengren’s “other things going on” puzzlement surrounding global growth.