An Alternate Explanation For Labor Behavior

An Alternate Explanation For Labor Behavior

Last week the Bureau of Labor Statistics reported that real average hourly earnings declined in April for the first time since last July. With hours worked stagnating from March to April (despite the assumed jump in the number of employees via the Establishment Survey) that meant average weekly earnings, adjusted for “inflation”, fell as well. So for all the celebration over the surge in employment, actual earned income (the far more important part) is depressingly contradictory to that assessment yet again. 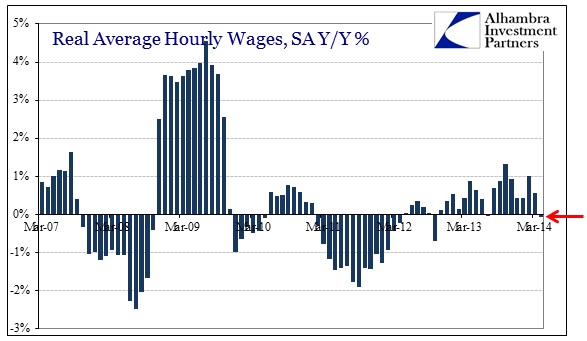 While that by itself should be enough to give pause about the validity of the mainstream employment narrative, there is another more serious development that demands careful scrutiny. The average workweek, for starters, has not re-attained its pre-cycle peak. In fact, the workweek has itself stagnated for some time leading to the idea that labor “slack” is not as enlarged as once thought. That has given tortured “hope” to those that want to see more inflation. 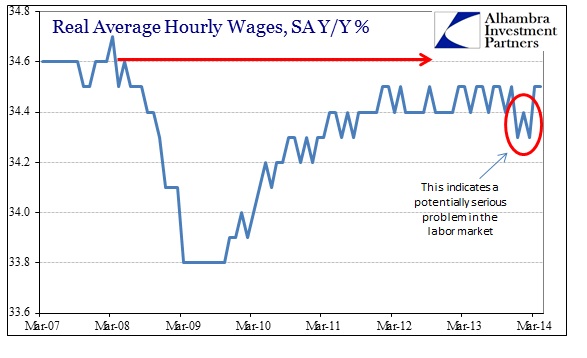 The idea of “slack” is highly contentious as it is, particularly as it sets up and “guides” monetary policy settings through the continued use of the Phillips Curve notion of employment/inflation mechanisms. That aside, there is another element that I think is far more relevant to actual economic function – productivity.

Again, the macro health component of the labor market is not simply the number of employed, nor is it even just labor by itself. True economic advancement in the purest sense is not just the absolute level of labor input usage, but rather how that labor is being used. In other words, businesses need to “get out more than what goes in”, to use a course generalization. A real economy requires productive usage that enhances and enlarges existing processes, i.e., productivity.

We know that there is a significant and obvious problem with labor markets since the level of jobs in the economy now is only returning to the previous cycle peak (and the level of full-time jobs is still, amazingly, 3.5 million less than November 2007). In terms of total aggregate hours worked, April 2014 was about even with the last peak. Yet, over that same period GDP has increased 16.7%. 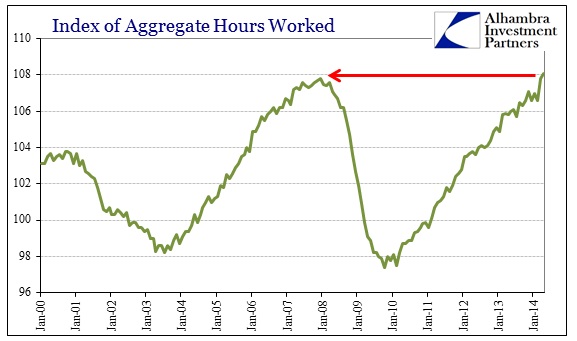 If the total number of hours is about the same, then either those workers have been more productive or the prices of the goods and services produced have risen (or a combination). It is the combination of these three factors that produce the GDP view of economic function. So where total hours were stagnant, price increases added 9.9% (using the PCE deflator), leaving about 6.5% for productivity gains.

Looking at just the “recovery” period, the numbers are quite different, particularly productivity. If we break those figures down to compound quarterly averages, the reason for the lackluster labor market becomes somewhat clearer. NOTE: the estimates and combinations here are very much imperfect, so this is not intended as a quantitative analysis or precise reading, only to illuminate a rough and relative understanding of both structural and cyclical shifts in the economy. 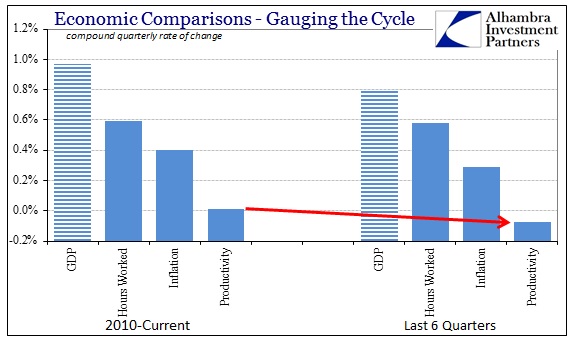 In the 17 quarters of this cycle, productivity has been right about zero. That suggests, strongly, that any productivity gains since the last cycle peak came about solely through the recession and dislocation. It is also important to note here that productivity is the remainder item in my calculation (as it is for the government agencies). GDP has grown 17.8% since the end of 2009, while total hours worked has increased 10.5%. Prices (through our imperfect PCE deflator) increased 7%, leaving just 0.2% for productivity.

If those rough numbers are even close to an accurate assessment, there is little left to wonder about the grotesque state of the economy. Businesses are deriving most of their incremental revenues solely through price changes and population expansion. The lack of productivity is a huge impediment to bringing on new workers (get out more than is put in). Structurally, the only “benefit” to the economy, in terms of productivity, in this complete cycle was reducing the aggregate level of labor. That means labor utilization, in the orthodox parlance, in the previous cycle was exhibiting negative slack – or the usage of labor was artificially high in the last period.

That, however, leaves unexplained why productivity has failed to appear in recent years. There is no direct evidence here, but I don’t think it takes much to see the huge propensity of businesses to invest financially rather than productively as a major reason for that. Regardless of that function, the lack of productivity seems to be a structural problem that is limiting labor usage to demongraphics – more mouths to feed and clothe. That is not a healthy economy, at least in the modern sense (it might have been good enough for a few thousand years ago).

But there is another problem that is perhaps more immediate, a potential change in cycle. As noted in the chart above, while there has been about zero productivity in the past 17 quarters, in the past 6 productivity comes out negative. Again, I don’t know if that is actually the case or not, but our interest here is that productivity may have decreased below the cycle trend.

Contrary to some of the more mainstream assessments, that actually offers a compelling explanation for the most recent drop in the average workweek highlighted above. Some commentary has posited that reduced productivity is a very good sign for the labor market as it means businesses will have to hire more workers to keep up production levels. That might be true if overall revenues and economic growth were increasing, but in periods where revenues are hard pressed to see even a positive number, declining productivity leads to eventual declines in labor usage not too much further down the road.

That is what we see of nearly every cyclical peak previously (with the exception of the dot-com recession, which was itself a unique dislocation). 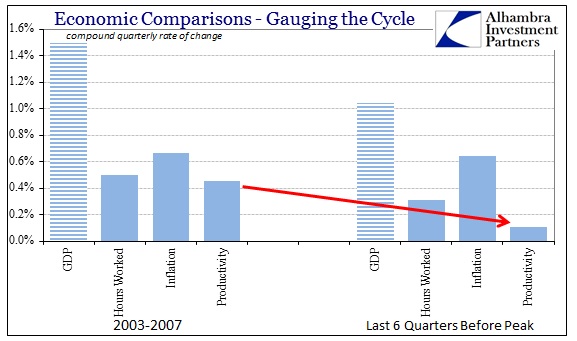 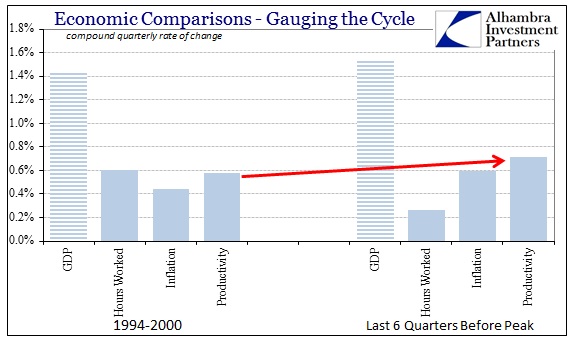 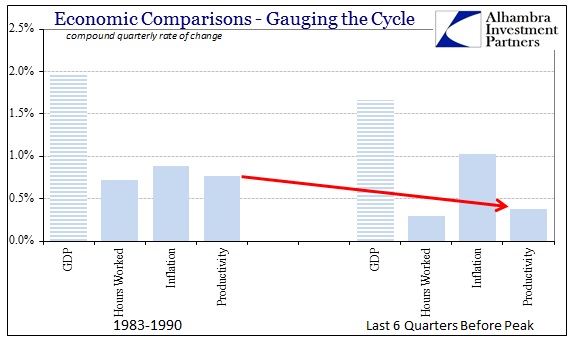 I did not include recessions before 1990 to keep the amount of graphics somewhat reasonable, but the results from those cycles are similar to what is shown above (ex 2001). Overall economic growth slows below trend, as does productivity. The combination of slowing growth and lower productivity in almost every case leads to lower levels of hours worked, meaning reduction in labor usage. Since I am measuring into the cycle peaks, you know what comes immediately after.

Despite the apparent “surge” in jobs and hours worked in the past few months, in actuality the rate of change in labor usage has declined noticeably. 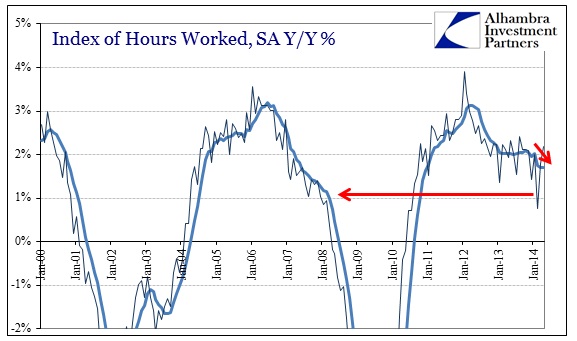 In January and February, the rate of change was as low as only previous recessions. So it remains to be see whether it was the weather driving that, and the last few months are the establishment of a resurgent trend, or if that was the most visible evidence of both structural and cyclical problems beginning to accumulate to a level that can no longer countenance even weak, muddled growth.

There is also another possibility here that is much more speculative. If the level of inflation is in fact higher than what is calculated through official statistics it would mean either productivity or the total hours worked (or both) are actually less than estimated through government calculations – a rise in inflation necessarily comes at the expense of hours or productivity for a fixed level of GDP. I don’t mean for this to degenerate into a conspiracy about inflation “fixing” but rather to introduce the idea that perhaps what we see above in the most recent “cycle” may actually represent the best case. It also raises the possibility of how labor market “strength” (a very relative term these past five years of “recovery”) may be overstated. 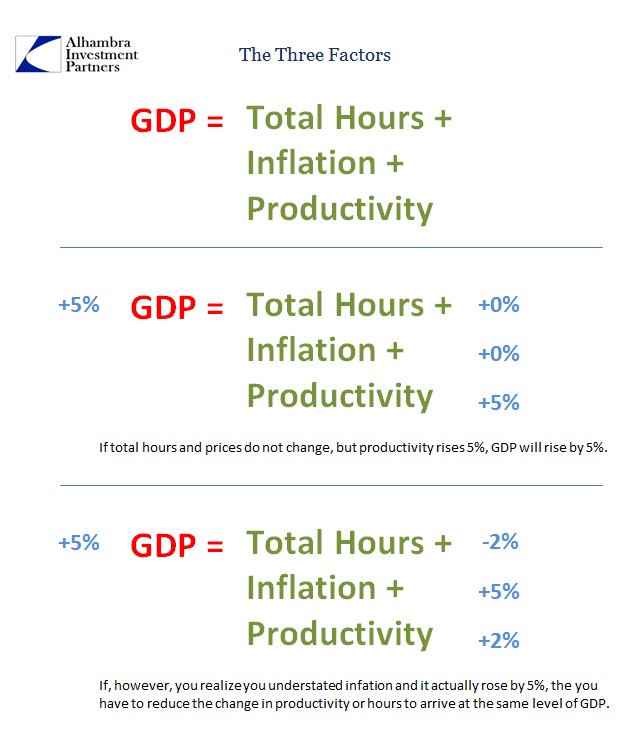