In advance of another rash of housing statistics, one of the main components driving more optimistic expectations is household formation. After being severely depressed by the Great Recession and then the lack of real recovery, at some point population dynamics should begin to drive actual demand for owning shelter. Of course, it seems like a good part of the construction industry is betting on the same thing, only slightly altered, where instead of owning shelter these new households will be renting it.

Regardless, the idea of growth in the number of households has taken root with very good reason. The dynamic nature of humanity should at some point revisit this most basic piece of economic growth. Yet, there are negating factors to consider. After all, there is an equally powerful reason that household creation has lagged so severely since this “cycle” began (annual formation was about 1.2 million per year between 1960 and 2006; dropping to only 550k during this “recovery”). By that I mean systemic impoverishment.

To arrive at that conclusion, we can take a bit of a detour into retired folks – or at least those that might otherwise be considering it. The data series here is not very long, but it does show that, in general, there has been a rising tendency to work after the age of 65 rather than retire and exit the labor force. Both the labor force participation rate and employment-population ratio for those over 65 years old show exactly this. 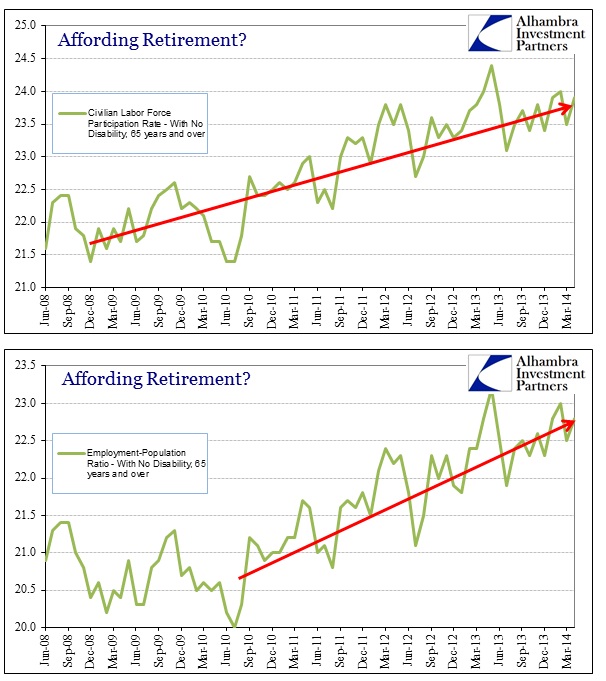 There are myriad reasons for a higher propensity toward work, starting with ZIRP. Portfolios of savings can no longer generate a consistent and relatively low-risk return. And those that were intending retirement during this time frame saw their “savings” in the form of equities destroyed in 2008 and early 2009. Anecdotes more than suggest that these people close to retirement have avoided the stock price frenzy of even the most recent years out of prudent caution, which means they experienced the absolute worst case – decimated on the way down and remained there to toil in interest rate repression.

These are exactly the people that the FOMC means to reach with their “wealth effect” too. Instead, they have been impoverished by imprudence coursing as an ongoing attempt to stir “aggregate demand” through the encouragement of continual recklessness. As a result, they remain on the “wrong” end of asset inflation’s redistribution (who usually ends up with “market” losses?).

But that is not the worst of it, either. As savings have been destroyed and the ability to generate return turned into a banking subsidy, these people are left with all the debt they have accumulated during the previous episodes of monetary encouragement in that direction.

“Older consumers are carrying more mortgage debt into their retirement years than in previous decades,” the Consumer Financial Protection Bureau said in a recent report. The percentage of homeowners age 65 and older with a mortgage rose by 8 percentage points in a decade. As of 2011, fully 30 percent still carried mortgage debt, as did more than 21 percent of homeowners 75 and older.

“During the last decade we went through this shift,” Harrell said. “Before that, most of the homeowners 50-plus owned their homes free and clear.”

It’s not difficult to see this in the reflection of monetarism. The orthodox cohort still maintains that monetary policy has no lingering effects in the long run, but how else might this be explained? Behavior is altered by artificial suppression of the price of risk for extended periods, which not only encourages reckless behavior, it changes priorities. This goes well beyond temporal “investment” opportunities.

Middle-class seniors and the growing wave of baby boomers behind them want to stay in their homes and communities as they grow old, but escalating costs of everything from food to medication to property taxes; battered retirement portfolios; and dwindling savings have today’s older Americans looking to become ad hoc landlords or tenants, even if the practice sometimes is forbidden by zoning restrictions.

“With high costs of living today, and diminished resources of seniors, renting and sharing excess space in one’s dwelling will certainly call into question the relevance of current laws,” said Robert Stein, president and CEO of the American Society on Aging, via email.

It’s not quite grandma eating catfood, but it’s certainly not what people expected, and even more so when they began this century of ultra-activism on the part of the monetarists and their obsession with debt-founded economics. Bringing this back to housing, cohabitation is by far the biggest offset to any impulse of household formation. The poorer, in general, this demographic gets, the greater the propensity for the number of households to shrink.

So here we have the opposite ends of the demographic spectrum, young and old, in somewhat of the same predicament. The primary difference is that at least those nearing and above retirement age actually have some savings and hold actual jobs. College students are impoverished simply by attending a university. That too is a corruption of behavior belying monetary neutrality. Their response: living at home with mom and dad (instead of creating a new one) for longer and longer periods.

While there is a lot of generalization going on here, it fits well within what we have seen of the overall “recovery” period. The past few decades have courted asset inflation and the credit piece of the “wealth effect” to disastrous results. The tradeoff, as Ben Bernanke was so fond of reminding us, was supposed to be a robust economy. Instead, we all get the worst case too, where more people are impoverished without any such recovery in the economy at all. That becomes self-reinforcing the longer it is “allowed” to continue.

None of this bodes well for either the economy or the housing market, which is why there is no such thing as “aggregate demand.” There is a world of difference as to why economic activity takes place. Artificial, credit-stained activity will never be more than a fleeting substitute for fundamental demand. And when the artificiality inevitably subsides, what is left is far worse than not having entertained it at the start. That too is a testament against the illicit concept of neutrality. We may all be dead in the long run, but it used to be nice to enjoy the fruits of free economic expansion whilst awaiting the unavoidable.