Now that we have results for both Wal-Mart and Target, the retail, and thus consumer, picture has been largely filled out. Both companies continue to blame other factors (both cold; Target credit card theft) while dancing around with soft presentations of minor allusions to struggling consumers. At what point do “struggling consumers” begin to register as something more than a mysterious headwind?

The state of US households is more like a recession than some tangential factor that is just running below expectations. The results speak for themselves – there was an obvious slowdown in 2012 followed by revenue and spending patterns that very much equate to late 2007 and early 2008. In fact, going back to 2012, the similarities are almost exact right up until the collapse after the September 2008 panic.

The ups and downs throughout the chronology of the past seven years sure look like two recession cycles. It really doesn’t get much clearer than this: 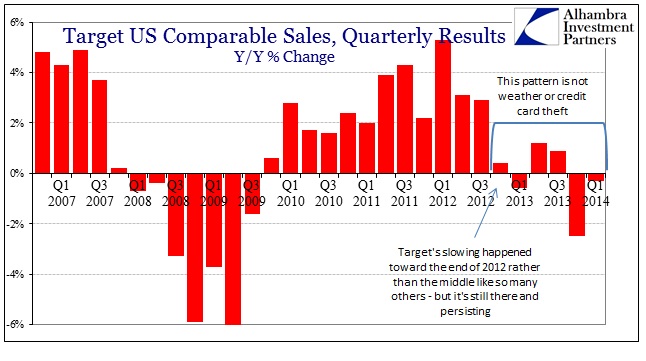 You can make the case that the current down cycle is nowhere near as bad as 2008, especially into 2009, but that is an exceedingly low standard. We have promised repeatedly and assuredly that there would be a recovery, even to the point of having to withstand four separate, immense QE paroxysms. To what gain? To what loss?

If it was only Target and the rest of the retail industry was doing fine, then you can dismiss these results (actual dollars spent as they are, in contrast to sentiment surveys) as Target’s individual missteps. But Wal-Mart has shown the same exact pattern, though actually faring far worse in terms of its 2008 comparisons. Wal-Mart and Target are #1 and #3 in terms of size.

That suggests that consumers were downgrading their shopping impulses in 2008 from more expensive outfits to bare bones essentials. In other words, the Great Recession almost benefitted Wal-Mart by shifting the whole retail scale toward “cheap.” Now, in 2013 and 2014, they can’t even get away with that. It’s almost as if the country and economic system have grown far poorer throughout this “recovery.”

And since Staples also reported, I might as well throw them in here too. One more large retailer (this one with a propensity to serve small and medium businesses) showing exactly the same slowdown/pattern since 2012. 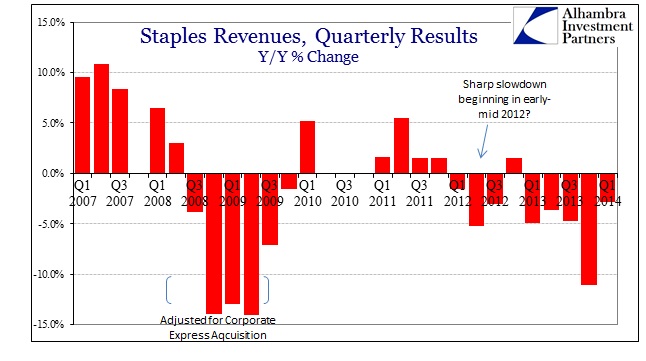 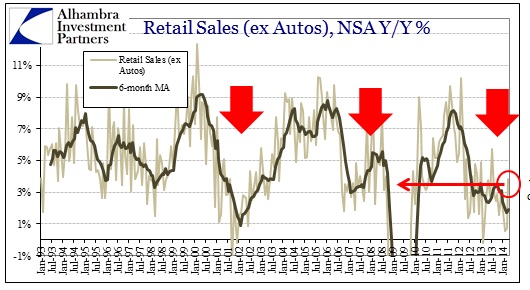