Fox Butterfield was a New York Times reporter who was famously part of the investigative team that published the Pentagon Papers in 1971. Other than that episode, however, he is primarily known for what is called the “Butterfield Effect.” The description of that eponymous affront revolves around the incorrect identification of cause and effect, usually in reverse or inverse.

The most prominent Butterfield Effect, and the one I believe launched the genre, was Mr. Butterfield’s Times article about crime and punishment. In 1997 there appeared the headline, “More Inmates, Despite Drop in Crime” that contained the idea, expressly written, that “prison populations continue to rise, despite a declining crime rate.” Here we see the causal inversion that is related to ideology far more than fact finding, a reversal that reveals as much about the writer as the analysis.

Another terrific example of the Butterfield Effect was published this year in the Atlantic by Moises Naim, in rightly pointing out the utter decay that is destroying a neighbor.

Venezuela is now the world champion of inflation, homicide, insecurity, and shortages of essential goods–from milk for children to insulin for diabetics and all kinds of indispensable products. All this despite having the greatest oil reserves in the world and a government with absolute control of all state institutions and levers of power.

The first sentence follows directly from the second, but not in the manner in which the writer alleges. Even empirically, a government “with absolute control of all state institutions and levers of power” is going to be associated with poverty, depravity and dysfunction every time, but that doesn’t fit the ideological spectrum that is being proffered in the form of tortured logic. Thus the Butterfield Effect has another element, in that its user would rather bastardize cause and effect to its own ends than to look elsewhere for actual logic that would fit the author’s pre-ordained conclusions.

The use of the Butterfield Effect, then, has at least one positive offset of identifying ideological predilection.

I was reminded of this from an article yesterday in Bloomberg. The headline identifies the Butterfield Effect conveniently at the outset, “Japan Risks Low Growth Even as Easing Spurs Inflation.” It is embedded in the core of modern Keynesianism and its monetarist twin that inflation and growth are synonymous. They also believe in aggregate demand as a real concept, as if growth via organic, private means leads to the exact same place as government borrowing and spending (or central bank appeals to more and more debt).

Redistribution, which is what inflation really is, amounts to a different pathway for an economic system by definition. Courting redistribution changes the mix of economic growth. You can attempt the argument that such redistribution will end up favorably, but what evidence is there for that? Japan is the perfect counterargument itself as this “inflation” policy has begun what might be an unalterable change in the Japanese economy for the worse: 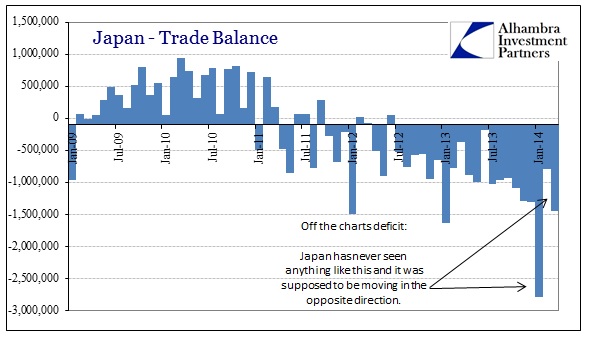 To shelter themselves from yen intervention, Japan is effectively trading productive capacity (that moves offshore) for increasing financialism. We know that process intimately, and where it ends up (one-fourth of the way to where Japan is now).

The Bloomberg headline, rid of its Butterfield mendacity, would read properly with the removal of only one word, “Japan Risks Low Growth as Easing Spurs Inflation.” The absolute control over the levers of financial power is indeed as concentrated in Japan as anywhere else in the world – and has been for decades. I suppose that correlation of twenty five years of economic decay and dysfunction is mere coincidence to the committed orthodox practitioner, though I still hold hope that someone might notice it isn’t really inflation vs. deflation at all that is the primary impediment. Perhaps the only causal relationship that matters is exactly that, absolute control.