There was more bad news for real estate recently beyond the consistent declines in housing stats. The one factor that housing bulls have been awaiting is household formation, though so far that one has remained a drag. And that was supposed to be the catalyst, in that eventually Americans had to begin moving out once more. After so many years of holding back, new households should have begun to appear far more frequently.

The latest estimates from the Census Bureau have set that expectation back significantly. Not only has household formation failed to recover, it has actually gotten much worse – 2009 worse. 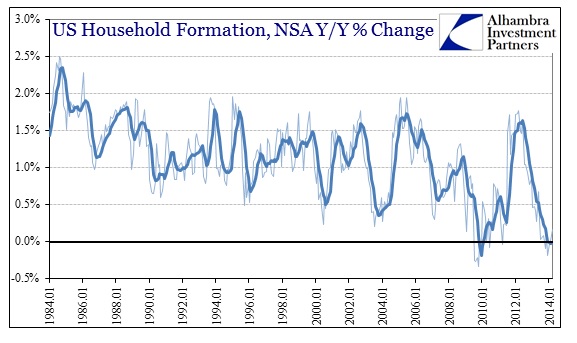 Household formation looks suspiciously familiar, very much like the pattern in the US labor force. 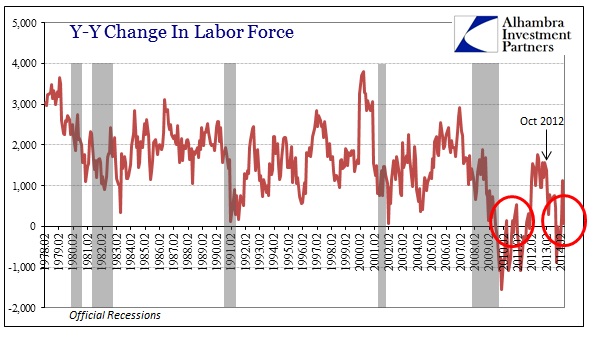 One explanation for this commonality has been the direction of population growth itself. There was a surge in 2011 that dissipated by 2013, which some are using as an explanation for the behavior of the labor force and the pace of household formation.

I don’t think there is any doubt that population plays some role in both of these measures, but I find it far more remote. In other words, population might be a baseline, but these shorter-term ebbs and flows are clearly based on other factors. You need only adjust the rate of household formation by the population expansion to see this: 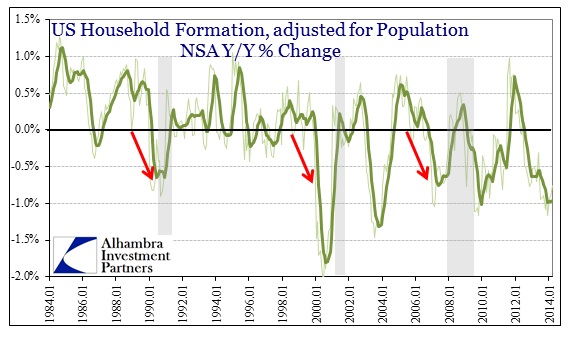 The imprint of macro and other economic factors becomes much clearer taking population into consideration. The starkest transformation is just how low household formation becomes immediately prior to recession. The drop in households in late 2003 I believe shows just how close the US economy was to a double dip and why the Fed was so concerned as to force the federal funds rate (and thus LIBOR) all the way to 1% at that time. Absent the “pull” of the artificial housing mania, there might not have been much recovery then. 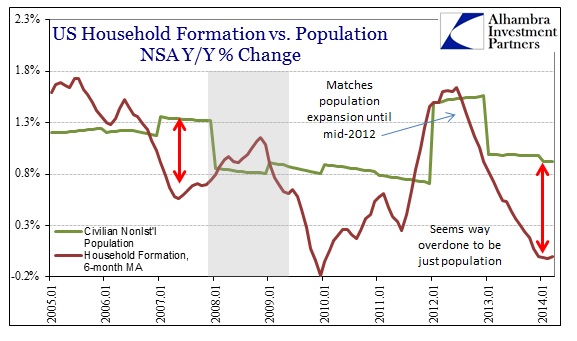 Like so many other indications, from retail sales to capital goods, there has been an outsized slowdown right in the middle of 2012 that has not abated despite all expectations to the contrary. A population explanation just doesn’t seem to be satisfactory as it would not have such an immediate effect. Furthermore, as the chart above demonstrates, the pace of household formation has clearly undercut the population pattern quite significantly. It is not immediately clear why household formation would sink back to the lows of 2009, especially as the growth in the population remains elevated in comparison to the 2008-2011 period.

The only way to consistently explain these results is to countenance additional factors. The primary factor in the immediate sense is any change in the macro economy including cycle. That would also incorporate the growing impoverishment across the debt spectrum as those left with unsavory household balance sheets are set against persistent economic failure that is prominently unable to make and sustain any real progress.

Even if all of this is being directed solely on population changes it would still be a hefty indictment of current affairs. True economic growth transcends population, providing proportionately more opportunity. We aren’t anywhere close to that, so college students are stuck in their parents’ basements while fixed income savers and retirees band together in ad hoc apartment arrangements.

But that’s not the full extent of what we see here. This major collapse in household formation is troubling enough for the real estate market, but the more powerful message may be that this is another huge warning about the current state of the economy. At least the ISM is somewhere above 50, though just how far is no longer as certain as it was this morning.