Economic Acceleration Or Lack of Options?

Economic Acceleration Or Lack of Options?

For orthodox monetary theory, debt (or money) is interchangeable with the idea of economy. A good part of this goes back to the equation of exchange, which still resides deep in the bowels of current theory, where increasing M leads to an increase in Q [or y] or P (with the expectation of more Q than P). To see an increase in debt usage is tantamount to more economic activity. And so it goes with this kind of monetarism, which distinguishes nothing for the sake of generic and generalized “activity” in the course of “aggregate demand.”

The buzz in the orthodox circles about a debt surge recently, purportedly, in C&I loans, as well as even small businesses that have been “overly” reticent to participate in this policy program and intention, seemingly supports the acceleration theory. That is particularly true if you believe, as the monetarists do, that the primary reason for all the mysterious “headwinds” has been deleveraging. If the recent debt surge is real, then deleveraging must have finally run its course and thus a new economic age of prosperity is, as this thinking goes, just about to be unleashed.

The real world offers far more complexity and texture, and economic agents don’t engage in activity just to do so. Looking back through history, surges in debt don’t coincide with a new upswing in cycle but rather its untimely end. If your curiosity does not end with the spreadsheet numbers, this is just common sense. 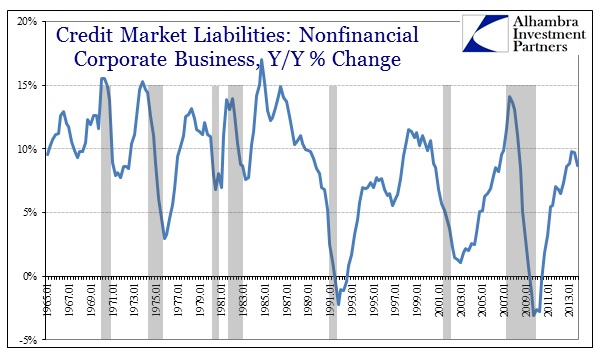 In what we call in our firm the “Doug Terry scenario”, after my illustrious colleague who likes to remind us of this causal relationship, it is commonplace to see debt usage and borrowing spike at the end of a growth period due to nothing more than businesses running out of options. Once the revenue slows and costs begin to add up, cash flow diminishes leaving the business manager/owner with only two alternatives: borrow in the hopes of weathering what might only be a short-term slowdown; or begin to scale back costs to bring cash flow back in line.

What typically occurs is actually both in sequence – borrow first and then scale back anyway once it becomes clear the slowdown is more serious. In the chart above, every recession period with the exception of 1990-91 is preceded by a significant increase in borrowing. Again, cash flow is the reason, not stale hope in the form of the equation of exchange. 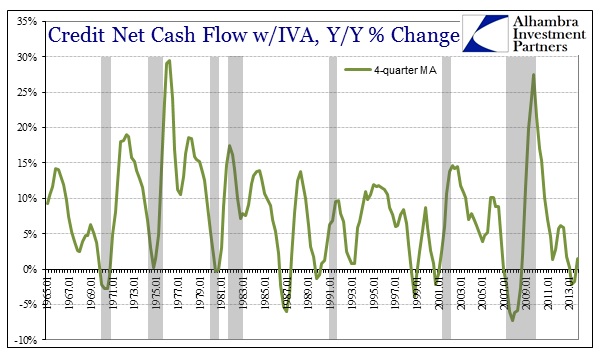 In fact, if you overlay debt on top of cash flow, you can see clearly the offset oscillation – as cash flow ebbs to and below 0%, debt rises to its peak. 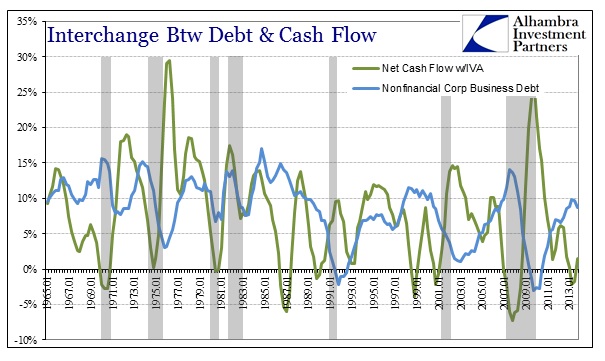 The blue peaks in the chart immediately above (debt) match almost exactly to the green troughs (cash flow), with the exception of 1990-91, timed nearly perfectly to the official recession periods. 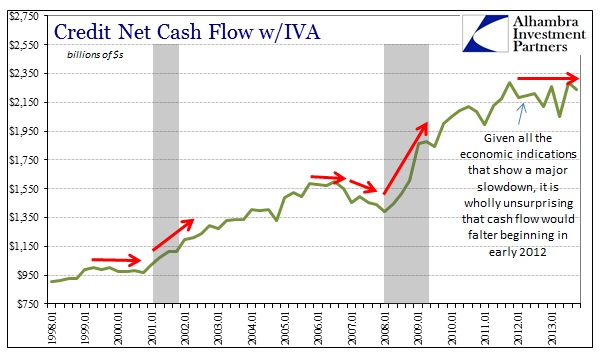 This chart basically demonstrates the entire basis of recession; to re-establish positive cash flow. Negative cash flow rates can only be sustained for so long, and filling the time with debt is eventually self-defeating (and impoverishing). In both recent recessions, the distance between the first perturbation in cash flow growth and recession was about 2 years.

Once businesses began to actively reduce costs, which times right to the start of recession, cash flow growth returned. The question for the current cycle then becomes one of debt and the “temporary” slowdown – how long will businesses continue to increase borrowed balances (and bond issuance) before they inevitably cycle to the second phase of more determined cost cutting? I think that has already started in earnest with capex, so even here the process offers decidedly more nuance toward more than just limited hiring on the labor side.

This kind of behavior, debt surge at cycle peaks, is not limited to business. Households and consumers have showed the same proclivity to borrow at extremes just before cyclical inflection, and for largely the same reasons. It is an appeal to alternate sources of spending power once the primary source, earnings, falters. 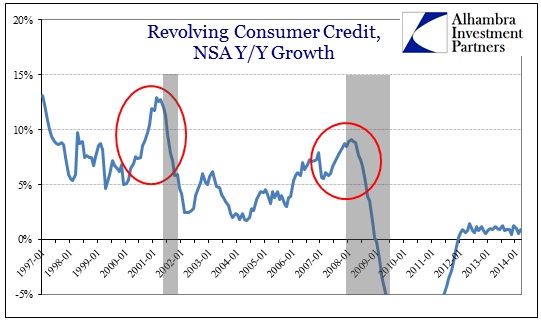 While revolving debt is essentially a dead issue in 2014, it’s other segments that are “protruding” in cyclical fashion now. 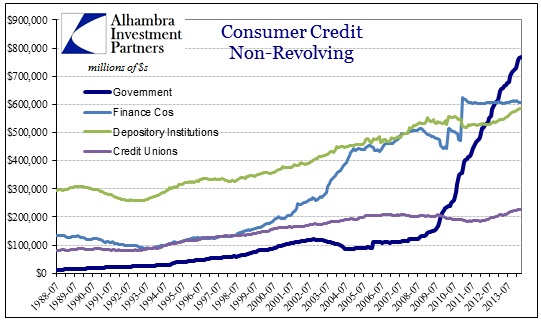 It takes only common sense to see this process as extremely basic and intrinsic – you borrow when you have no other option. Given the powerful statement being made by cash flow estimates, I think that sentiment applies very much to the current predicament.