Bring Back the V; The Economy Took the Worst Case Anyway

Bring Back the V; The Economy Took the Worst Case Anyway

There seems to be perhaps more than a little too much notice about Friday’s jobs report finally regaining the prior peak. In some places, largely political in nature, it has been cause for celebration as if it is some reckoning akin to an actual recovery. That might be true in a vacuum, but compounding in economics is more than just an inconvenience, so that means taking serious account of time. The prior peak may have been re-attained, but the 76 months it took (assuming no downward revisions) is an unequivocal disaster. 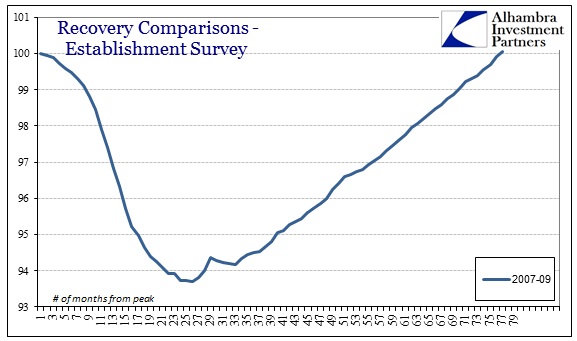 The straight line of the “recovery” since 2010 is noticeable here only in its asymmetry. In post WWII recessions, symmetry was an established notion. The downswing among all the postwar recessions (up to 1982) was nearly equal in duration and magnitude to the recovery upswing that inevitably followed. 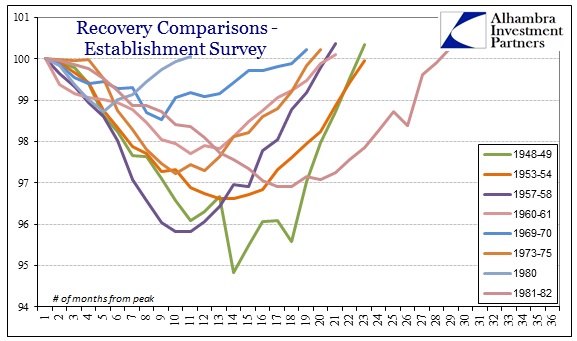 That, of course, was the foundation for the plucking model of trend and cycle, the very idea of the V-shape. On average, the downturn in employment measured from the peak in the eight recessions cited above lasted about 11 months; the average employment recovery was 9.6 months (with variation as to structure throughout the eight). That suggests businesses reacted sharply and positively to the idea of recovery itself.

The modern, monetarist notion of cycle has been different. As long as econometrics has been a mainstream avenue of understanding it has been posited that economists can exercise a fair deal of control over cycle. A good part of that notion rests upon the assumed psychology of it all, where the orthodoxy places a great deal of emphasis on the signaling and emotion of economic agents. It has been expressed that without negative psychology, there would be no recession at all – the perfect “rational” approach. 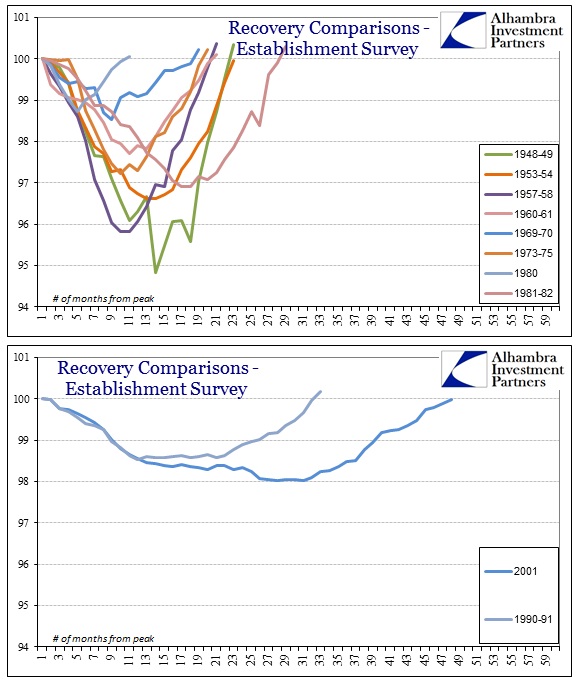 Thus modern monetarism, through interest rate targeting to encourage debt and “aggregate demand”, has put into practice the idea of “mitigating” recession through mostly monetary policy. The mainstream approach does not discount a fiscal side, only that it may not be a necessary component, so powerful was monetarism believed. Therefore, in the next two recessions in sequence, the V-shape disappears and the business cycles followed an almost entirely different trajectory.

This appears to confirm the “mitigation” theory, in that recessions seemed to attain a far shallower trough; the tradeoff being an elongation in the process. Again, symmetry is maintained, a very important idea to overall economic trend. That preserves the main thesis for the monetarist control program, in that, as even Janet Yellen once noted, it seemed probable or even likely to “fill in troughs without shaving off the peaks.” In Greenspan terms, the business cycle could be repealed, or if not fully replaced certainly reduced by active and persistent control and intervention.

Again, the shallow and very mild recessions in 1990-91 and 2001 acted as empirical confirmation. The overall trend in the economy seemed to be uninterrupted as the cycle was “shallowed out.” That idea became more problematic particularly during the housing bubble of the 2000’s as the asymmetry of asset inflation played obviously against the weak recovery that threatened cycle proportion. In other words, it was becoming less clear that the “without shaving off the peaks” part was valid. 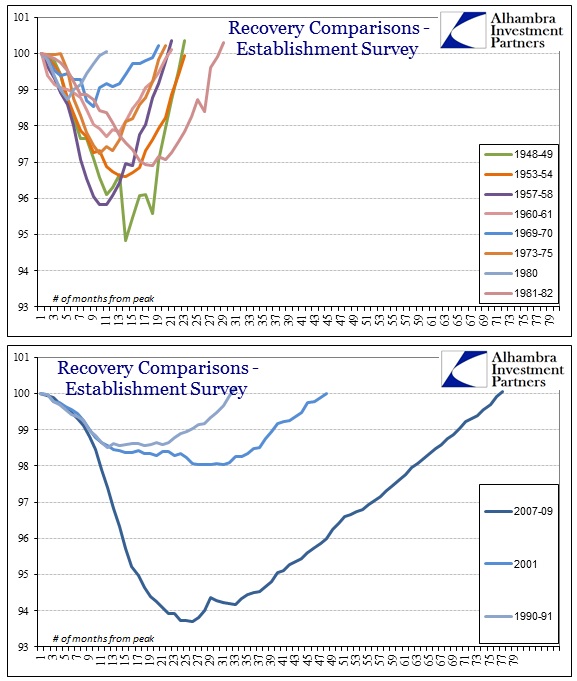 Putting all the postwar recessions on the same scale really emphasizes just how much was wrong about the entire theory. Symmetry, as noted above, has been lost completely despite the celebration over the weekend. Worse, though, the downturn was by far the deepest cycle seen since 1932. That presents a huge problem for preserving the idea of “fill in troughs without shaving off the peaks.” Such a deep trough destroys the business cycle banishment bunk, while the asymmetry of the recovery very, very strongly suggests a total contradiction to monetary theory about the nature of trend. 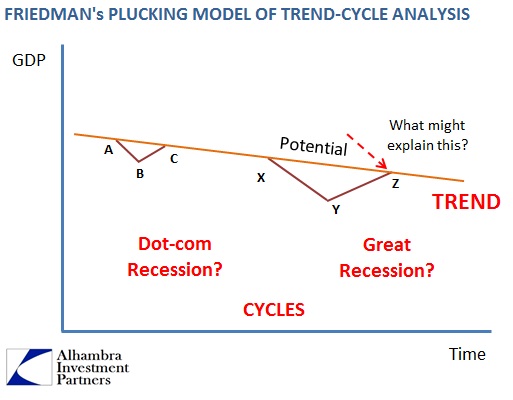 For one thing, just the downturn of the Great Recession lasted as long as the entire cycle of all but one prior “V-shaped” recession (and was even pretty close to that one).  The Great Recession earned its name. 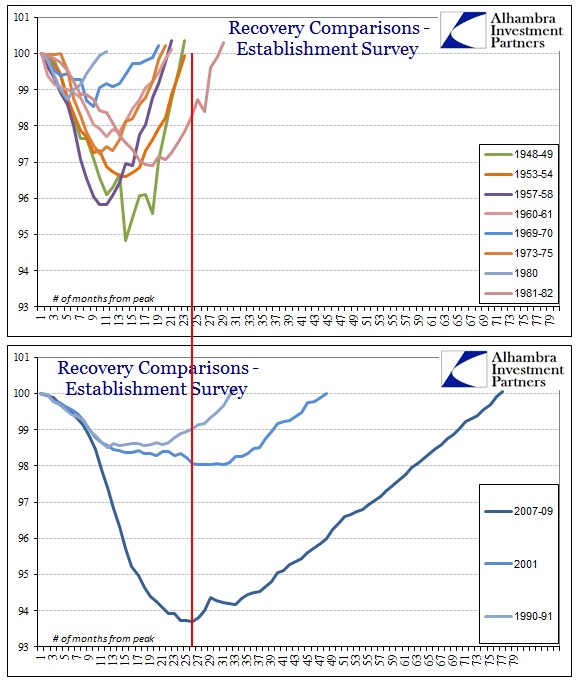 In other words, it was far longer and deeper than anything seen since the Great Depression. But even with that had the recovery followed the traditional V-shape, meaning proportions of length of time, the economy would look far, far different. It would still have been difficult to say the least, but more manageable on the upswing.

These are straight-line extrapolations, so take them for whatever they might be worth only in terms of bland illustrations. Following the pre-1990 recovery average proportions, spliced on to the actual deep and long downturn of the Great Recession, the economy should have regained the January 2008 peak in jobs by January 2012 – more than two years ago. Following a perfectly symmetrical track, same length and depth of recovery as to recession, would have meant a new employment peak by April 2012.

What is noteworthy about the actual track of recession recovery is that it seems to have followed the 1990-91 recession proportionality. That by itself obliterates the idea of monetary control because such theory posited that recessions would take the new shape only if they followed the shallower trough – it was not supposed to be possible that the new shape would scale up to larger and far more destructive cycles themselves.

It comes down to a tradeoff, really, where monetarism pushed the idea that it was better to have shallower recoveries in response to shallower recessions than to be left to the short, sharp designs of less interference. That, for orthodox theory, wholly precluded the idea of a deep and dangerous cycle affair – that was the entire purpose! But since that actually happened, the asymmetry of recovery is wholly inappropriate for the cycle. In short, if monetarism couldn’t deliver on its promise to prevent the deeper downturn (setting aside very pertinent discussion about actual culpability for it in the first place) then there is no reason to preserve the “controlled” and highly bastardized recovery pattern. Would it not be preferable, since we got the “worst” case downturn anyway, to achieve the V-shape symmetry on the upswing?

The conventional, mainstream answer to that is such was not possible and that the recovery, awful as it has been politics aside, was the “best” that could have been done. Counterfactuals are always difficult at the start, but is there not a case to be made here given the stark change in cycle behavior and the non-coincidental timing for it? It is no accident of history, in my opinion, that monetarist theory began to openly call for “fill in troughs without shaving off the peaks”, followed in close succession by central planning via interest rate targeting (destroying risk signals and true price discovery far and wide) and this conspicuous change in recession/recovery behavior. Violating symmetry, intentionally, may have been more than just the huge downside in 2008-09.

The preponderance of cycle data here is pretty conclusive in my mind as to the failure of orthodox theory to live up to its openly stated goals. What this atrocious recovery actually shows is that monetarism has interfered with cycle shape without gaining any assurance of limited downside. In fact, the past seven years show the exact worst case of this economic experimentation with soft central planning – eliminating the V-shape and coupling that to a large downturn.

If that is really the case, and heavy downturns are still possible (they are, and may even be more likely with persistent over-indebtedness, pace Irving Fisher) then bring back the V.