The quarterly update of the Flow of Funds Report (now called the Financial Accounts of the United States, but still Z1) means we can update a couple measures of stock market exuberance – Tobins Q and Market Value of Equities compared to GDP. The delay in preparing and releasing the data, however, means staleness since the latest estimates are for Q1 2014, though that doesn’t necessarily negate backward-looking explanatory power.

Such sentiment may apply in more than one respect with the latest update. The primary component of Tobins Q, the anchor to which stock prices are measured, is nonfinancial corporate net worth. If companies are expanding balance sheet measures assets relative to liabilities, assumed to be through productive business, then rising stock prices in tandem or closely so would not be at all alarming. In fact, that is exactly what we would want and it describes a rising market totally separated and devoid (or mostly so) of wanton asset inflation. 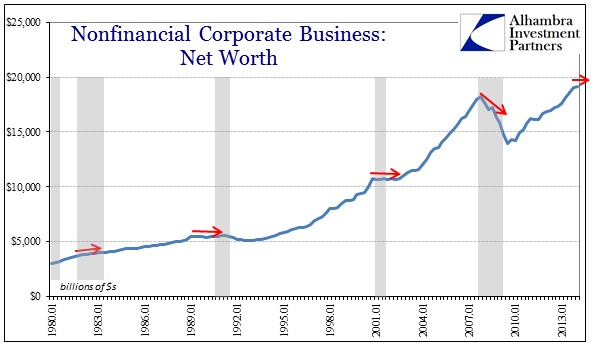 The role of corporate net worth in recession may not be causative, but correlation suggests an incidence of cyclical behavior. Net worth that begins to soften or flatten is indicative of a cycle peak. It is far from clear whether net worth plays a primary role in business decisions entering the inflection or whether net worth is simply a reflection of other factors, but the pattern is evident.

Despite slowdowns in 2012 in those other factors (the list is long), corporate net worth had been steadily rising at a decent clip. That both suggested a healthy expansion in the financial position of domestic businesses as well as providing valuation-type cover for the rapid rise in stock prices. Though equities clearly moved upward far faster than net worth, the seemingly steely trend there reinforced the narrative of multiple expansion through healthy conditions. 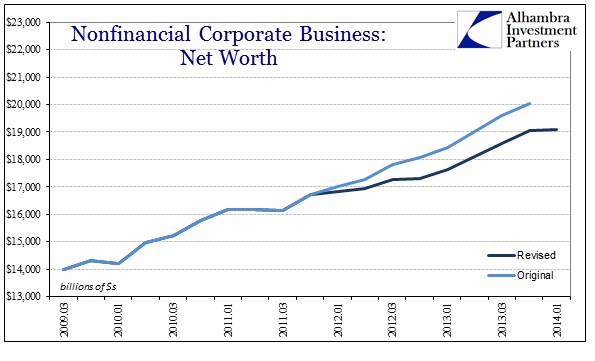 With the newly revised figures, however, there is a major bend in net worth. Revisions were taken back into the 1990’s, though they did not amount to more than rounding – until 2012. Corporate net worth has been revised significantly lower since then, reaching -$1 trillion in Q4 2013.

Revisions were also made in estimates for the total value of equities, as well. These were much smaller, though also on the downside. 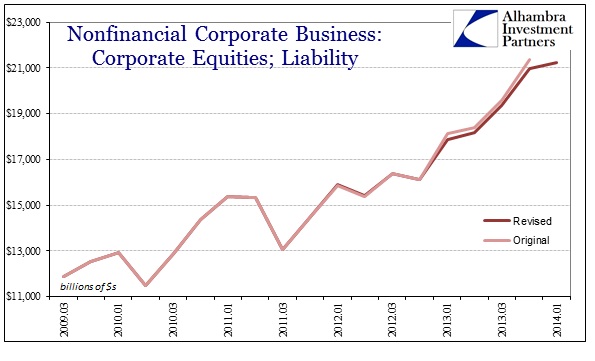 Put these revisions together and the trend in net worth becomes far less of a corroboration of stock price trajectory. It certainly makes the run since late 2012 look far more bubbly and less organic. 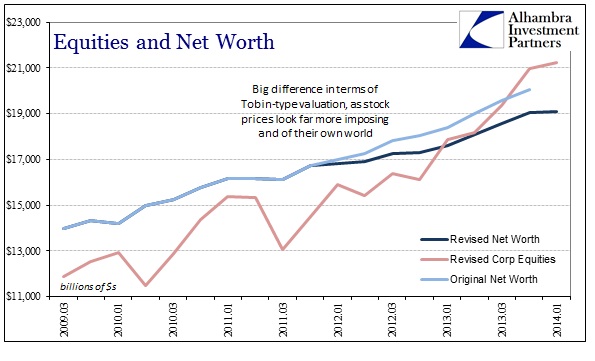 The divergence between them, after revisions, reflects in a Tobins Q ratio that looks more dot-com than Recovery Summer, fifth attempt. 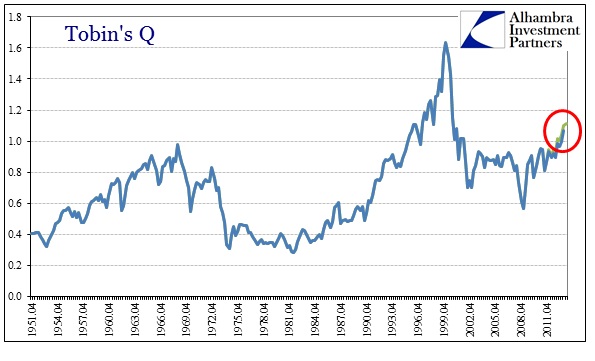 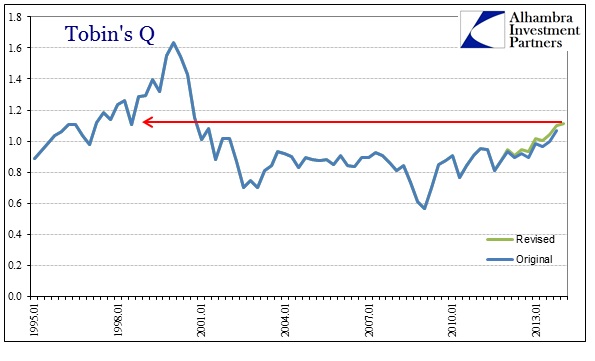 That sentiment is also contained in comparing corporate equities to GDP. Now, there are some drawbacks to using GDP as a valuation anchor, particularly in that companies (mostly larger) derive more of their “balance sheet” from overseas, and even profitability at the margins coming from Rest of World, so we should expect an increase in trend/valuations over time. In other words, if companies are becoming bigger as a result of foreign expansion in addition to US economic growth, you would expect equity prices to rise at a rate greater than GDP. That would lead to an upward slope or bias in the ratio of prices to GDP throughout. 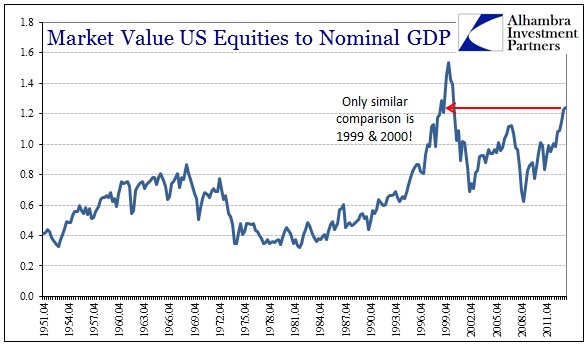 It would be nice, I suppose, if that ever happened at a more measured pace and to a competent degree, but financial systems are often exuberant interchanged with a fearful degree of repellent. The lumpiness to which the stock market overlays GDP is thus relevant and indicates exactly what we see through Tobins Q and elsewhere. Stock prices in 2014 should be at a greater multiple of GDP than 1980, for example, but to where the only similar comparison is 1999 or 2000? That’s not a measured pace.

There is another element here in the Tobin side that I think should also be addressed. To some degree the numerator and the denominator are self-reinforcing. More than half (53% in Q1 ’14) of the measure of nonfinancial corporate net worth is derived from the market value of commercial real estate. If asset inflation is actually impacting both stock prices and real estate prices simultaneously, Tobins Q would be compromised as a bubble detection tool to some unsatisfactory degree. While there is no straightforward alternate, we can at least adjust nonfinancial corporate net worth for the market value of commercial real estate to come up with a modified estimate absent that corruption. 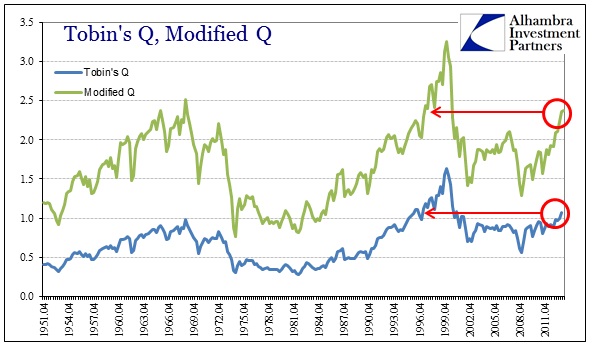 Again, this is far from perfect as a workaround, but I do think it adds significant granularity to the idea. The Modified Q number has risen remarkably faster without the buzz of commercial real estate prices adding to “net worth.” That suggests we might indeed be observing somewhat of the circular logic of asset inflation – asset prices rising in both the numerator and the denominator cancel out to some significance as shown above.

Despite all this stale and imperfect data, I think it adds at least two important pieces to the bubble picture. First, nonfinancial businesses struggled to a far greater degree than initially thought, at least in these figures (undermining the “strength of economy” argument considerably) dating back (one more time) to 2012. Second, absent the mesmerizing spell of asset price reflation/inflation in commercial real estate, the “economic” portion of corporate balance sheets is far, far less of a boost toward justifying equity exuberance.

If there is a third conclusion it is to reiterate that bubbles are the overriding appeal of rationalizations, derived from a great deal of self-reinforcement. Prices rising in one segment justifying prices rising elsewhere would certainly count on that score, and all with the common stain of monetarism behind them. It is very telling that even with commercial real estate prices pushing the denominator, stock prices have so clearly over-accelerated even that rationalization as to limit comparisons to only dot-com mania.